Well hello, everyone. Welcome to the first installment of my weekly NBA betting breakdown. I’ll be giving out a few picks every Wednesday; sometimes more, sometimes less — depending on how good the board is.

Just to go over a few things, the betting categories are separated by how much I like the picks. And much like the creators of “Alvin and the Chipmunks: The Squeakquel” I’m also terrible at naming things, so the categories are all basketball-inspired cliches:

As you can see, it’s all very scientific and highbrow. With the formalities out of the way, thanks again for reading. And if you would like to yell at me for my picks, you can do so on Twitter @BenWittenstein, but please follow me first so that I can at least get my follower count up before being screamed at online.

Chicago Bulls (-5) over Detroit Pistons: Because I want to have the utmost integrity as a ~journalist~, I would like to fully disclose that I am a Bulls fan. With that being said, what I’m feeling about them is quite foreign to me. Is it… optimism? Excitement? I don’t know how to properly explain the positive feelings I have for the new-look Bulls because it’s been so long since they’ve been good. They look like a team that’s been playing together for years, with scoring coming from multiple players in unique and effective lineups.

The Pistons will be without No. 1 overall pick Cade Cunningham, who’s out with an ankle injury, and they don’t yet have the talent to take on a Bulls roster of this caliber. In the simplest terms, the Bulls look ready to go while the Pistons still have lingering injuries and are a team that hasn’t really played together yet. Give me the Bulls all day.

Timberwolves (-6.5) over Houston Rockets: This is a very young and inexperienced team playing against a slightly older, more experienced club in Minnesota. The T-Wolves had some time to gel together and figure out how to work around Karl-Anthony Towns and rising star Anthony Edwards.

On the other hand, the Rockets are going to experience plenty of blowouts early on this season. Sure, No. 2 pick Jalen Green will provide some entertainment, but this team’s experience and firepower will take some time to develop. Fading the Rockets against the spread early in the season is the route I’m taking.

Michael Porter Jr. O2.5 threes: MPJ is one of the most fascinating NBA players. He’s got the ideal frame and shooting ability to be an incredible star, yet there are times when his play has you asking aloud, “What is he doing?!” But this will be Porter Jr.’s third season healthy, and my gut says he’s going to make the next step in his career.

He attempted just shy of seven three-pointers a game last year, almost hitting three of them per contest. And without Jamal Murray in the lineup for a while, the Nuggets expect him to be the team’s second offensive option and likely will have offensive sets built around his shooting. He’ll get his looks from three, so asking him to make just three of them seems like a solid bet.

Portland Trail Blazers Team Total O120.5: I may have said on the Points in the Paint Podcast that Damian Lillard is my pick for MVP — please do not @ me. So it’s no surprise that I’m high on the Blazers, which has never gone wrong for me before (extreme sarcasm).

If I’m going to pick the Blazers to score a ton of points, I really like my chances against the Sacramento Kings. You see, the Kings gave up the third-most points per game last season and really didn’t add anyone that’ll elevate their defense. This seems like the Blazers’ “last ride” with their core, so I’m banking on them coming out of the gates fast and furious.

Nuggets ML (+205): You know what, because it’s the first article of the season, I might as well throw out a relatively long moneyline pick. Sure, the Nuggets don’t have Jamal Murray, and sure, Nikola Jokic — my large, adult, doughy son — just had a child, claims he never naps, and had his coach say he was a bit “fatigued” to start the season, but I kinda like this spot.

The Nuggets have recently been one of the better teams after a loss, and boy are they coming off a big one, aka a series sweep against these very Suns last season. If there’s going to be a long-shot ML bet to make tonight, it might as well be this one. 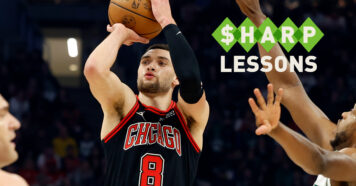 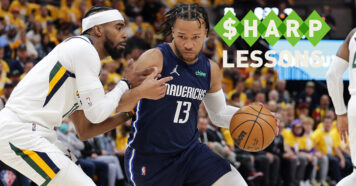 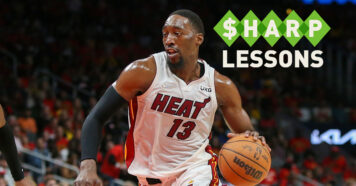