NCAA Tournament Projections As of Feb. 11

Every year, there is at least one mid-major who finds itself on the bubble. Generally, these teams have a gaudy record, have played very few Quad One games and usually have a triple-digit strength of schedule. With just a few weeks left until Selection Sunday, the committee finds this dilemma on their plate again, this time in the form of Loyola-Chicago.

The issue hasn’t really been a concern until now, as the Ramblers led the Missouri Valley Conference for most of the season. After a recent loss to Bradley, that lead has been relinquished to Northern Iowa, a team that has no chance at an at-large selection.

That leaves us to decide if Loyola is worthy of an at-large bid.

The Ramblers have an 18-5 record and a SOS of 102. Their combined Q1 and Q2 record is 4-5, with their best win coming against #42 San Francisco. Their other three wins are over Missouri State, Vanderbilt and DePaul, none of whom are in the current field. There are two comparisons to make with Loyola. The first is to compare them to two Ohio Valley teams: Belmont and Murray State. Belmont currently sits in my Next Four Out, while Murray State would be in the same general area if they were an at-large (but the Racers currently sit atop the OVC, so they aren’t in the at-large discussion). Belmont and Loyola really have remarkably similar resumes — with the Ramblers gaining a slight edge.

The second comparison would be with one of the last teams in the field, North Carolina. Neither the Tar Heels or the Ramblers have any high-quality wins. UNC’s best wins have come against Virginia Tech, Michigan and Virginia. While the resumes are similar, UNC has a much better SOS, and the predictive and quality metrics also favor the Tar Heels.

Unless mid-majors give the committee a reason to include them in the field, the committee has historically excluded them. With very limited opportunities left on their schedule, one would think Loyola will be on the outside looking in.

Each week the Bracketology by TKBrackets podcast looks at the most recent bracket and highlights teams that have made moves. Each episode will also have a guest to discuss the world of college hoops. Guests will include the top bracketologists in the country, NCAA staffers who help put the bracket together, former committee members and the biggest names in college basketball. This week we spoke with Dave Ommen of Bracketville. 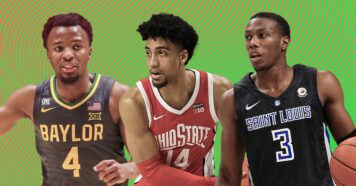