NEC Basketball Coaches Rank the Best Jobs in the Conference

This is how polling in the NEC shook out among coaches who voted, with one being the best and 10 being the worst: 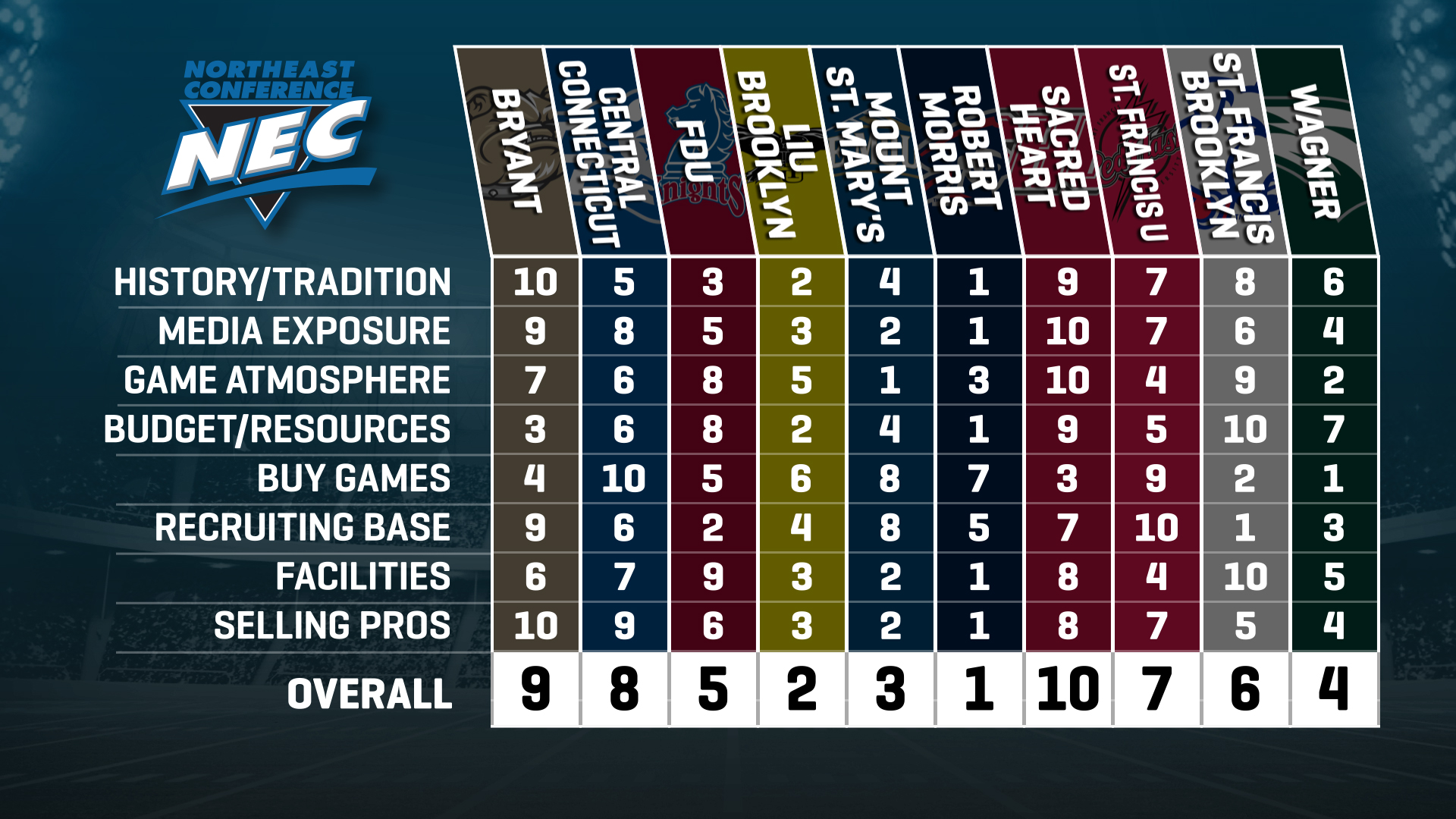 Where they win: “New facility, tradition is the best in the league, administration supports the program and Pittsburgh is a vastly underrated city with plenty to sell.” – NEC head coach

Where they win: “The city of Brooklyn for sure, and also the tradition and the gym.” – NEC assistant coach

3. Mount St. Mary’s (57) – The Mountaineers have played in the NCAA tourney five times – in 1995, ’99, 2008, ’14 and ’17. The program was a long-time power in the D-2 ranks under Jim Phelan. The Mount ranks first in game atmosphere, second in TV exposure, facilities and also selling pros, but is towards the bottom of the league in recruiting base and also buy games.

Where they win: “Tradition, fan and community support and the arena and practice facility. The administration also really supports the program especially since there’s not much in the area.” – NEC assistant coach

The knock: “Location to the rest of the league. It’s kind of in the middle of nowhere.” – NEC head coach

4. Wagner (56) – The Seahawks have won three conference titles, but have just one NCAA tourney appearance – in 2003 under Dereck Whittenburg. Mike Deane had some success, and so did Dan Hurley and current coach Bashir Mason, who has won a pair of regular-season crowns. Wagner ranks first in the league in buy games, second in the league in atmosphere and third in recruiting base.

Where they win: “The recruiting base in the Metropolitan area. Easy access to a lot of players. It’s a good, safe suburban campus in a city environment.” – NEC assistant

The knock: “The facilities and the resources need to be upgraded.” – NEC head coach

Where they win: “Location. They can recruit New Jersey, New York City, Philly and even Baltimore and DC. There’s also a tradition – whether it was under Tom Green or the current staff. The school also cares about men’s basketball.” – NEC assistant

The knock: “It’s a commuter school, so there’s inconsistent support from students. Also have to step up the operating budget.” – NEC head coach

6. St. Francis-Brooklyn (37) – The Terriers are actually the oldest college program in New York City. They have won six regular-season titles, but have yet to appear in the NCAA tourney. The recruiting base is the best in the league, but the Terriers rank in the bottom three in four categories: History, game atmosphere, budget/resources and facilities.

Where they win: “There’s really not much. Maybe the temperature in the gym. It’s really hot in there. It’s a unique place, but they can get tough, city kids because it’s not conventional.” – NEC head coach

The knock: “Facilities, the lack of a campus. It’s the most unique D-1 job in the country in that the entire campus is in one building. The gym is on the first floor and the dorm situation is challenging. It’s not typical.” – NEC head coach

7. St. Francis U (35) – Jim Baron led the Red Flash to its lone NCAA tourney appearance in 1991. There have been 21 losing seasons since ’91, but current coach Rob Krimmel has had the program at least .500 in four of the past five years. The recruiting base is the worst in the league, and the Red Flash don’t rank in the top three in any category.

Where they win: “They have stepped up the resources recently and upgraded locker rooms, weight rooms and other facilities. They are also one of the only teams in the league to give cost of attendance.” – NEC assistant coach

The knock: “The location. It’s a tough place to get to, so remote.” – NEC head coach

8. Central Connecticut (31) – The Blue Devils have made three NCAA tournament appearances – in 2000, ’02 and ’07 – with all three coming under long-time coach Howie Dickenman. They have been in the D-1 ranks since 1986. CCSU ranks in the middle of the league in most categories, but dead-last in buy games.

Where they win: “The campus. It’s a little commuter, but it’s still a true campus, and it’s the biggest school population-wise in the league.” – NEC head coach

The knock: “The facilities. It’s like a high school gym.” – NEC assistant

9. Bryant (30) – The Bulldogs began their transition into the D-1 ranks in 2008, so there isn’t much history. Bryant ranks last in that category, last in selling pros and ninth in both TV exposure and recruiting base. Tim O’Shea did have a couple of strong seasons in 2013 and ’14, but Jared Grasso has some work to do. The positive is that there is financial support.

The knock: “No basketball tradition and strong academic school in a conference with mostly non-academics.” – NEC head coach

10. Sacred Heart (24) – The Pioneers went D-1 in 1999 and have yet to make an NCAA tourney appearance. Dave Bike had three winning seasons in the span of 1999-2013, and current coach Anthony Latina has yet to post one in six years — but is coming off a 11-7 league mark. Sacred Heart checks in at the bottom two in four categories.

Where they win: “The recruiting area. Can get kids from New England preps, Connecticut and even New York and Philly. Campus, location and resources have improved.” – NEC head coach

The knock: “No history or tradition, and a lot of the best players wind up transferring. The place has so many sports, and that means splitting up the pie so many ways.” – NEC head coach