With three Thanksgiving matchups on Thursday, I wanted to give my thoughts on the Week 13 slate as soon as possible. Using Tuesday’s point spreads, here is a breakdown of all 16 games.

Note: I will take a closer look at the Sunday and Monday games on a Periscope show I host called Weekend Warriors. The show starts an hour before college football games kickoff on Saturday at 11 a.m. ET and can be seen on Stadium’s Periscope channel or Stadium’s Twitter.

Bears (-3) at Lions: The Bears are out to a field goal favorite due to the long injury list for the Lions on a short week. The most notable injured player that impacts the line is Lions quarterback Jeff Driskel. The other quarterback on their roster is undrafted rookie David Blough. This line will move depending on who’s in at QB.

Bills at Cowboys (-6.5): The Cowboys are coming off a loss in a game against the Patriots where most of the country watched, but they still covered the spread (and outgained New England by a net of 1.1 yards per play). The bad weather played a huge factor in this game, and they now get to face an overvalued Buffalo team in perfect conditions. Dallas will be a popular leg to tease down — especially since this is a Thanksgiving game.

Saints (-7) at Falcons: The Saints will be the other popular teaser side to pair with the Cowboys. This is a revenge game for New Orleans after they lost as 13.5-point favorites in Week 10. That being said, the Saints teaser leg is the only way I would play this game.

Packers (-6.5) at Giants: The main reason this line has dropped from Packers -7.5 is that Green Bay was dominated on Sunday night by San Francisco. The Packers recorded less than 200 yards and only had 2.8 yards per play, while giving up 7.5 yards per play to the 49ers. This might be a good spot for Green Bay to bounce back, but when it comes to their season outlook, they are clearly overvalued because of their big-name quarterback and 8-3 record.

Redskins at Panthers (-10): I don’t have many thoughts on this game. The line is probably right, but I’m concerned this will be a flat spot for Carolina coming off the heart-breaking loss at New Orleans, which pretty much ended their playoff hopes.

49ers at Ravens (-6): The Ravens have won and covered the spread in their last five games by a combined 128 points. The market and bettors haven’t caught up to Lamar Jackson and this Baltimore side, but this line might be the game where they are properly priced. The 49ers are arguably the best team in the NFC, and you’re paying a premium to bet on Baltimore at this point. It might not be a game to bet, but it’s certainly one game you’ll want to watch this Sunday.

Titans at Colts (-3): This is a huge game for the AFC playoff picture. I believe the line is right, as it indicates these teams are equal on a neutral field. The Titans are coming off an impressive performance where they recorded 9.1 yards per play on offense against the Jaguars last week, while the Colts are a well-coached team that had extra time to prepare because they played last Thursday. If the line dropped to 2.5 I would like the Colts, and if it got back to 3.5 I would lean on the Titans.

Eagles (-9.5) at Dolphins: This is a game I will stay away from. I don’t want to lay a big number with the Eagles on the road, and it looks like the Dolphins are once again committed to their losing ways.

Raiders at Chiefs (-9.5): The Raiders trail the Chiefs by only one game in the AFC West, but this line gives a better indication of where these teams are. Patrick Mahomes was able to get healthier during the bye week, so I could only look towards Kansas City here even though they are laying a big number.

Buccaneers at Jaguars (-1): Before Week 12’s results, the Jaguars were favored by 4.5 in this game. Then the Buccaneers won straight-up and the Jaguars were handled by the Titans to fall to 4-7 on the season. The line value isn’t there on Tampa Bay, but I don’t have much interest taking Jacksonville.

Jets (-3.5) at Bengals: This line went from Jets -4.5 to -3.5 after Andy Dalton was re-instated as the starting quarterback on Monday. He’s an upgrade over Ryan Finley, and he might be enough for me to consider betting on the Jets, who have had recent success against very bad teams.

Rams (-3) at Cardinals: Like the Panthers, I’m concerned about betting on the Rams because their playoff chances took a huge hit in Week 12. Arizona is coming off a bye week, so I would expect a strong effort from them.

Chargers (-2.5) at Broncos: This game opened as a pick ’em, and the Chargers have taken the early money. Los Angeles is coming off a bye week while Denver fell flat at Buffalo last week. I agree with the line move, but a lot of the value is lost with the Chargers at this number.

Browns (-2) at Steelers: Two weeks ago, the Browns were favored by three against the Steelers in Cleveland. Now they are a two-point favorite on the road. If this line gets to Steelers +3, I’ll certainly be on Pittsburgh because I can’t pass up that much line value.

Patriots (-3) at Texans: The look ahead line for this game was Patriots -4.5, and it has trended down to -3 or -3.5 depending on where you bet. There is concern with the Patriots’ offense, and they should get the Texans’ best effort in a Sunday night game at home. With a lot of familiarity between the two coaching staffs, I wouldn’t be surprised if the game started slowly.

Vikings at Seahawks (-3): I have been burned many times by the Seahawks this season, and they are a tough team to fade at home in primetime. But it’s hard to ignore the strong spot for the Vikings coming off a bye week. Minnesota is a better team than Seattle, so there’s value on the road underdog.

NFL Betting: How to Pick the Conference Championship Games

Who should you bet on Sunday? 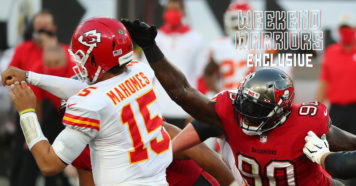 NFL Betting: How to Bet on the Super Bowl

Chiefs vs. Bucs for all the marbles. 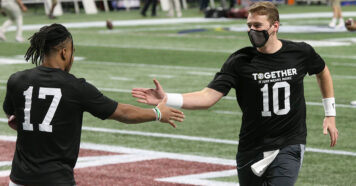 An in-depth betting breakdown of the annual event.