Handicapping and betting NFL Week 17 games is much different than betting a normal regular season week. The two biggest differences are motivation and information.

Motivation is important because we know which teams need to win to make the playoffs or to improve their seed. It’s important to know the information of who is playing their starters and which team might be resting players for the postseason, or in evaluation mode for 2020.

My one piece of advice would be this: Be cautious betting on teams in must-win situations because that is factored into the point spread. Must-win doesn’t mean they will necessarily win, and you lose line value backing teams in those situations.

I’m going to take an early look at the Week 17 games and point spreads. The lines are as of Tuesday afternoon so they could move from now until Sunday as information continues to come out about how teams are approaching each game.

Note: I will take a closer look at all the games on a Periscope show I host called Weekend Warriors. The show starts on Saturday at 11 a.m. ET and can be seen on Stadium’s Periscope channel or Stadium’s Twitter.

Games that matter for the AFC playoffs

Titans (-3.5) at Texans: The Titans will make the playoffs as the No. 6 seed with a win. The Texans clinched the division in AFC South in Week 16. Houston is currently the No. 4 seed and can move up to No. 3 with a win and Chiefs loss. Kansas City plays earlier in the day so Houston will likely know if they have a chance to improve their seed before their game begins. Texans Head Coach Bill O’Brien said his team is planning to play for the win, but I would be surprised if their best players played unless the Chiefs lost. The motivation is clearly built into this line, as the Titans were a three-point home favorite against the Texans in Week 15. If this game was to decide the division, I would guess the Texans would be a three-point favorite so there’s about a 6.5-point adjustment in the line with the Titans needing the win and the Texans already guaranteed a home playoff game on Wild Card weekend.

Colts (-3.5) at Jaguars: Neither team can make the postseason, but the Colts need to win to help the Raiders’ keep their slim hopes alive. That’s likely why this game was moved to the late afternoon and in the same time slot with the other games that matter for the last Wild Card spot in the AFC.

Steelers (-2.5) at Ravens: The Ravens wrapped up the top seed in the AFC in Week 16 and have already announced that some starters won’t play, headlined by soon-to-be MVP Lamar Jackson. He’ll be replaced at quarterback by Robert Griffin III. If the Ravens needed this game, they would be a double-digit favorite hosting the Steelers. Pittsburgh needs to win and a Titans loss to make the postseason. Even though the Steelers are the far more motivated team, I don’t think I could bet on Devlin Hodges on the road. Also if the Steelers find out the Titans are winning big, they might lose motivation in the second half.

Dolphins at Patriots (-15.5): The Patriots just need to win and they’ll clinch the No. 2 seed. I would trust them to do that, but not to cover a big number like this.

Chargers at Chiefs (-8.5): The Chiefs are currently the No. 3 seed in the AFC. They would move up the No. 2 with a win and Patriots loss. They could drop to No. 4 with a loss and a Texans win later in the day. They’ll be motivated to win this game against a Chargers team just playing out the season. My concern is if the Chiefs find out the Patriots are up big, then Andy Reid might pull some starters including Patrick Mahomes. I would recommend looking to bet on the Chiefs to cover the first half spread.

Raiders at Broncos (-3.5): The Raiders need to win this game and get a lot of help to somehow sneak in. The Broncos can’t make the postseason, but they have played hard down the stretch and would love to beat their division rival.

Games that matter for the NFC playoffs

Redskins at Cowboys (-10.5): The Cowboys let an opportunity to clinch the NFC East slip away with a loss to the Eagles in Week 16. They are going to need to beat the Redskins and hope the Giants beat the Eagles to win the division at 8-8. You have to consider Dallas’ mindset going into this game, especially since they had a chance to clinch the division last week. I can see a flat start from the Cowboys and maybe they’ll be scoreboard watching to see if the Giants are staying competitive against the Eagles. Case Keenum will get the start for Washington and he might be a small upgrade over rookie Dwayne Haskins.

Saints (-13) at Panthers: The Saints are playing for a first round bye. This would be vital for a team like New Orleans, who have a very strong home-field advantage. Of course, that factor is built into this line along with the fact that the Panthers have greatly fallen off since Ron Rivera was fired.

Eagles (-4.5) at Giants: In Week 14, the Eagles needed overtime to defeat Eli Manning and the Giants in a game where Philadelphia was a nine-point home favorite. Now theres’s a quick rematch and Giants quarterback Daniel Jones is back from an injury that kept him out of the previous meeting. All the pressure is on the Eagles, as a win clinches the division and a home playoff game. The Eagles have been injury-plagued all season and those issues continued against the Cowboys on Sunday. Tight end Zach Ertz suffered broken ribs before eventually returning, and starting cornerbacks Ronald Darby and Jalen Mills both exited early. Mills was able to come back in the game, but it looks like Darby will at least be out this week. At this point in the week, I would look at betting on the Giants plus the points. There is inflation in this number because the playoff motivation for the Eagles, but the Giants have shown life in the last three weeks and Head Coach Pat Shurmur would love to win this game to help keep his job.

Packers (-12.5) at Lions: The Packers played their strongest game of the season in Week 16 to clinch the NFC North and put them in a great position to have a first round bye. The Packers just need to beat the Lions to earn the bye and a home game in the second weekend of January. Before the Packers beat the Vikings on Monday, the line for this game was Green Bay -9.5 so you’re losing a lot of value if you took Green Bay at the current number.

49ers (-3) at Seahawks: This game has been flexed to Sunday night and is the last game of the regular season. They winner wins the NFC West and the 49ers would clinch the top seed in the NFC playoffs with a victory. The loser goes on the road for the first week of the playoffs. Before the Week 16 games, the line for this game was a pick ’em. The 49ers beating the Rams and the Seahawks losing to the Cardinals was a reason the line quickly got the 49ers -3 when the game re-opened Sunday evening. The other reason is the Seahawks injury list getting longer with running backs Chris Carson and C.J. Prosise suffering injuries that will keep them out for the year. This game is one of the most important of the NFL season and could determine how the NFC playoff will play out. The 49ers are the only way I could look, but some value is lost at the current number.

Games that don’t have playoff implications

Bears at Vikings (-1): Before the Vikings lost on Monday night in Week 16 the line for this game was Minnesota -7. Now the line has dropped six points, as the Vikings lost their chance to win the division and are locked into the No. 6 seed for the playoffs. I wouldn’t be surprised if the Bears closed as the favorite, as I would image Minnesota will rest some players for a road Wild Card game next weekend.

Browns (-2.5) at Bengals: The Bengals clinched the worst record in the NFL in Miami last week. This seems like a possible spot to bet on Cincinnati with the No. 1 pick in the NFL Draft secured and the Browns being officially eliminated from postseason contention last week.

Falcons at Buccaneers (-1): Two teams that started the season slow, but have played solid football down the stretch. The Buccaneers are banged up at the wide receiver position so this line is probably correct.

Jets at Bills (-1.5): The Bills are locked into the No. 5 seed in the playoffs. The Jets showed some life with an upset of the Steelers in Week 16. This line suggests that Buffalo will sit most of their starters.

Cardinals at Rams (no line): Cardinals quarterback Kyler Murray left Sunday’s win in Seattle with a hamstring injury and was replaced by Brett Hundley. That’s the reason a line for this game hasn’t been posted and we likely won’t see one until we know Murray’s status.

MORE: Remember These Five Tips Before Betting on Bowl Games 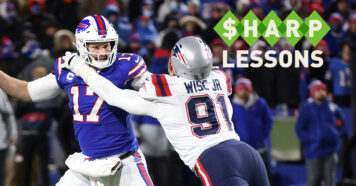