During the NFL season, Stadium sports betting analyst Nate Jacobson will break down every single point spread using lines as of Friday morning. Here are his thoughts on the Divisional Round.

Note: Nate will discuss all of his NFL bets on the Sharp Lessons podcast that drops every Wednesday and Friday. Subscribe on Spotify and Apple for episodes and follow Stadium Bets on Twitter for more sports betting content.

Bengals at Titans (-3.5): This is the only game of the weekend where there isn’t a previous matchup between the two teams this season. Because of that variable and several other factors, I don’t have a solid feel for what to expect in this game.

The Bengals are coming off their first playoff win in 31 years, but I was’t impressed with Cincinnati after their 26-19 victory against a Las Vegas Raiders team in a tough situational spot. The Bengals were out-gained on a yards per play basis and only scored two touchdowns in five red-zone trips. The Raiders had early mistakes and red-zone issues of their own, and that’s why Cincinnati won and covered.

The Titans are coming off a first-round bye and receiving a huge piece to their offense back in RB Derrick Henry. The Titans were able to overcome losing their bell-cow in Week 8 to earn the No. 1 seed in the AFC, but their offense struggled without him. Having Henry to go with both A.J. Brown and Julio Jones makes the Titans offense a much more formidable unit and they’ll be facing a Bengals defense without DT Larry Ogunjobi, who was placed on IR after suffering a foot injury in last week’s win.

The line in this game opened Titans -2.5 on Sunday night and quickly got bet to over a field goal. I don’t feel comfortable betting on the Titans as over-a-field-goal favorites, so I’ll likely pass on any pregame bets for this matchup.

49ers at Packers (-5.5): There’s a lot going on in the handicap for this game and it’s been fascinating watching the line move all week. The 49ers opened as a 4.5-point ‘dog shortly after their win over the Cowboys in the marquee time slot on Sunday afternoon. The number climbed to Packers -6 with news out that 49ers QB Jimmy Garoppolo suffered an injury on his throwing shoulder to go along with an already banged-up thumb. The line dropped to Packers -5.5 on Thursday due to optimism that Garoppolo will play.

It appears the 49ers paid a price in the win over the Cowboys, as they also lost two key defensive players in DE Nick Bosa and LB Fred Warner — although it currently appears like both players are trending toward playing. On the other side, the Packers are expected to get healthier with LT David Bakhtiari back in the fold after he made his season debut in Week 18. Green Bay is also hopeful CB Jaire Alexander and pass rusher Za’Darius Smith will return after long absences, but there is some uncertainty regarding how much of a role they’ll play.

If these teams were fully healthy, the current point spread for this game would be too big. The difference between these two isn’t that large, as the 49ers have a clear matchup advantage with their versatile running game, while the Packers’ run defense has struggled this season. But the cold weather with a chance of snow obviously favors the team from Wisconsin, and the Packers are coming off a first-round bye. Meanwhile, the 49ers are playing their third-straight high-leverage road game.

Yes, the Packers have multiple situational edges and could be much healthier, but that’s all built into the inflated point spread. The matchup is too perfect for Kyle Shanahan’s offense, and I’ll be on the 49ers in this game. I would bet them at this number, but I’ll wait to see if it gets back to 49ers +6.

Rams at Buccaneers (-3): These two teams played way back in Week 3 and the Rams won 34-24 at home in a game that closed as a pick’em. A lot has changed since then, but it’s worth noting the Rams also beat Tom Brady’s Buccaneers in Tampa Bay on a Monday night last season.

Both teams are coming off impressive wins last week. The Eagles took a ton of game-day money like they have so often this season but it was all for naught, as the Buccaneers had no problem covering as seven-point favorites. The Rams cruised on Monday night in a 34-11 beatdown of the Cardinals. It was nearly a perfect performance from the Rams’ defense, but they were facing an Arizona team that was spiraling downward on offense since Kyler Murray’s return from an injury in December.

The Buccaneers have dealt with a number of injuries lately and might be without RT Tristan Wirfs, RB Leonard Fournette and center Ryan Jensen. As for the Rams, they’ve got a short week with cross-country travel against the Buccaneers, who played at home in the earlier time slot on Sunday.

How much should you value the Rams’ Wild Card win over the Cardinals? After that dominant performance, you’re not getting a discount on the Rams. This could be an opportunity to get Brady at a cheap point spread in a home playoff game against Matthew Stafford. The Buccaneers side is the way I’m looking in this game, but I’ll wait until closer to kickoff to bet it because I can see a lot of betting support for the Rams based on their last game. I would also consider betting the over at 48.5 because the total in their first meeting was 55.

Bills at Chiefs (-2): I’m looking forward to the first three games this weekend, but this one is the crown jewel of the bunch — and it has “Game of the Year” potential. It’s a rematch of last season’s AFC Championship, in which the Bills couldn’t quite hang with the Chiefs at Arrowhead Stadium. Buffalo made the necessary adjustments in the 2021 regular season rematch by beating the Chiefs 38-20 in Week 5.

The Bills are coming off a ceiling performance against the Patriots last Saturday night. Buffalo scored a touchdown on their first seven drives, and didn’t punt or kick a field goal against Bill Belichick’s defense. As for KC, the Chiefs took 20 minutes to get going, but eventually went on a scoring onslaught to cruise past the Steelers.

I’d like to wait to bet on the home team in the Chiefs. Get their October matchup out of your brain — Kansas City is a much-improved team on both sides of the ball. This is also a game where the loss of CB Tre’Davious White could hurt the Bills for the first time since he went down with an ACL tear on Thanksgiving. The only offense that was good enough to exploit White’s absence was the Buccaneers, and Tampa Bay scored 24 first-half points in that game last month.

Because the Bills are coming off a great playoff performance and receiving a lot of betting attention this week, I’m going to wait to see if I can get a better number on the Chiefs. My likely plan to attack this game is betting the Chiefs on the cheapest moneyline right before kickoff. 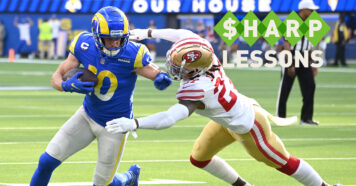 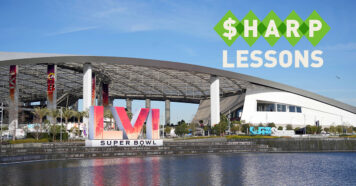 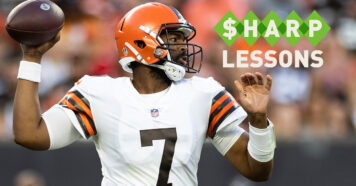