After an offseason like no other, the 2020 NFL season kicks off tonight, which means I’ll be sharing my early thoughts on the point spread for each game throughout the season.

I’m in a season-long competition where I pick seven sides a week using the SuperContest’s lines, so in this weekly breakdown I will unveil my first impressions of the games and point spreads. I hope this can be a guide for people who are in similar NFL pick’ems or looking to bet games.

Note: My picks could change based on information and any news that is not factored into the contest line. I will discuss and finalize these picks on a Periscope show I host called Weekend Warriors. The show will be live for a hour on Sunday at 11 a.m. ET and can be seen on the Stadium Periscope channel or the Stadium Twitter account. After the show, I will tweet my seven picks for the contest from my Twitter.

[RELATED: Bet on These Four NFL Teams Based on 2020 NFL Draft Results]

Here are my thoughts for Week 1.

Falcons (+2.5) over Seahawks: Last year, I started off this article by picking against the Seahawks and I’m going to do the same this year. The Seahawks were 11-5 last season, but had a point differential of +7 (which indicates they were closer to an 8-8 team). Russell Wilson covers up a lot of the team’s issues, but there’s also a point spread tax on Seattle because they have an elite quarterback. The Falcons are a team I’m neutral on this season, but it will likely be Dan Quinn’s last year as coach if he doesn’t lead Atlanta to the postseason. I’m going to take the Falcons in the contest and would bet them if this line got to +3. The best way to bet this game is to tease the Falcons up six points; the Seahawks won 12 games last season, including one playoff victory, and 11 of the wins were decided by eight points or less.

Cardinals (+6.5) over 49ers: I’m bullish on the Cardinals’ offense and quarterback Kyler Murray taking a huge leap in his second season. Wide receiver DeAndre Hopkins will be a big addition to the unit, and I do think they are a good team to bet on as underdogs because they have the ability to score a last-second touchdown to cover a game late. I still rate the 49ers highly, but this is too many points in a game that will be played without fans.

Patriots (-6.5) over Dolphins: Last year, these two teams played in the same stadium for Week 17 and the Patriots were favored by 17.5. Sure, the Dolphins pulled off a shocking upset over a Pats team playing for a postseason bye, but I think there’s now an opportunity to buy low on New England. Not knowing what to expect from new quarterback Cam Newton is what’s holding me back from using the Patriots as one of the selections.

Browns (+8) over Ravens: The Browns are a team I’m buying this year. They were overvalued last season and let a lot of people down, so now is a good time to buy low. Picking them as an eight-point underdog would seem like an easy decision in a contest, but I’m worried about this specific spot. The Browns are already banged up on defense, which is a problem when facing Lamar Jackson and the Ravens. I can also see the Browns’ offense struggling in the first game under new coach Kevin Stefanski. I’ll consider the Browns here, but I believe there will be better opportunities later this season to bet on Cleveland.

Panthers (+3) over Raiders: I’m down on the Raiders this season and bet them under their regular season win total of 7.5. But there are plenty of concerns with the Panthers, who have a new coaching staff, new quarterback and porous defense. This line is too high to take the Raiders now that it has moved to three, so the Panthers might be the play.

Washington (+5.5) over Eagles: The Eagles were plagued by injuries last season and that same trend has begun before the first game of 2020. Wide receivers Alshon Jeffery and Jalen Reagor are out, and the Philly offensive line is in flux. Washington has a new coaching staff and the offense could struggle with continuity, but they might have a huge edge when it comes to a pass rush led by rookie DE Chase Young. I would’ve liked this pick more when the line was at +6 earlier, but I will still consider the contest number.

Bears (+3) over Lions: I planned on ignoring this game, but then a late line move led to Bears +3. One reason the surge came was because bettors believe in the Lions with a healthy Matthew Stafford at QB. Another factor was the Bears giving the nod to Mitchell Trubisky to start over Nick Foles. I’m personally not buying Detroit because I question their defense — especially the defensive line — and I’m not a fan of Matt Patricia. While Trubisky has greatly underachieved in his career, there isn’t a drop-off between him and Foles from a point spread perspective. Now that the number is at a full field goal, I’ll take the Bears in what I expect to be a tight division game.

Colts (-8) over Jaguars: This line is inflated, and I never lay a hefty spread like this with the road team favored in the NFL. However, the Jags are the worst team in the NFL and it might be smart to pick against them until the market catches up. Teasing the Colts to under a field goal would be the preferred way to bet this game.

Saints (-3.5) over Buccaneers: I thought the Buccaneers would be a team that could go under the radar and provide betting value in 2020 before free agency began. That was until the team signed Tom Brady and the betting market overreacted to their offseason additions. The Bucs are a team I’m going to sell on a game-by-game basis and I believe this is a good spot to start. The Saints won’t have their normal home-field advantage, but they are the better team and there’s an opportunity to sell high on Tampa Bay.

Rams (+3) over Cowboys: I really like the Cowboys to do well this year, while I’m down on the Rams. However, I could only look at the Rams at this number in this unique spot. I would argue no fans in the stands for this game at the new SoFi Stadium is a good thing for the Rams because when Dallas plays in Los Angeles, they have at least the same amount of fans — if not more.

Texans at Chiefs (-9): There are a few reasons I will be avoiding Thursday night games this year. The first is the contest I’m in doesn’t include that game as an option to pick as one of my seven selections. I also prefer not to lock in any picks and wait until I get all the information I can on the other games before making my final decision on Sunday morning. But since this is an isolated primetime game, I’ll give my thoughts for those interested in betting on a Thursday. I would lean with the Texans in the opener. Remember that these two teams played in the playoffs last year and Kansas City was favored by 10 points in a game with a full stadium. The Chiefs are scary to bet against, but I would pick the Texans if I was forced to take a side.

Jets at Bills (-6.5): The Jets have many question marks this season with a head coach possibly on the hot seat, a defense without C.J. Mosley (opted out) and Jamal Adams (traded), and a thin wide receiver group that is already battling injuries. The Bills are primed to make a run at the AFC East this season, but I don’t trust quarterback Josh Allen to cover a point spread this big without their usual raucous home crowd.

Packers at Vikings (-2.5): Two playoff teams from last year that I expect to regress this season. Green Bay was a very lucky 13-3 in 2019 and they didn’t improve through free agency or the draft this offseason. The Vikings have numerous new faces on defense and uncertainty at the wide receiver position after trading Stefon Diggs. The line has moved from Vikings -3.5 to -2.5, so I would take Minnesota if I was forced to bet, but there are other options to consider.

Chargers (-3) at Bengals: The Bengals are tempting as home underdogs against a Chargers team that is average at best. I need to see rookie QB Joe Burrow play in a live game before considering Cincinnati as a pick this season.

Steelers (-6) at Giants: I would’ve looked towards the Steelers in this game when the line was Steelers -3.5 over the summer. Now with the line up to six, I would only consider the Giants, but all the factors that come with a new coaching staff for New York has me off this game.

Titans (-2.5) at Broncos: At one point this summer, the Broncos were a three-point favorite in this game. The line has trickled down since then, and there was a bigger line move on Tuesday night after news broke about Von Miller’s potentially season-ending injury. The Broncos historically have a strong edge over other teams in September home games because of the Denver altitude. But I would need this spread to be +3 to consider them, so I’ll avoid this game. 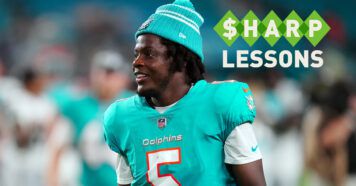 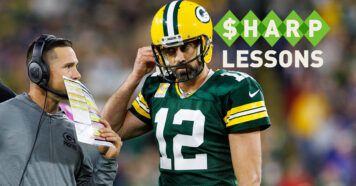