Picking NFL games continued to be a struggle for me in Week 10 as I scratched out a 2-4-1 record. I was fortunate to win with Washington and the Cardinals, so even that record doesn’t feel good. It’s a tough sport to bet, but there’s an opportunity to bounce back this week.

I’m going back to separating my picks in three categories, but I will keep the “I need more information” section because I don’t want to rule out any games in the middle of the week.

Here are my thoughts for Week 11.

Texans (+1.5) over Patriots: There has been a significant adjustment in this game since last week. The look-ahead line was Texans -2.5, and that was the spread after Houston’s loss in windy Cleveland and before the Patriots kicked off as seven-point underdogs against the Ravens on Sunday night. The weather cooperated with New England’s game plan and they pulled off the outright upset at home. Now the Patriots have been installed as a favorite, but I don’t think the line move is justified. The Texans should be a short favorite in this game, which is why they’re one of the strongest teaser legs of the week. There’s real value in the spread because New England is getting too much credit for beating Baltimore in a rainstorm.

Jaguars (+10) over Steelers: Two weeks ago, I considered taking the Cowboys as a 14-point home underdog against the Steelers because Mike Tomlin-coached teams have a few performances a season where they play down to their competition. That’s in play this week as the Steelers are a double-digit road favorite and also have a huge rematch against Baltimore coming on Thanksgiving night. The Steelers barely beat the Cowboys in that game, and I can see the Jaguars staying within the number here.

Chiefs (-7.5) over Raiders: I usually don’t bet road favorites of over a touchdown, but the situation sets up well for Kansas City. The obvious trend that will be mentioned is that Andy Reid-coached teams are 18-3 off a bye week — and the Chiefs were idle last week. Kansas City has won and covered in five of their last six games after a regular-season bye. There’s also in-season revenge in this game, as the Raiders upset the Chiefs in Kansas City earlier this season and the Las Vegas team buses circled Arrowhead Stadium after the victory. Reid referenced it this week, and KC will be fully focused on revenge. The line moved to over a touchdown with the Wednesday report revealing that most of the Raiders’ starting defense is going on the COVID-19 reserve list. I would wait to see if the line goes back to Chiefs -7, but I’ll likely use them in the contest regardless.

Cowboys (+7) over Vikings: This line got up to Vikings -9 at some sportsbooks on Tuesday, which was the morning after Minnesota won and covered as 3.5-point favorites against the Bears. Minnesota extended their win streak to three since the bye week, and Kirk Cousins picked up his first Monday night win in 10 attempts. The line has dropped to a key number of -7 because the Cowboys are coming off a bye week, with Andy Dalton having a chance to start in this game for Dallas. I would still consider the Cowboys here because of the rest advantage and would also consider them even if Garrett Gilbert starts at QB instead of Dalton.

Broncos (+3.5) over Dolphins: The Dolphins are on an impressive run, but you’re paying a premium if you want to bet them now. The look-ahead line was a pick’em for this game, and it has adjusted 3.5 points after the results from Week 10. I understand that some kind of line move was needed, but I think going through a key number of three is too much. The Broncos’ quarterback situation is dicey, but this game will be Denver or ‘pass’ for me.

Jets (+8.5) over Chargers: I have put my faith in the Chargers the last few weeks and they have let me down just like they have the last few years. That being said, anytime an Anthony Lynn-coached team is a big favorite, I will always look to fade them. This week is no different even though they welcome in the NFL’s worst team. The Jets are coming off a bye week and Joe Flacco looked like a serviceable quarterback the last time we saw New York on a Monday night against New England.

Rams (+4) over Buccaneers: I don’t think much separates the Buccaneers and Rams, so I believe there’s line value on Los Angeles at anything more than a field goal for this Monday night game. There are some matchups I want to do more research on — especially since the Rams will play their first game this season without offensive lineman Andrew Whitworth and Jared Goff struggles when he faces pressure. However, my early lean is on the Rams.

Cardinals at Seahawks (-3): This is a really good Thursday night game that I won’t have a bet on. I think the line is correct, but look forward to watching this one.

Eagles at Browns (-3.5): The last two Browns games in Cleveland were greatly impacted by the weather, specifically the wind. I’m going to hold off betting a side in this game until we know more about the weather, which looks like it might include rain on Sunday afternoon.

Falcons at Saints (-4.5): The line for this game would’ve been Saints -7 with a healthy Drew Brees, but the updated line for this one should be Saints -5.5 because I think the downgrade from Brees to Jameis Winston is worth 1.5 points at the most. While there’s now a point difference there, NFL games hardly end in a five-point margin, so there’s not enough line value for me. This is also a pretty good spot for the Falcons coming off a bye. Speaking of which, do you remember that Atlanta won at New Orleans as 14-point underdogs last year in the game following their bye week? I think there’s a case to be made for both teams this weekend, so I need more time to decide if I want to bet this game.

Lions at Panthers (-2.5): Both starting quarterbacks in this game are questionable injury-wise, so I’ll have a wait-and-see approach with this one.

Packers at Colts (-1.5): The Packers were -2.5 on the look-ahead, so it’s another game with a big line move based on last week’s results. I agree with the adjustment in this game after the Colts’ win on Thursday night and the Packers’ tight victory over the Jaguars at home. I believe the line in this game is right, so I’ll likely stay away.

Bengals at Washington (-1.5): My numbers make the Bengals -0.5, but I think the contest/market line makes a lot more sense. I’m not going to bet either side, but Cincinnati on a teaser to +7.5 is something I’ll consider.

Titans at Ravens (-6.5): There’s a lot of intriguing factors in this game, but I’m not sure what to make of them right now. This game is a playoff rematch from when the Titans shocked the league and won 28-12 as 10-point underdogs to end the Ravens’ 12-game winning streak. Both teams are now 6-3 and coming off primetime losses. The Titans have extra rest because they played on Thursday, while the Ravens have a game upcoming against the Steelers on Thanksgiving night. However, the line at -6.5 shows there’s still a significant gap between the teams. I can see the Titans being a popular pick this week, but I’m likely not going to be involved. 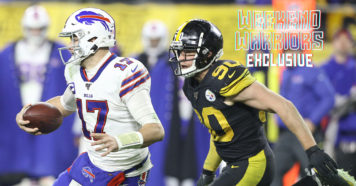 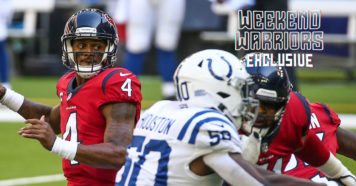 What’s the best bet this weekend?