During the NFL season, Stadium sports betting analyst Nate Jacobson will break down every single point spread using lines as of Thursday morning. Here are his thoughts on the Week 10 slate.

Browns (+2.5) over Patriots: Last week, I made a case for the Browns in the teaser section against the Bengals, but ended up using Cleveland in all of my contests at +2.5 — and they won by 25. They are back on the road and opened at the same point spread as they did in Cincinnati. Cleveland took the early money all the way to +1, but then it ticked back up to +2.5 after RB Nick Chubb tested positive for COVID-19. Chubb is vaccinated, so there is a chance he plays, but the Browns do have a serviceable running back in D’Ernest Johnson, who made a name for himself against the Broncos last month.

The Browns are the better team and can get after rookie QB Mac Jones. At an underdog price, I like the Browns against the spread and would use them as a teaser at the current point spread. I just want to make sure they don’t have lingering COVID-19 issues before playing the bet.

Lions (+8) over Steelers: Last week, I backed an ugly underdog with the Bears +7 against the Steelers on Monday night. I’m going to take the same approach this week with the Steelers now being an even bigger favorite against the Lions. Detroit is still seeking their first win of the season and comes into this game with a huge rest advantage off a bye week.

We’ve seen the Lions underachieve in games with tight lines, but play their best football in games involving large point spreads — like in those matchups against the Ravens, Vikings and Rams. I really want to fade the 5-3 Steelers, so I’ll take a shot at the winless Lions to keep it within the number.

Eagles (+3) over Broncos: There’s a lot of recency bias in this number, which was Broncos -1.5 on the look-ahead. Denver is coming off a convincing win in a huge underdog role at Dallas last week, while the Eagles lost a close game to the Chargers at home.

Even though the Broncos played their best game of the season after star pass-rusher Von Miller was traded, I don’t believe the line move is justified. We know everything in the NFL is week-to-week, and I can see the Broncos having a letdown performance against an Eagles team that has received a lot of betting support this season.

Sides I Plan to Use in a Six-Point Teaser

Ravens (-7.5) over Dolphins: I’ll be involved with the Thursday night game this week with Baltimore teaser legs brought down to -1.5. I’m hesitant about teasing a road favorite down to basically win the game, but I really like Baltimore’s chances to win, especially with Dolphins QB Jacoby Brissett probably playing in place of the banged-up Tua Tagovailoa.

Cowboys (-8) over Falcons: Both teams had very different results last week. The Cowboys fell behind 30-0 to the Broncos before losing 30-16 as 10-point home favorites, while the Falcons went on the road and upset the Saints as 6.5-point underdogs. Now the ‘Boys are a smaller home favorite against a Falcons team that isn’t better than the Broncos. The Falcons had a similar number in their game against the Saints, and Dak Prescott’s Cowboys are far better than Trevor Siemian and New Orleans.

Based on that math and logic, there’s some line value in the Cowboys, and I expect them to have a bounce-back performance offensively. The total in this game was bet up from 52 to 55, so there is an expectation of points in this game. My preferred way to back the Cowboys is to tease them down to under a field goal.

Saints (+2.5) over Titans: I’ve often been a critic of Titans head coach Mike Vrabel because of his disappointing defense and underwhelming in-game decisions. But I have to give him a lot of credit for the run Tennessee is on with consecutive wins as an underdog against the Bills, Chiefs, Colts and Rams.

Now the Derrick Henry-less Titans are 7-2 and find themselves as a favorite for the first time since a Week 5 trip to Jacksonville. It’s a completely different role, and I worry about the Titans’ offense in the matchup against a stout Saints unit. Tennessee’s offense only had 3.5 yards per play last week, with their defense forcing turnovers to help them out. This could be a game where the loss of Henry hurts a little more because of how important he is to the offense.

The Saints were upset last week at home by the Falcons a week after pulling off an upset against the Buccaneers. New Orleans has struggled this season as the favorite, going 1-4 against the spread in that role with three outright losses. However, they are a perfect 3-0 straight-up as underdogs this year. I would bet the Saints at +3 if the number returns, but for now I’ll just tease New Orleans.

Jaguars at Colts (-10): I considered the Colts here at first, but worry about them allowing a late backdoor cover. As a double-digit favorite, the Colts led the Jets 42-10 midway through the third quarter last week but ended up playing conservatively to allow the Jets to almost cover the point spread. I’m afraid of Jacksonville covering late when the game is out of reach.

Bills (-11) at Jets: You can’t cover 16-point closing spreads when you only score six points, and that’s what the Bills did in a shocking road loss to the Jaguars. Now they have a second-straight road game against a team equally as bad in the Jets.

At the current number, you can make an argument for Buffalo to bounce back. However, I’m worried about how the Bills played two weeks ago against the Dolphins when they needed a late touchdown in another game as a big favorite.

Buccaneers (-9.5) at Washington: This is a rematch of last season’s NFC Wild Card game, and it will have the same quarterback battle. The Buccaneers were a 10-point favorite at Washington that night in a game without fans, so the point spread is similar to what we saw last season.

However, the total in the playoff game was 44.5, while the current total for this game is at 51.5. That just shows how disappointing Washington’s defense has been this season after carrying them to an NFC East title 10 months ago.

Vikings at Chargers (-3): Despite Minnesota’s 3-5 record, all of their losses have been by seven points or less. That means they’re a few plays away from being firmly in the NFC North race. I’d like to take them at +3 against an inconsistent Chargers team, but I’m going to stay off this game for now because of a few injury situations the Vikings are facing after a demoralizing loss against the Ravens.

Panthers at Cardinals (-10.5): There are quarterback questions in this game with both starters injured. Sam Darnold was placed on injured reserve this week with a shoulder injury, so P.J. Walker will get the start in this game. Walker is inexperienced, but I don’t think he can be much worse than how Darnold has played recently.

Cardinals QB Kyler Murray is still day to day with an ankle injury. The current line implies that Murray will return after a one-game absence, although Colt McCoy filled in admirably in a win over the 49ers. If Murray ends up playing, I would guess he’s still not 100 percent, so I could see myself taking a big number with the Panthers as underdogs.

Seahawks at Packers (-3.5): QB Russell Wilson is cleared to play after missing the last three games for Seattle. The Seahawks are 3-5 and coming off a bye week, but there’s a path to make the postseason through a Wild Card spot.

After testing positive for COVID-19 last week, the Packers hope to have Aaron Rodgers for this game. Rodgers missed the game last week against the Chiefs and isn’t eligible to rejoin the team until Saturday. If there’s a quarterback that doesn’t need practice to play well, it would be Rodgers against an underwhelming Seahawks defense. If this line got down to -3 and Rodgers was able to play, I would look toward backing Green Bay.

Chiefs (-2.5) at Raiders: The Raiders just lost to the Giants, but had a 6.0-4.5 edge in yards per play, as Derek Carr’s interception was returned for a touchdown that swung the game. As for the Chiefs, they were able to hold off the Packers, but couldn’t score a touchdown after the opening drive. This feels like a good spot to back the Raiders coming off an unlucky loss while fading the Chiefs after a lackluster win.

There’s a chance I stay away because I don’t think the Raiders are as good as their record suggests. I’m also counting on the Chiefs to break out eventually, and I can see it happening in this game with plenty of Kansas City fans in attendance for this Sunday night affair in Las Vegas.

Rams (-3.5) at 49ers: Last week, I said to bet the Vikings at +6 against the Ravens, but I would personally take the game off after they had just let me down. This is a similar spot for me with the 49ers, where I have line value on them over a field goal, but they disappointed me so much last week that I’m going to stay away. This is Monday Night Football, so late information could eventually sway my opinion. 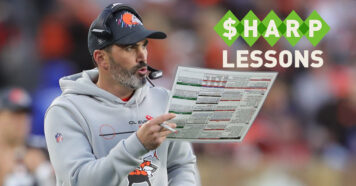 Who covers this week? 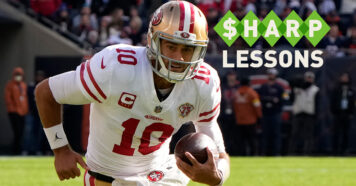 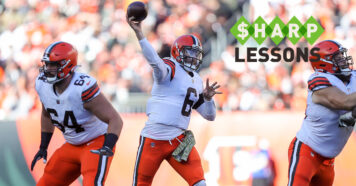 Best bets for this weekend.