During the NFL season, Stadium sports betting analyst Nate Jacobson will break down every single point spread using lines as of Thursday morning. Here are his thoughts on the Week 17 slate.

Note: Nate will discuss all of his college football and NFL bets on the Sharp Lessons podcast that drops every Wednesday and Friday. Subscribe on Spotify and Apple for episodes and follow Stadium Bets on Twitter for more sports betting content.

Cardinals (+6) over Cowboys: I don’t love the idea of betting on the Cardinals, but the number is intriguing. The look-ahead line before Week 16 was Cowboys -2.5 and the line re-opened Cowboys -3 on Sunday evening before Dallas’ Sunday night game against Washington. After the Cowboys’ dominant 56-14 win in front of a national audience, the line expectedly went up. This could be both a buy low spot on the Cardinals and a little bit of a sell high on the Cowboys coming off their most recent result.

My worry with betting the Cardinals is the trend of Kliff Kingsbury teams fading as the season goes on. In the last three seasons, Arizona is 15-5-1 through their first seven games. They are 8-18 after Week 7, including 3-5 this season after starting with a 7-0 record. But the Cardinals have played their best football on the road this season, so maybe they’ll be able to get back on track as the underdog.

Panthers (+6.5) over Saints: One of my strategies this season has been betting against the Saints when they are a favorite. I haven’t trusted their offense — no matter who has played quarterback — and now they are going through a COVID-19 outbreak that greatly impacted them in their last game against the Dolphins on Monday night.

The Panthers named Sam Darnold as their starting quarterback, which has to be at least a small upgrade over Cam Newton. Regardless of who starts this game for the Panthers, I would consider them as this big of an underdog in a game with a total of 37.5.

Washington (+3.5) over Eagles: Washington was on the opposite side of the the Cowboys’ impressive win on Sunday night, and I’m expecting a bounce back from Ron Rivera’s team. It was a tough spot for Washington because they played the Eagles the Tuesday before due to COVID-19 issues. Washington should be healthier for this game, and they have familiarity with their rival.

This bet would also be a fade of the Eagles as a road favorite. Philly took awhile to get going in their last two games which were against a Washington team that had Garrett Gilbert starting and the Giants, who were led by Jake Fromm.

Raiders at Colts (-7): This is a game I want no part of because of the uncertainty surrounding who will be able to play due to the latest COVID-19 protocols in the NFL (although the current point spread indicates that QB Carson Wentz will start). If he can’t play, I would guess the line dips under a field goal with Sam Ehlinger under center for Indy.

Giants at Bears (-5.5): I’m tempted to bet the Giants here. The Bears are not a good enough team to be this big of a favorite against any team in the league. However, I don’t want to put money on this version of the Giants, especially if Jake Fromm gets another start.

Buccaneers (-12.5) at Jets: I usually look at the home underdog in a situation where a road team is favored by double digits. But since we have a team that is motivated to improve their playoff seeding battling another team who has nothing to play for, I will likely pass.

Falcons at Bills (-14): This number is a tad high, but makes sense considering that Buffalo has made a habit of being bullies this season and winning by margin. Their first eight wins of the season came by 15 or more points, and they got their ninth victory last week in New England by 12 points in a closely lined game. I’m going to stay away.

Chiefs (-5) at Bengals: I had some interest in the Chiefs early this week, but don’t think I’ll be able to bet it unless the number moves. Both teams are coming off blowout wins, but I was hoping the Bengals would’ve taken early money after a destruction of the Ravens in Week 16. It was a big win for the franchise, but they also faced QB Josh Johnson and a decimated Baltimore secondary.

The Chiefs dominated the Steelers without Travis Kelce, and Kansas City’s tight end could be in line for a big game against a Cincinnati defense that has trouble covering the middle of the field. I like the matchup for the Chiefs, but actually think the line value is on the Bengals. Unless this line gets down to Chiefs -3.5, I’ll stay away from betting on this.

Jaguars at Patriots (-16): The Jaguars are another team that interests me. This is a big number for the Patriots’ offense to cover in a game with a total of 41.5. But then I remembered Bill Belichick is excellent against rookie quarterbacks — and the Jaguars have a struggling one in Trevor Lawrence. I was hoping to take the Jaguars in their first game as big underdogs since Urban Meyer got fired, but I’m wary now because it’ll be tough for Jacksonville to score.

Dolphins at Titans (-3.5): I’m torn on this game because I would like to fade both teams. The Dolphins are on a seven-game win streak and they are currently the No. 7 seed in the AFC playoff picture. But the quarterbacks that they’ve faced in this run features a number of below average players and Lamar Jackson on a short week.

The Titans are coming off an upset win over the 49ers last Thursday and did get a key piece to their offense back with WR A.J. Brown returning to the lineup. I still don’t love the idea of betting on the Titans as favorites without RB Derrick Henry, and the Dolphins do have two talented cornerbacks that can focus on containing Brown.

Broncos at Chargers (-6.5): The Chargers are coming off one of the worst results of the season when they lost at the Texans last week. Despite being ravaged by COVID-19, the Chargers went up from a 10.5-point favorite to as high as a 13.5-point favorite the day of the game. Maybe they get some players back and rebound against a Broncos team that just lost two crucial games. But I don’t trust LA as a favorite at home because of their inconsistency and lack of home-field advantage.

Texans at 49ers (-12): The 49ers were favored by 15 early in the week. Then news came out that Jimmy Garoppolo suffered a thumb injury against the Titans and the line dropped. I would assume rookie Trey Lance gets the start because they should still be able to beat the Texans while giving Garoppolo extra time to rest. But if Lance starts, I wouldn’t have interest in betting San Francisco giving double digits.

Lions at Seahawks (-7): Neither team will make the postseason, but the Lions have been a point-spread darling since their bye week, as they’ve covered six of their last seven games. Detroit is motivated to finish out the season strong, so I would lean toward them in this game. However, I will likely stay away because this line was Lions +9 earlier in the week, meaning a lot of value is extracted from the current point spread.

Rams (-4) at Ravens: It’s hard to properly rate the Ravens because of injuries all over their roster. The defense is a mess, but more importantly I don’t know how to judge their quarterbacks. Lamar Jackson has missed the last two games with an ankle injury, and I’m not sure how effective he’ll be if he comes back this week. Tyler Huntley looks like a serviceable backup for Baltimore, but he missed last week with COVID-19. I’m intrigued to see where this line goes once we know who starts for the Ravens.

Vikings at Packers (-6.5): It’s been a mild winter around the midwest, but expect cold conditions at Lambeau Field on Sunday night with temperatures around zero degrees at kickoff. This could suit the kind of game the Vikings want to play with RB Dalvin Cook against a Packers defense that just let the Browns run all over them on Christmas Day.

Last season, the 1-5 Vikings went into Green Bay and beat the Packers 28-22 because Cook ran wild, allowing Kirk Cousins to be a game manager. If the Vikings can keep Aaron Rodgers on the sideline, then they’ll have a chance to cover the number. I’m curious to see if this line gets to +7, which might be enough to make me bet on a Minnesota team that only plays close games.

Browns (-3.5) at Steelers: The Steelers were a short favorite on the look-ahead line, so there’s been a significant adjustment. The Browns did lose to the Packers, but they were in a tough spot due to COVID-19, and they’ll be close to full strength this week. I would’ve loved to bet on the Browns if this line was closer to a pick’em, but I can’t take them at this number. 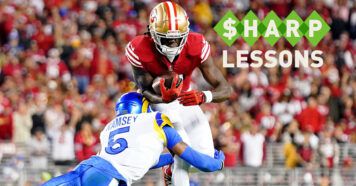 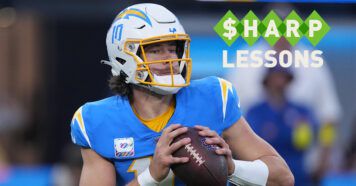