This is how polling in the OVC shook out among coaches who voted, with one being the best and 12 being the worst: 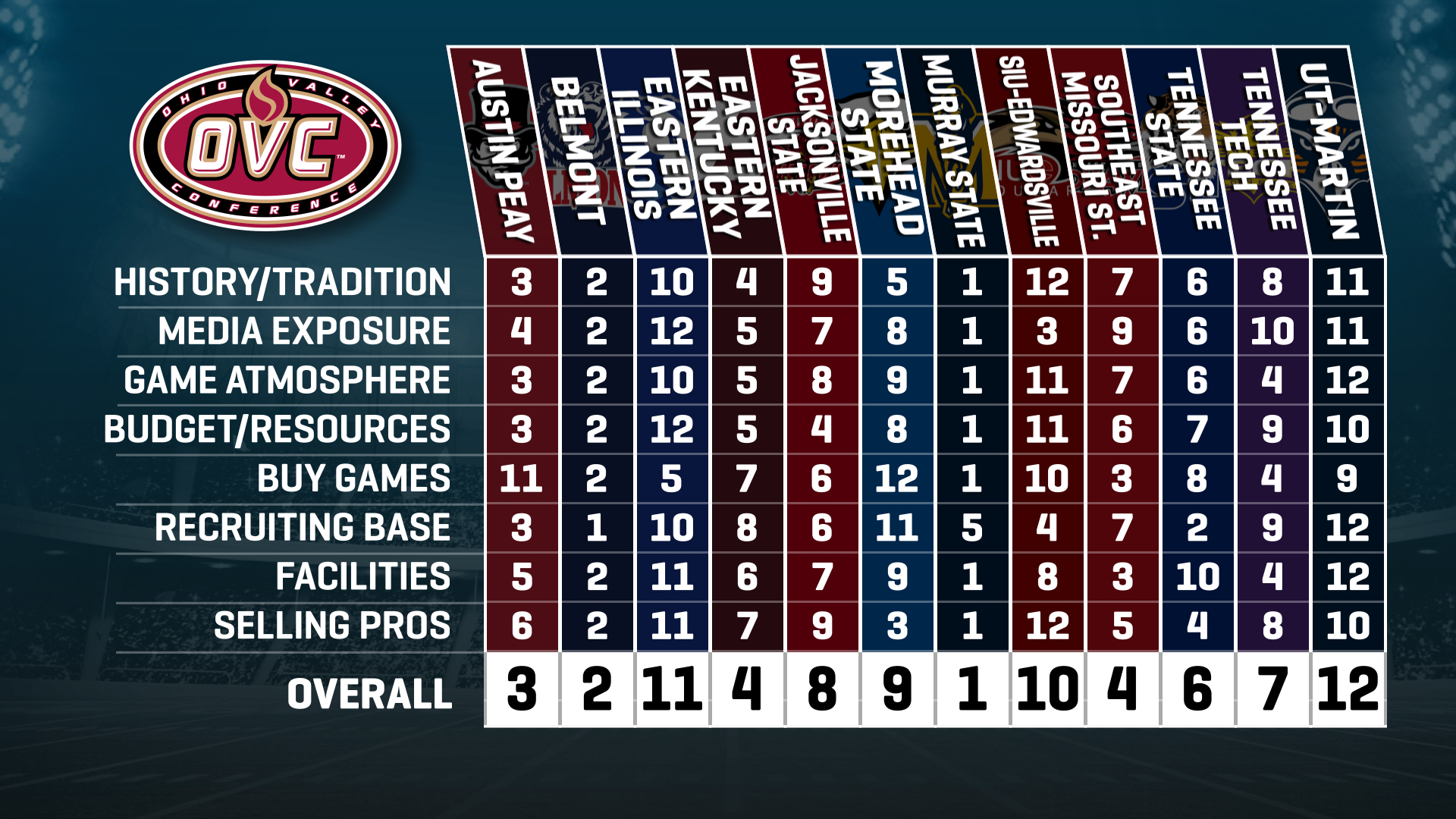 1. MURRAY STATE (92) – The Racers have been to the NCAA tourney 16 times and the last eight head coaches have gone to the tournament at least once. Murray ranks first in seven of the eight categories – with recruiting base being the lone category in which it doesn’t sit at the top.

Where they win: “Tradition of league titles and NCAA tournament appearances, passionate fan base, facilities are off the charts and NBA players with Ja Morant, Isaiah Canaan and Cam Payne. They don’t care about football and that helps the basketball program.” – OVC head coach

The knock: “You’re in Murray, Kentucky. There’s nothing there. Nothing except an Applebee’s and a movie theater.” – OVC assistant

2. BELMONT (89) – Recently retired coach Rick Byrd had been at the helm since 1986 and took the Bruins from the NAIA ranks. They joined the A-Sun in 2001, and then the OVC in 2012. Belmont has gone to three NCAA Tournaments and three NITs in its seven years in the OVC. It ranks second in the league in seven of the eight categories, and first in the other one (recruiting base).

Where they win: “Great home arena, the campus is unbelievable. It’s the best campus in the OVC. Most campuses are off a bypass somewhere, but Belmont’s is right near the city of Nashville, so you have the campus and also the city. They can sell success, high-character players and also Ian Clark in the NBA and Dylan Windler may be headed there.” – OVC assistant

The knock: “There’s really not much. Maybe the style of play, that they haven’t really gotten athletes. They have recruited a different type of kid.” – OVC head coach

3. AUSTIN PEAY (66) – The Govs have been to the NCAA tourney seven times, including four under Dave Loos, who was the head coach from 1990 until 2017. Austin Peay checks in third in the league in history, TV exposure, game atmosphere and budget.

Where they win: “They love basketball and have a history of winning. They draw well and are 45 minutes from Nashville.” – OVC assistant

The knock: “They are still stuck in the 90s, and think they should be the top team in the OVC even though they haven’t taken the steps and committed the resources to stay competitive with Murray or Belmont.” – OVC assistant

T4. SOUTHEAST MISSOURI STATE (57) – There is a lone NCAA tourney – in 2000 under Gary Garner – since joining the OVC in 1991. The Redhawks are towards the middle in most categories, but do boast better facilities than most programs in the league and also figure higher than most in buy games.

Where they win: “The town is bigger and probably nicer than most of the other ones in the league. They have one of the best arenas in the conference, and you can get to St. Louis and Memphis quickly, and also can recruit a lot of junior colleges nearby.” – OVC assistant coach

The knock: “Every coach since they went D-1 has gotten fired because of losing or cheating. I just don’t know how much they really care about the program anymore.” – OVC head coach

T4. EASTERN KENTUCKY (57) – The Colonels have been to the NCAA tourney eight times, but just three since 1980. Two came with Jeff Neubauer at the helm, and one with Travis Ford in 2005. EKU ranks between fourth and eighth in every single category.

Where they win: “The location is good, it’s just outside of Lexington, and they have done a bunch of upgrades on-campus. They also have great fan support because that’s what fans in Kentucky do: watch basketball.” – OVC head coach

The knock: “The budget isn’t competitive with the top teams in the league, and neither are the salaries. They don’t even have a DOBO. The focus is on football – that’s the biggest show in town. They put a lot of resources into football.” – OVC assistant

6. TENNESSEE STATE (55) – The Tigers had plenty of success in NAIA, winning three national titles. They also went to the NCAA tourney in 1993 and ’94 under Frankie Allen, but haven’t been since. They rank second in recruiting base, but towards the bottom in facilities.

Where they win: “Nashville. It’s obviously a great city and they can sell the city big-time. The program also has pretty good history, especially dating back to when they were in the NAIA.” – OVC head coach

The knock: “It’s tough to get any attention in Nashville with all the pro sports and also with Belmont having so much success. The arena has a blue track around it – like a foam track. It needs to go. They need to get rid of that thing.” – OVC assistant

7. TENNESSEE TECH (49) – It’s been a while since the Eagles went dancing. In fact, it came all the way back in 1963 under John Oldham. There are just two NCAA tourney appearances in program history, with the other also coming under Odham in 1958. John Pelphrey takes over a program that has good facilities and a great game-day atmosphere, but not much history and not enough financial support.

Where they win: “The arena is beautiful, one of the top two or three in the league. Glass offices overlooking the court. It’s big-time. They also have a great strength facility. They are three hours from Atlanta, an hour from Nashville, close to Knoxville and Chattanooga.” – OVC assistant

The knock: “There’s nothing to do in Cookeville. It’s very, very desolate. It makes it hard for student-athlete retention.” – OVC head coach

8. JACKSONVILLE STATE (48) – Ray Harper took the Gamecocks to their lone NCAA tourney appearance in 2017. The program ranks towards the top of the league in budget, but lacks in history.

The knock: “It’s 100 percent all about football. It’s a football state, and it’s the dominant OVC football program.” – OVC assistant

9. MOREHEAD STATE (38) – The Eagles have tradition, going to the NCAA Tournament seven times. However, there was a barren stretch from 1985 until Donnie Tyndall took over in 2009. They rank dead last in buy games and 11th in recruiting base, but the history helps, as does having Kenneth Faried in the NBA.

Where they win: “Close to Cincinnati, Louisville and Indianapolis. It’s a small town in a basketball state and they don’t have football, so hoops is the priority. The arena is nice, but it’s too big.” – OVC head coach

The knock: “Budget – overall, and also the recruiting budget. Even though you are somewhat close to major cities, it’s a tough place to recruit from. It’s Morehead, Kentucky. Not a lot around there.” – OVC assistant coach

10. SIU-EDWARDSVILLE (33) – The Cougars joined the OVC about a decade ago and are already on their third head coach. The TV exposure is second in the league due to deal with Fox Sports Midwest, and recruiting base is strong, but every other category ranks in the bottom third of the conference.

Where they win: “They have the benefit of a campus, but are also close enough to the city, which is different than the rest of the league besides Belmont. They also have the benefit of the Fox Sports Midwest deal, and have a good gym and facilities.” – OVC assistant

The knock: “Zero tradition of winning, and not enough support. Academics are all tougher than most of the schools in the league, so they can’t get just anyone in.” – OVC assistant

11. EASTERN ILLINOIS (23) – Rick Samuels took the Panthers to the NCAA tourney in 1992 and 2001. EIU went into the OVC in 1996, and has been in the middle of the league in most years. The lone category in which the program checks in the top half of the league is buy games; EIU ranks dead last in TV exposure and budget.

Where they win: “It’s centrally located – a couple hours from Chicago, Indy and St. Louis, so there are plenty of good players in the vicinity. It’s a college town. And Tony Romo. They can sell Tony Romo.” – OVC head coach

The knock: “The arena is behind the times. It’s bad.” – OVC assistant

12. UT MARTIN (17) – The Skyhawks have been in the OVC since 1992 and have yet to get to the NCAA tourney. Cal Luther, Bret Campbell, Jason James, Heath Schroyer and now Anthony Stewart have tried. The program ranks last in atmosphere, facilities and recruiting base.

Where they win: “I’m not really sure. It’s the toughest job in the league. Maybe Lester Hudson?” – OVC assistant

The knock: “The arena looks like a military bunker. It takes 10 minutes to get from the locker room to the gym, and it’s dark and dreary.” – OVC head coach