Late Saturday night, Edwards became the first player since Curry to win Most Outstanding Player honors in a region despite playing for a team that didn’t advance to the Final Four.

It’s no consolation for Edwards and his Boilermaker teammates, who were the victims of the first buzzer beater of the 2019 NCAA Tournament that led to an 80-75 overtime loss to No. 1 seed Virginia.

But Edwards’ March heroics in the last two weeks cemented him as one of classic figures in this tournament, this sport and this month.

[RELATED: Bruce Pearl Has Auburn One Win Away From Final Four]

He needed just four games to become the all-time leader in 3-pointers made in a single NCAA Tournament with 28 threes, surpassing Michigan’s Glen Rice’s mark of 27 3-pointers in six games in 1989.

Edwards is the only player in the history of the tournament with nine or more 3-pointers in multiple NCAA Tournament games. He made nine against Villanova in the second round, then one-upped that performance with 10 against Virginia, finishing both games with 42 points.

The latter gave him 139 points for the NCAA Tournament – the most points through four games in the NCAA Tournament since Loyola Marymount’s Bo Kimble scored 143 in 1990 and it’s just 15 points shy of cracking the top 10 point totals for a single tournament. ESPN analyst and former Duke star Jay Williams sits in 10th place with 154 points during the Blue Devils’ 2001 national championship run.

If Purdue would have won on Saturday, which appeared as a near certainty with about 2.5 seconds to play, Edwards would’ve had a great chance of finishing in the top five all-time, even if the Boilermakers didn’t make the national title game. 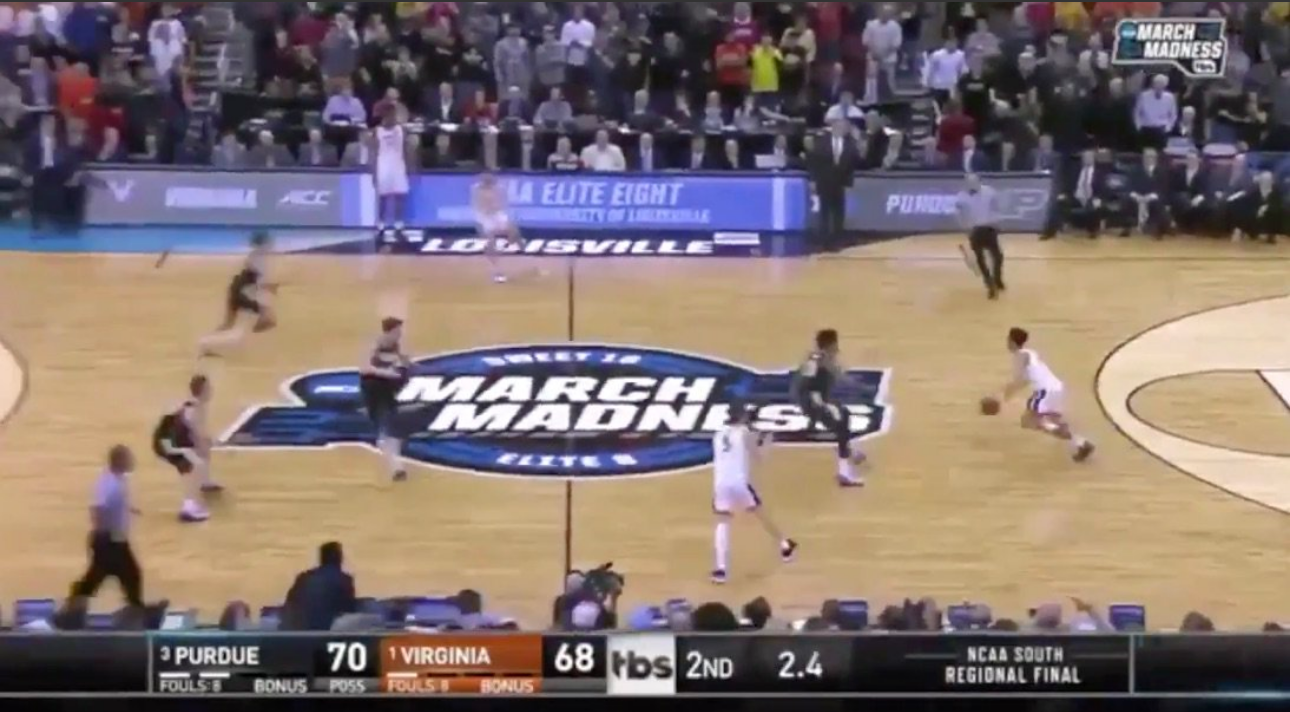 Purdue was this close to Edwards having the opportunity to do his own impression of Kemba Walker or Shabazz Napier, the former UConn lead guards who engineered unlikely national championship runs in 2011 and 2014, respectively, while shouldering an incredible load offensively.

Except, amazingly, that description might be a disservice to just how important Edwards was to Purdue. His shot rate (the percent of his team’s shots that he took while he was on the floor) this season was 37.5 percent – higher than Walker’s (32.9%) and Napier’s (26.3%).

The junior’s 42 points against Virginia were nine more than the rest of his teammates combined (33). He scored 43 percent of Purdue’s 322 points in the NCAA Tournament.

But an all-time March Madness moment prevented Edwards from putting his name alongside Walker, Napier and other national title winners.

After Virginia’s Ty Jerome missed the second of two free throws, his teammate Mamadi Diakite tipped the ball back out, sending it flying to almost the opposite 3-point line. The Cavaliers’ speedy third guard Kihei Clark tracked it down, had the situational awareness of how much time was on the clock and where the other nine players were on the court, and fired a pass back to Diakite, who tossed up a mid-range jumper at the buzzer.

Perhaps the highest praise of Edwards’ Elite Eight showing isn’t a stat but a coaching decision.

Virginia Coach Tony Bennett, whose teams have ranked in the top seven nationally in defensive efficiency in each of the last six seasons, pulled ACC Defensive Player of the Year De’Andre Hunter, a First Team All-ACC selection who will likely be a lottery pick in the 2019 NBA Draft, in the game’s final minutes.

Edwards scored 16 points on 6-of-10 shooting against the 6-7 Hunter and all of those points came in the second half, according to ESPN Stats & Info. Purdue’s dynamo shooting guard was so good that he played arguably the best defender in the country off the floor.

Instead, Bennett went with the speedy, 5-9 Clark guarding Edwards on the final possessions of regulation.

It’s a shame that what was potentially – if not likely – the final offensive possession of Edwards’ college career was a turnover, when he fired a pass down the floor to teammate Ryan Cline with just over a second left in overtime and Purdue trailing 78-75. The pass was out of reach of Cline, who got a hand on the ball before it deflected out of bounds, all but sealing Virginia’s win.

“We were expecting them to foul so we had a screen in for Ryan and I was trying to kick it ahead before he fouled me and it was a tough catch,” Edwards told reporters after the game, when asked about the play. “It was a tough catch for Ryan. You know, just how it happens. The game of basketball and the game’s moving quick.”

One thing is for certain. The game of basketball is better because Carsen Edwards is a part of it and his play this month should cement his legacy as having produced one of the greatest individual runs in the history of the NCAA Tournament.