Ranking Every State in the U.S. by the College Basketball Prospects It Produces

That must be an indication that the Palmetto State is a hotbed of basketball talent, right?

So which states really are the most common producers of college basketball talent? 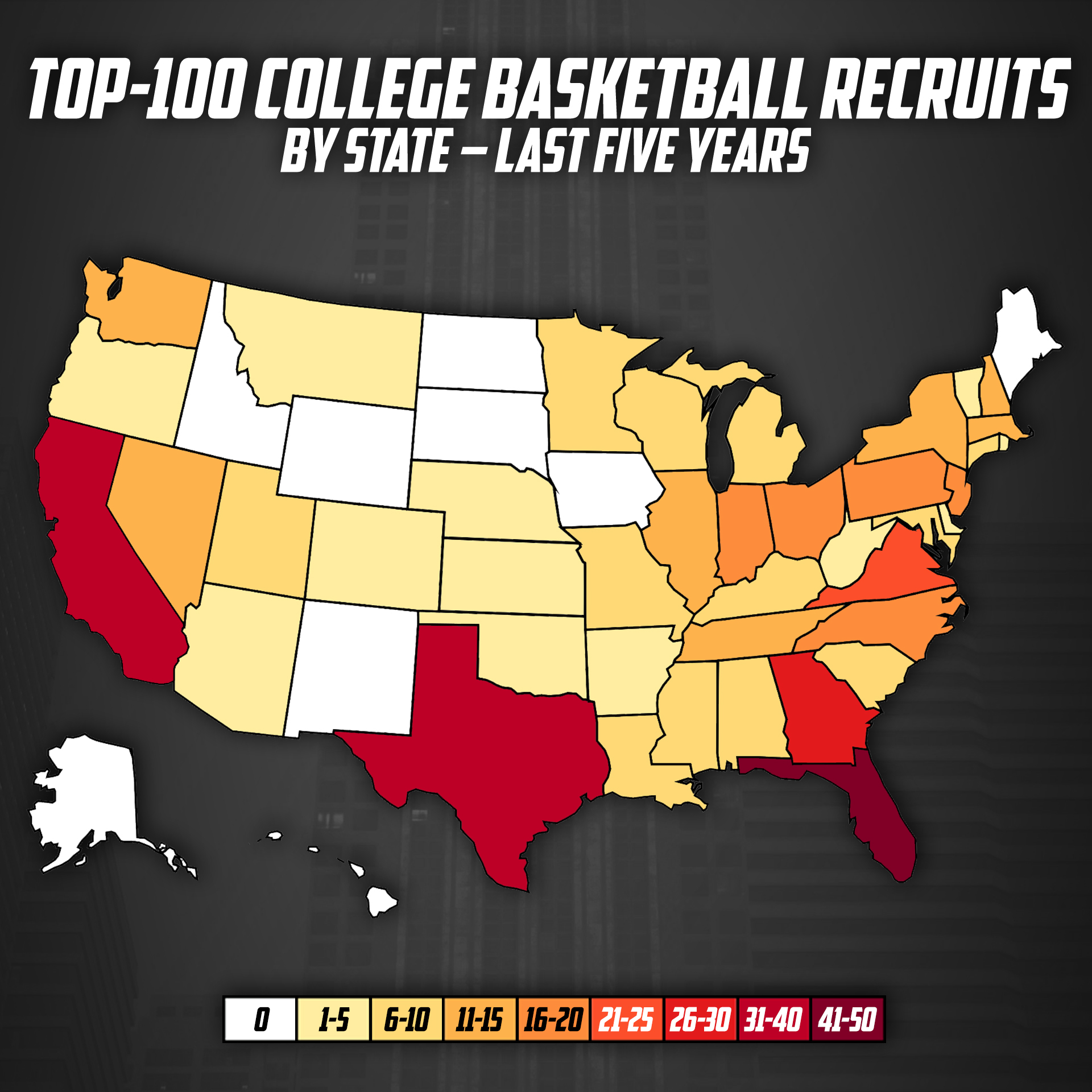 In an effort to quantify which states produce the most – and best – high school basketball prospects, and which schools capitalize on the most fertile recruiting ground, we went through the last five recruiting classes and analyzed the nationally ranked prospects from every state (plus the District of Columbia) according to the 247Sports Composite rankings.

Below is a complete breakdown of all 50 states, plus D.C., in descending order of which states have produced the best Division I-bound high school basketball talent in the last half decade.

The states are listed in descending order of the number of top-100 recruits they’ve produced in the last five years.

The last column, “Top Recruiting School,” lists the school (not necessarily located in the respective state) that has signed the highest number of the state’s top-10 prospects over the last five recruiting cycles — a way to measure which schools have successfully recruited a state in terms of both the quantity and quality of recruits.

The composition of schools that recruit in a particular state varies considerably both in number and stature. For example, in the state of California, UCLA landed 11 of the state’s top-10 recruits over the last five years. Major programs like USC, Arizona and Duke have also heavily recruited in California.

However, in a state like Maryland, 37 different schools have landed one of the state’s top-10 players during the last five seasons.

The following table shows the states that have produced between 10 and 55 nationally ranked recruits over the last five recruiting cycles, meaning there are typically between three and 10 prospects from that state on an annual basis.

The states are listed in descending order of the number of top-100 recruits they’ve produced.

The third and final table below shows the states that have produced fewer than 10 nationally ranked high school prospects over the last five recruiting classes, according to the 247Sports Composite rankings.

The states are listed in descending order of the number of nationally ranked recruits that they’ve had combined across the last five recruiting cycles.

[RELATED: An Inside Look at Kentucky’s Financial and Travel Investment Into Recruiting]

Now that we’ve established which states produce the most and the best college basketball prospects in the country, which schools have done the best at landing the top players in the most talent-rich states?

Here’s a closer look at the schools that have most often won high-profile recruiting battles in Florida, California and Texas. In our analysis, we examined the top-10 recruits from those aforementioned states from each of the last five years.

The University of Florida has landed a national-best six players from the state of Florida who ranked among the state’s top-10 prospects in one of the last five recruiting classes. As shown in the first table above, Florida is the most talent-rich state in the country with anywhere from eight to 14 top-100 recruits annually and often one or two players who rank in the top 10 of their recruiting class.

For a large state with that many DI college basketball programs, it’s impossible for one school to “lock down its borders” and have a monopoly on every elite recruit in the state, but the Gators have done well at recruiting Floridians.

From the 2015 recruiting class to the present, Florida has signed these top-10, in-state prospects:

In total, 28 different programs have landed at least one of the state’s top-10 recruits in the last five recruiting classes. LSU is second behind Florida with four commits from the Sunshine State, while Florida State, Duke and North Carolina have enrolled three apiece.

Crosstown rivals UCLA and USC have done the best job at recruiting the state of California during the last five recruiting classes as the Bruins have signed 11 of the state’s top-10, in-state prospects since the 2015 recruiting class, while the Trojans have landed seven.

Here’s an in-depth look at UCLA and USC’s recruiting hauls of prospects who ranked among the top 10 in the state:

Similarly to the state of Florida, the top-recruiting school in Texas is the one that shares the state’s name.

The University of Texas has signed nine top-10, in-state prospects over the last five recruiting cycles.

Texas A&M is second with six, then TCU and Kentucky are tied for third with four apiece.

Take a look at the top-10, in-state recruits that Texas has signed from the 2015 class to present: