In 2015, UCF’s once-promising football program had hit rock bottom. In the midst of an 0-12 season, long-time coach George O’Leary stepped down.

Newly-hired athletic director Danny White was faced with his first major hire with the Knights, and did he deliver. White hired then-Oregon offensive coordinator Scott Frost, who went 6-7 in his first season and then 13-0 in UCF’s magical 2017 season.

Considering White’s hirings at UCF, and also some very solid personnel decisions at Buffalo, White is Stadium’s choice for the best current non-Power Five athletic director based on his career football and men’s basketball hires.

White said he was drawn to Frost because UCF was “innovative, young and modern. We wanted to play an up-tempo brand of football, which is becoming more and more prevalent, but four or five years ago, it wasn’t as much in the state of Florida.

“We developed a candidate pool focused on bringing that style and speed of football to Florida.”

After Frost left for the Cornhuskers, it was clear that UCF now fielded the dominant roster that White originally envisioned. The UCF AD then had to find a new coach who’d be able to build off the momentum.

“This was a more difficult hire to make, because we weren’t [coming off] 0-12,” White said. “That whole team [that went 13-0] was returning. That was a major sense of responsibility to that roster to make a good hire that was a good fit. We connected well with Josh. He does it the right way. The foundation of the offense was very similar, and he was a good fit to where we were and [shared] the long-term vision of where we want to be as a program.”

As strong as White’s football hires were at UCF — he also made a solid acquisition in basketball coach Johnny Dawkins — his basketball hires of Bobby Hurley and Nate Oats in his first job at Buffalo were just as impressive.

“We needed an identity in Buffalo. With professional hockey and football, we weren’t really relevant,” White said. “I was shocked how irrelevant we were. We needed to do something.”

And that was hire Hurley, a high-energy — some suggest volatile — Rhode Island assistant coach.

Hurley energized the program. He had 42 victories in two seasons, then the most wins in back-to-back years in program history.

After he left, Oats took over, recording a school-record 32-4 season in 2019. White also made a quality football addition at Buffalo with Lance Leipold, who won six Division III national titles in eight years at Wisconsin-Whitewater. 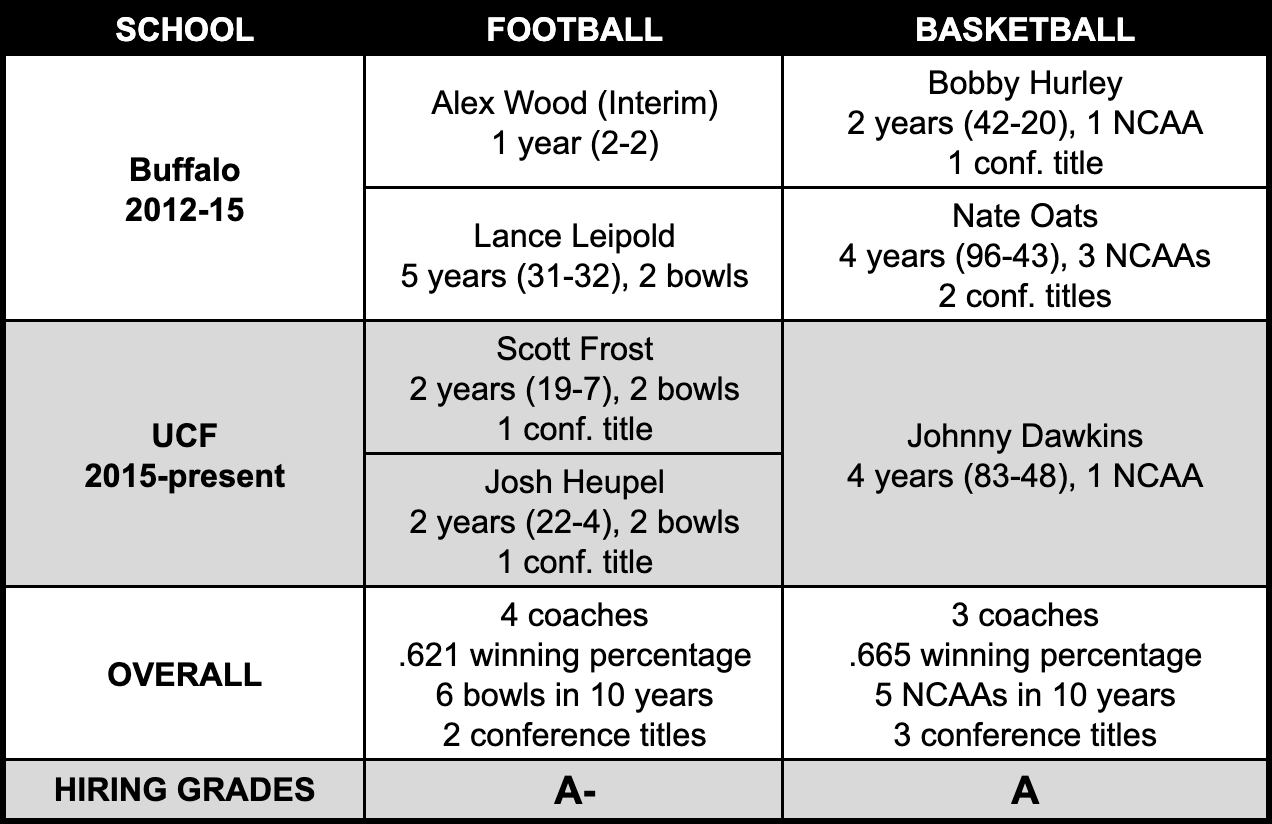 Analysis: Danny White’s first AD job was at Buffalo and he started off strong by hiring basketball coaches Bobby Hurley and Nate Oats, and football coach Lance Leipold. Hurley and Oats combined for four NCAA Tournament berths, which were the first in program history. At UCF, White hired Oregon offensive coordinator Scott Frost to take over an 0-12 program, and two years later, UCF was 13-0, finishing ranked No. 6 in the AP Poll. When Frost left for Nebraska, White hired Missouri OC Josh Heupel, who debuted with a 12-0 regular season and New Year’s Six bowl. On the basketball side, Johnny Dawkins guided UCF to its first NCAA Tournament in 14 seasons. 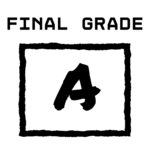 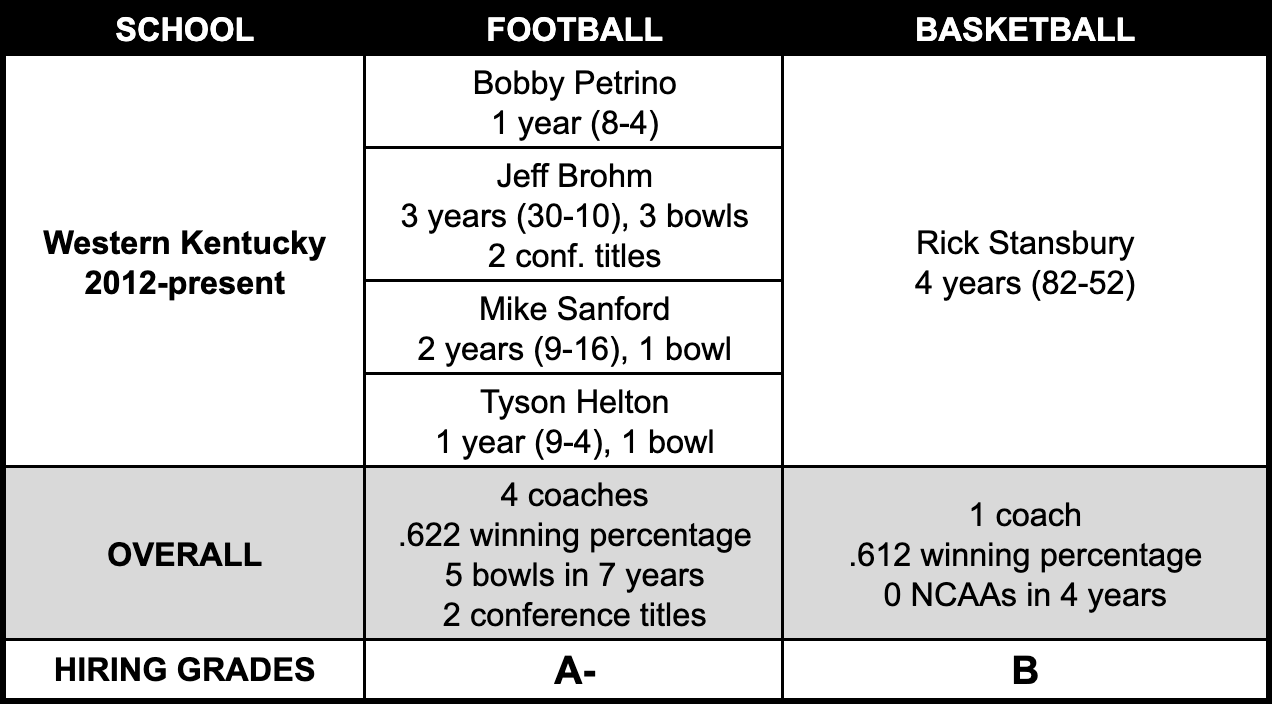 Analysis: Todd Stewart had been at Western Kentucky since 2008 and became athletic director in 2012. When Willie Taggart left for USF, Stewart took a chance in 2013 on Bobby Petrino, who was fired at Arkansas in 2012. Petrino went 8-4 before returning to Louisville. Stewart promoted WKU offensive coordinator Jeff Brohm, who delivered three bowls, 30 wins, two Conference USA titles and the school’s first AP Poll ranking in school history. The program dipped with Mike Sanford, but Tyson Helton quickly turned it around, going 9-4 last season. Basketball coach Rick Stansbury has been solid and frustratingly close to the Big Dance, losing the C-USA title game the past two seasons.

Analysis: John Hartwell’s first athletic director job was at Troy, where his best hire was football coach Neal Brown, who inherited a program with four consecutive non-winning records. Brown turned the program around, recording three consecutive double-digit win seasons for the first time in school history, including upsets at LSU (in 2017) and at Nebraska (in 2018). Hartwell then went to Utah State, where he landed basketball coach Craig Smith from South Dakota and football coach Gary Andersen. Smith made the NCAA Tournament in his debut season, the school’s first appearance in eight seasons, while Andersen went 7-6 and earned a bowl berth last season.

Analysis: Terry Mohajir was a starting safety at Arkansas State and then later a graduate assistant and offensive line coach at Kansas. That football experience has paid off as he has had a great track record hiring football coaches since becoming AD at his alma mater in September 2012. Three months after returning, he had to replace football coach Gus Malzahn, who left for Auburn. Mohajir hired Texas co-offensive coordinator Bryan Harsin, who went 7-5 and won a Sun Belt title before going to Boise State. Mohajir then turned to North Carolina offensive coordinator Blake Anderson, who has six bowls in as many years (plus two conference titles), extending the Red Wolves’ streak of consecutive bowl appearances to nine. 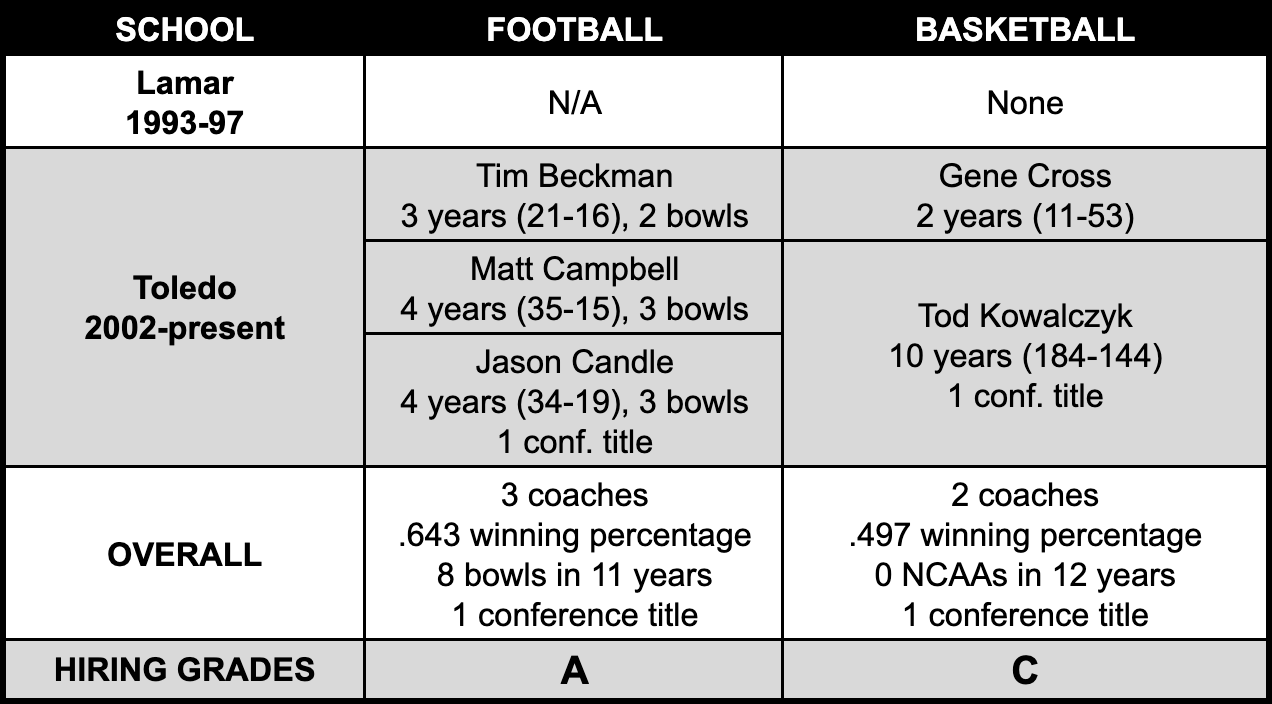 Analysis: Mike O’Brien began as Toledo’s AD in 2002, but didn’t have to make a football hire until Tom Amstutz resigned after the 2008 season. Since then, O’Brien has made three solid hires in Tim Beckman, Matt Campbell and Jason Candle. Beckman left for Illinois after consecutive winning seasons and a pair of bowl appearances. O’Brien then promoted Toledo offensive coordinator Matt Campbell, who won 35 games in his tenure. After Campbell left for Iowa State, O’Brien promoted Toledo OC Jason Candle. In his four seasons, Candle captured the school’s first MAC title since 2004 and had the school’s first 11-win season in over 20 years.

Analysis: Doug Gillin became the AD at Appalachian State on Feb. 27, 2015 after serving as the deputy AD at Missouri since 2012. Prior to his time at Missouri, he spent a decade at IMG College. Gillin hired Eliah Drinkwitz in December of 2018 to replace Scott Satterfield, who left for Louisville, and after a 12-1 campaign this past year, Drinkwitz bolted for Missouri. Gillin promoted Shawn Clark, who had been the offensive line coach at his alma mater for the past four years, to take over for Drinkwitz. On the hoops side, Gillin hired Dustin Kerns, who came over after two seasons at Presbyterian and went 18-15 last season in his first campaign at Appalachian State.

Analysis: The Kansas native was hired in 2017 after more than two decades at Missouri. Bryan Maggard’s lone hire has been Billy Napier, who came from Arizona State to replace Mark Hudspeth after a disappointing end to his tenure. Napier, also a former Clemson offensive coordinator and Alabama receivers coach, has gotten the program back in the right direction after an 11-3 mark in his second season. He was recently targeted by Mississippi State for its opening, but stayed at UL.

Analysis: Wren Baker took over as AD on July 29, 2016. He was the deputy athletic director at Memphis from 2013-15 and at Missouri for about a year before arriving in Denton. He was also the AD at Division II powerhouse Northwest Missouri State from 2011-13. He hired basketball coach Grant McCasland after a 20-win 2016-17 season at Arkansas State, and McCasland has been 61-41 in three seasons and won the regular-season title this past year.

Analysis: Michael Alford took over as the Chippewas’ AD in 2017. His resume includes stops at Oklahoma, Alabama, USC, Cincinnati, the Dallas Cowboys, the Cincinnati Bengals and even ESPN. The former Mississippi State and UAB baseball player has only made one major hire at CMU: football coach Jim McElwain in 2018. McElwain, a former head coach at Florida and Colorado State, inherited a team that went 1-11 the previous season — and he immediately made an impact, going 8-6 last year and reaching the MAC title game.

Analysis: Doug Knuth came on board in 2013 after eight years as a senior associate AD for external relations at Utah. He hit a home run with the hiring of Eric Musselman, who was 110-34 and went to three NCAA Tournaments in his four seasons in Reno before leaving for Arkansas a year ago. Knuth then hired former UCLA head coach Steve Alford to take over for Musselman, and Alford was 19-12 this past season. On the football side, Knuth hired veteran assistant Jay Norvell to replace Brian Polian. Norvell struggled in his first season, but is 15-11 with a pair of bowl appearances in the last two seasons.

Analysis: David Matlin was hired in the spring of 2015, and has a wide array of experience. He started in marketing with the Houston Astros, worked in marketing at the Majestic Theatre and has been the executive director of the Hawai’i Bowl and Diamond Head Classic. He hired football coach, and former Hawaii QB, Nick Rolovich — who just led UH to the school’s first Mountain West title game this past season before leaving for Washington State. Eran Ganot, a former Saint Mary’s assistant, was hired in 2015 and took the ’Bows to the NCAA tourney in his first season. Assistant Chris Gerlufsen filled in for Ganot during a stretch this past season due to Ganot taking a medical leave of absence.