When Oregon coach Chip Kelly left for the NFL after the 2012 season, athletic director Rob Mullens looked to the school’s past when deciding what to do with its future.

That’s why he said he promoted offensive coordinator Mark Helfrich to replace Kelly in what was Mullens’ first major hire since becoming Oregon’s AD in 2010.

Based on Mullens’ promotions of Helfrich and current coach Mario Cristobal, along with the hiring of Willie Taggart, Mullens is Stadium’s choice for the best current Pac-12 athletic director based on his career hirings.

In Helfrich’s second season in charge, the Ducks reached the inaugural College Football Playoff title game. Six years later, they’re still the only Pac-12 team to reach the championship game. However, Mullens fired Helfrich two years after their title game appearance when the Ducks went 4-8 in 2016. Mullens felt the program had dropped off considerably.

“A lot of things changed,” Mullens said. “Some things appeared that made it necessary to go in a different direction.”

Mullens hired Willie Taggart, coming off the first double-digit-win season in South Florida’s history. Taggart went 7-5 in 2017, but four of those losses were without quarterback Justin Herbert, who missed five games with a shoulder injury. A native Floridian, Taggart left after one season for Florida State, which was what he called his dream job.

After Taggart’s departure, Mullens went back to the Ducks’ promotion model — elevating Cristobal, who was co-offensive coordinator and offensive line coach, to head coach.

“When we sat down, yes, in the end [it was an easy decision],” Mullens said. “You’re aware [how] the players [felt about Cristobal] and you get to know him and his DNA … to sit down with someone so passionate.”

That passion has been obvious.

In two seasons, Cristobal has re-energized Oregon’s program to the tune of 21 victories, Pac-12 and Rose Bowl titles. The Ducks enter this fall as the Pac-12 favorites.

“He had the opportunity to be a young coach at FIU and that didn’t end how he wanted,” Mullens said. “And, as he said, he was then able to get his ‘PHD’ [as an assistant] under (Alabama) coach (Nick) Saban. He was ready for a chance at a place like Oregon.

“The culture he’s been able to put together and what we’re doing is really, really phenomenal.”

Analysis: When Chip Kelly left for the NFL after the 2012 season, Rob Mullens made his first big hire at Oregon by promoting offensive coordinator Mark Helfrich. Helfrich’s second season was capped by reaching the inaugural College Football Playoff title game in 2014. However, Helfrich, who was 33-8 in his first three seasons, was fired after going 4-8 in ’16. Mullens then hired Willie Taggart, who was 7-5 (but only 1-4 without injured QB Justin Herbert) before leaving for Florida State. Mullens promoted co-offensive coordinator Mario Cristobal and the Ducks have been humming ever since. They are 21-6 the past two years, including last season’s Pac-12 and Rose Bowl championships.

Analysis: Ray Anderson has made two hires, and he’s gone with big names on both. First, he brought on former Duke star Bobby Hurley after a couple of quality seasons at Buffalo. Hurley was set to go to his third straight NCAA tourney this past season, something that hasn’t been done in Tempe since the 1960s. Anderson grabbed former NFL coach Herm Edwards from ESPN a couple years ago and he’s been solid thus far with appearances in the Las Vegas and Sun Bowls.

Analysis: Jennifer Cohen replaced Scott Woodward in 2016, and she then parted ways with Lorenzo Romar in 2017. She went with a surprise hire, tabbing Syracuse coach-in-waiting Mike Hopkins, who is 63-39 with one NCAA Tournament appearance in three seasons. On the football side, Cohen just promoted Jimmy Lake after Chris Petersen announced he was stepping down. 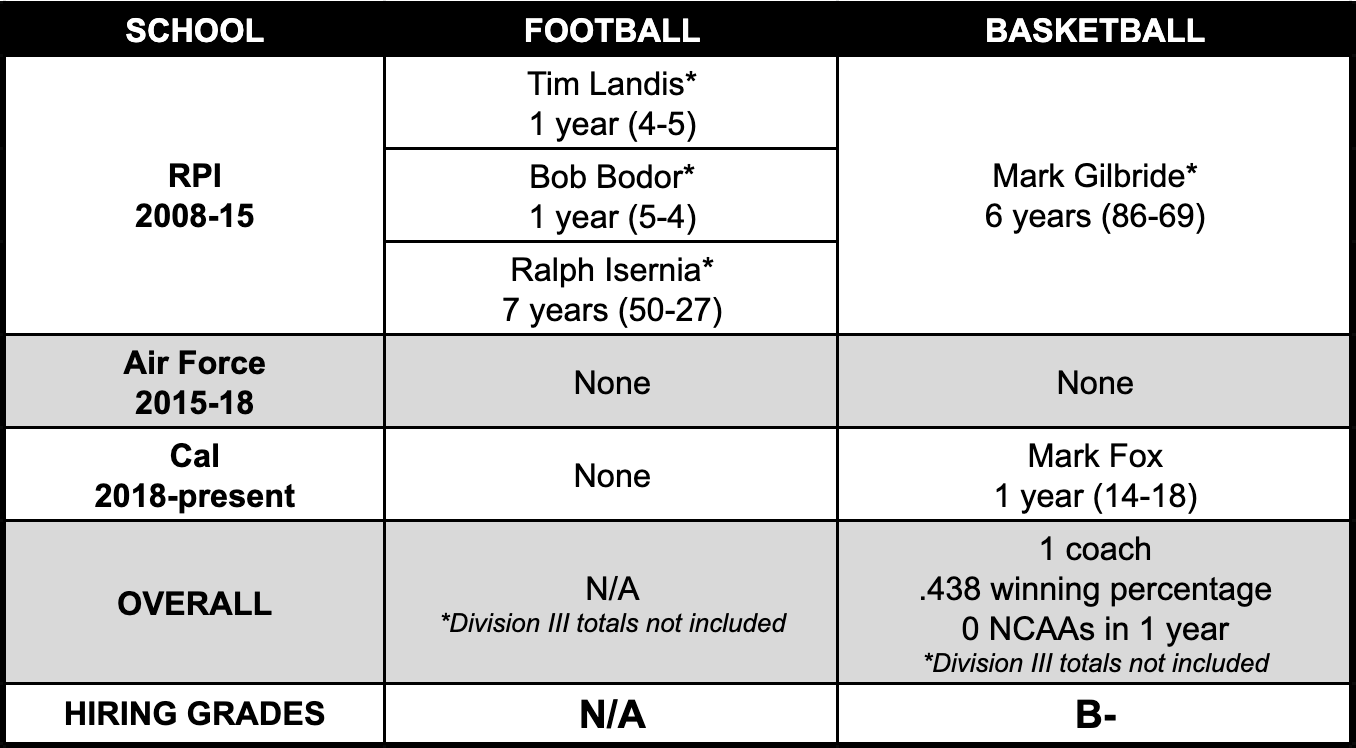 Analysis: Jim Knowlton was at Division III RPI from 2008-15 and hired Mark Gilbride in 2014 to replace the legendary Mike Griffin. He also hired three football coaches at RPI, but has made just one football or men’s hoops hire at the D-1 level, and that came a little more than a year ago when he hired former Nevada and Georgia coach Mark Fox at Cal. Fox has already started to get the program headed in the right direction after a couple of abysmal seasons. 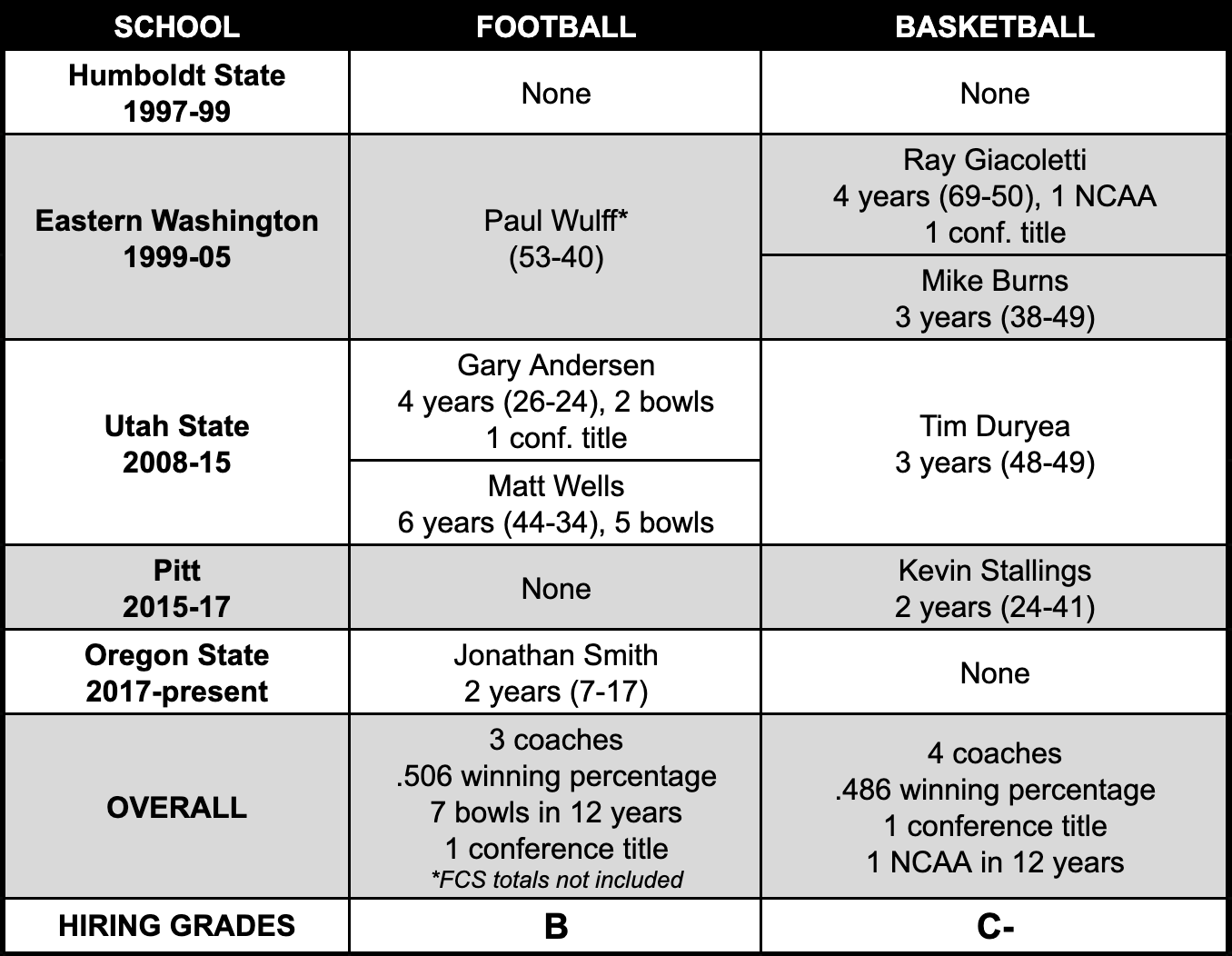 Analysis: Scott Barnes’ best hires came on the football side at Utah State with Gary Andersen the first time around and then with Matt Wells. The pair turned around the program and took the Aggies to seven bowls in 10 years. Barnes also hired Jonathan Smith at Oregon State, but that hasn’t fared well in the first two years. The basketball hires have been underwhelming with the Kevin Stallings hire checking in as the worst. Stallings was fired after two years and a 24-41 mark at Pittsburgh. Barnes did well with the Ray Giacoletti hire at Eastern Washington, but Mike Burns (EWU) and Tim Duryea (Utah State) each only lasted three years.

Analysis: This is actually Rick George’s second stint with the Buffs. The first came in 1987 when George was named Colorado’s football recruiting coordinator by coach Bill McCartney. George’s recruiting background came in handy when he had to hire two football coaches over a 14-month period. First, after firing Mike MacIntyre, George hired Mel Tucker, then a defensive coordinator at Georgia. Tucker had a promising 5-7 debut but left in February for Michigan State after Mark Dantonio’s sudden retirement. Having to find a replacement for Tucker three months after coaching changes usually occur, George opted for Karl Dorrell, who was 35-27 in five years at UCLA from 2003-07. 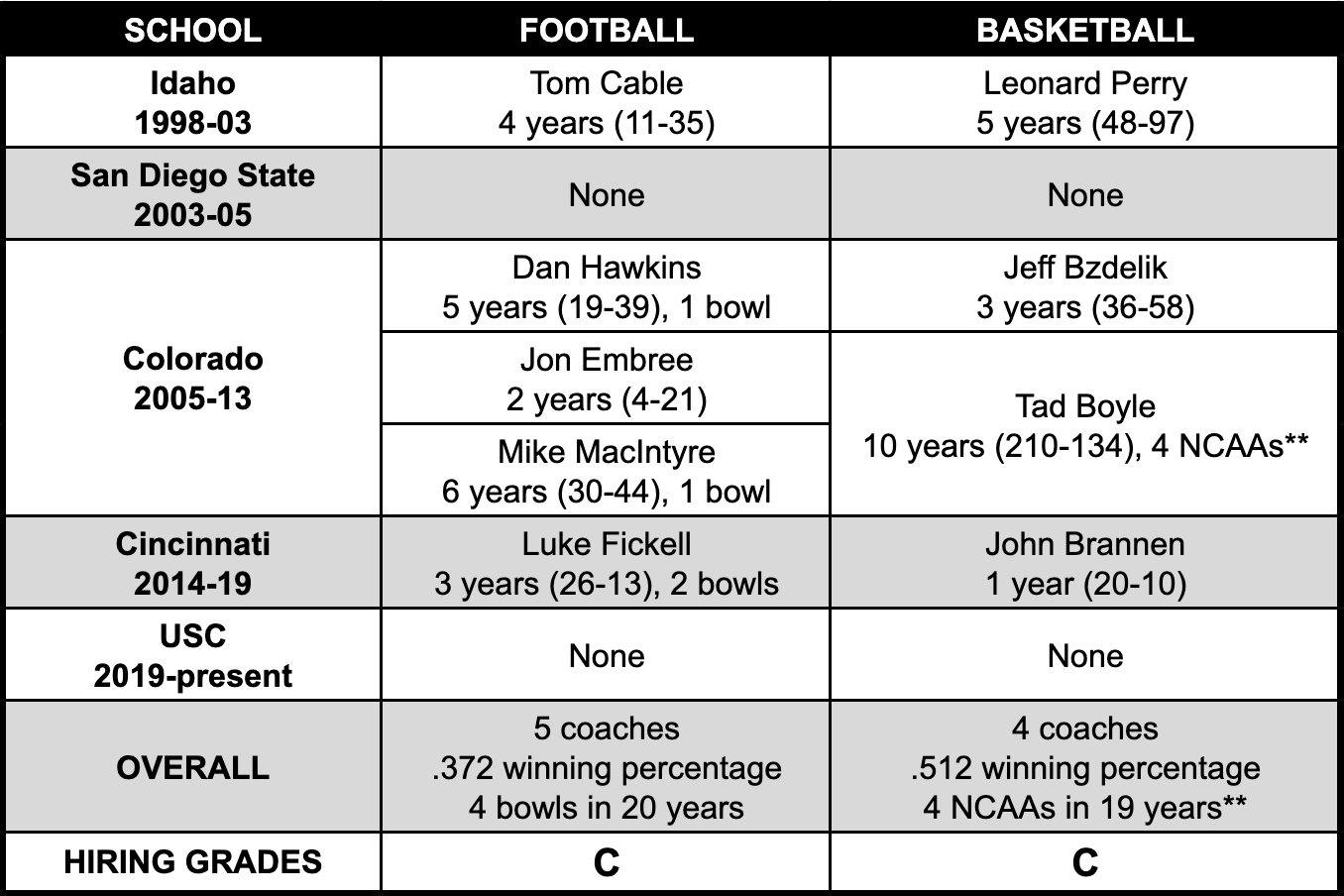 Analysis: Mike Bohn came to USC from Cincinnati, where he had the most successful hire of his career in Luke Fickell. Bohn hired Fickell, then co-defensive coordinator at Ohio State, after Tommy Tuberville resigned. The past two years, Fickell has led the Bearcats to consecutive double-digit win seasons for the first time at UC since 2011-12. Prior to Cincinnati, Bohn was AD at Idaho, San Diego State and Colorado. In nine years with the Buffs, Bohn hired football coaches Dan Hawkins, Jon Embree and Mike MacIntyre — ultimately firing Hawkins and Embree — before resigning in May 2013. Nine months later, he was hired at Cincinnati. 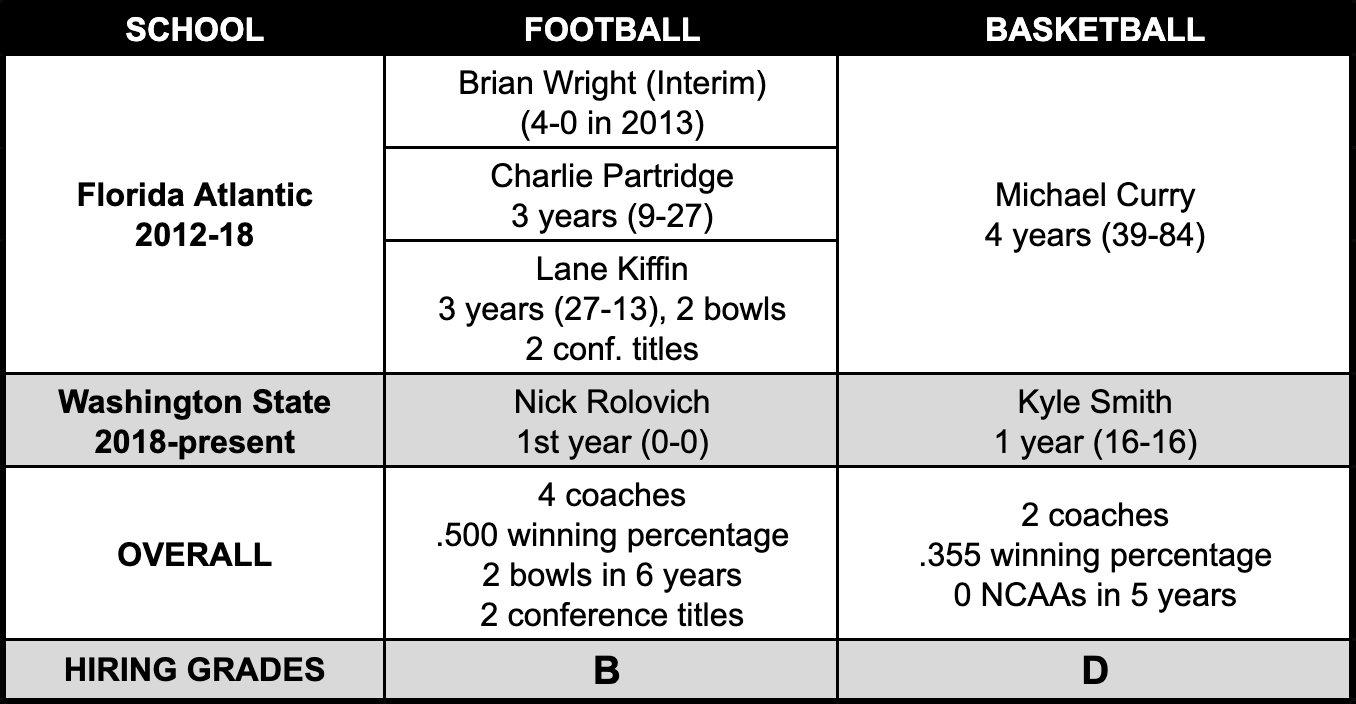 Analysis: Pat Chun became the first Asian-American athletic director at a Power Five school when he was hired at Washington State from Florida Atlantic in 2018. At FAU, Chun’s major hires were football coaches Charlie Partridge (who Chun ended up firing after three seasons) and Lane Kiffin. Chun did what a lot of ADs back then wouldn’t do and took a chance on Kiffin, then Alabama’s offensive coordinator. It paid off. In three seasons, Kiffin won 27 games and two C-USA titles. When longtime Washington State coach Mike Leach left for Mississippi State in January, Chun went for another great offensive-minded coach and hired Hawaii head coach Nick Rolovich. 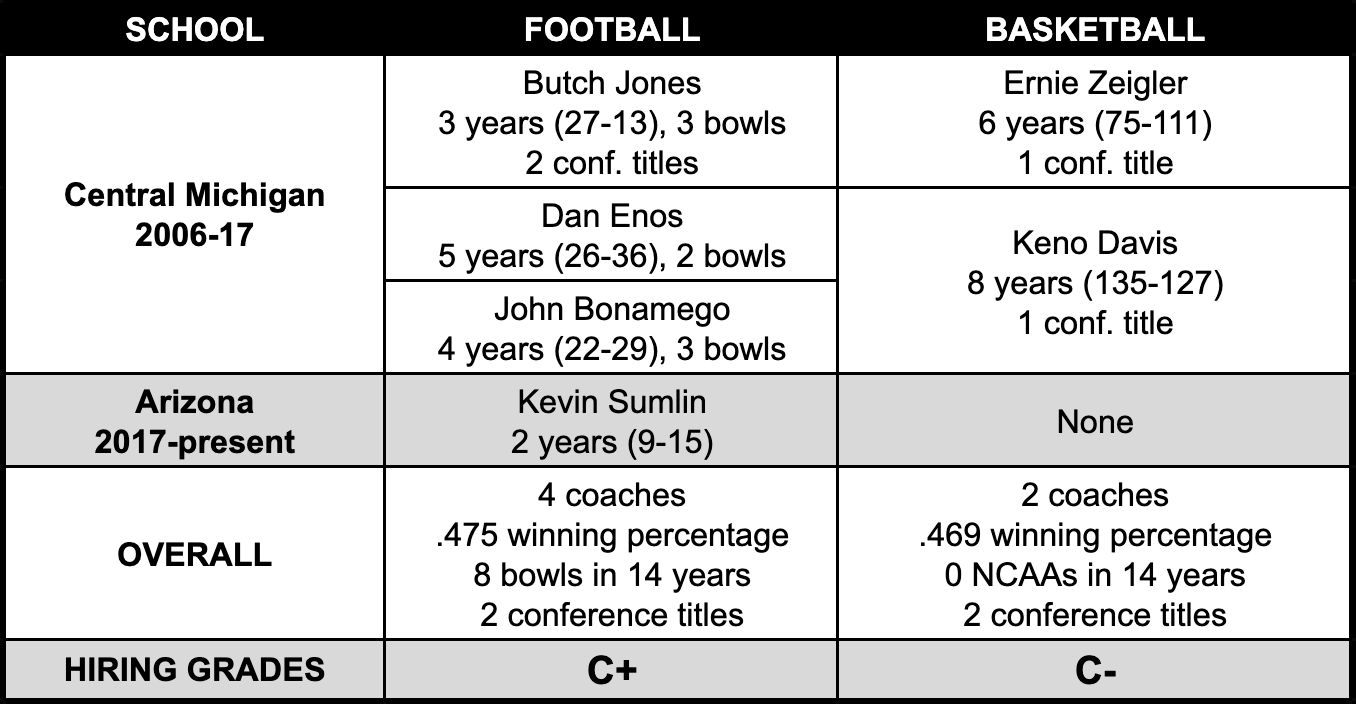 Analysis: At Central Michigan, Dave Heeke’s most successful decision was his first football hiring. Heeke hired Butch Jones, then a wide receivers coach at West Virginia, to replace Brian Kelly, who left CMU for Cincinnati. Jones guided the Chips to three consecutive bowls and two MAC titles. Jones’ 27 victories were the school’s most in a three-year stretch in nearly 30 years. After Jones, Heeke’s next three football hires — Dan Enos and John Bonamego at Central Michigan and Kevin Sumlin at Arizona — didn’t fare as well, with the three coaches combining for a sub-.500 record.

Analysis: Bernard Muir hasn’t had to make a move on the football side since arriving at Stanford in 2012. However, he did part ways with Johnny Dawkins and wound up hiring Jerod Haase following a C-USA regular-season title in his fourth season at UAB. Haase is 68-61 in four seasons and looked poised to finally breakthrough and make an NCAA tourney this past season with the Cardinal.