Scott Woodward returned to his alma mater LSU as athletic director last year. While Woodward hasn’t made any major hires at LSU, he has a strong track record at his previous stops of Washington and Texas A&M.

Because of his career hirings — specifically Chris Petersen at Washington — Woodward is Stadium’s top current SEC athletic director based on football and men’s basketball hirings.

His first football hiring was probably the most difficult.

If they were unable to find a candidate from one of those groups, they would then consider coordinators.

“We fell to that, frankly,” Woodward said.

Based in part on a recommendation from then-USC coach Pete Carroll, Woodward hired USC offensive coordinator Steve Sarkisian, who turned the program around. After a 5-7 debut, Sarkisian reeled off four consecutive winning seasons before leaving to be USC’s head coach.

Woodward had plenty of interested parties for his next hire, but ultimately got one of his top targets in Boise State’s Chris Petersen. In his most impressive hire, Woodward was able to do what so many others had unsuccessfully tried: get Petersen to leave Boise.

“It was good timing and our program had gotten back [under Sarkisian] to where it needed to be at Washington,” Woodward said. “Back to the level [legendary coach] Don James had had it.”

Looking back, Woodward believes that Washington’s 38-6 rout of Petersen and No. 19 Boise State in the 2013 season opener made the Huskies job more attractive to his future head coach.

“We whipped them pretty good — and our brand-new facilities, brand-new stadium — I think that made a difference,” Woodward said. “And Petersen was ready to make a change.”

Petersen was at UW for six years until he stepped down last season. His 32 victories from 2016-18 were the most in a three-year run in Washington history.

In 2016, Woodward left Washington for Texas A&M, where he had two huge hires in football coach Jimbo Fisher and basketball coach Buzz Williams. Woodward returned to LSU in 2019, and with Texas A&M and LSU both in the SEC West, he’ll experience many encounters against Fisher and Williams.

“It’s like fighting with your younger brother,” Woodward joked. “You love ‘em, but you want to kill ‘em when you’re fighting them.” 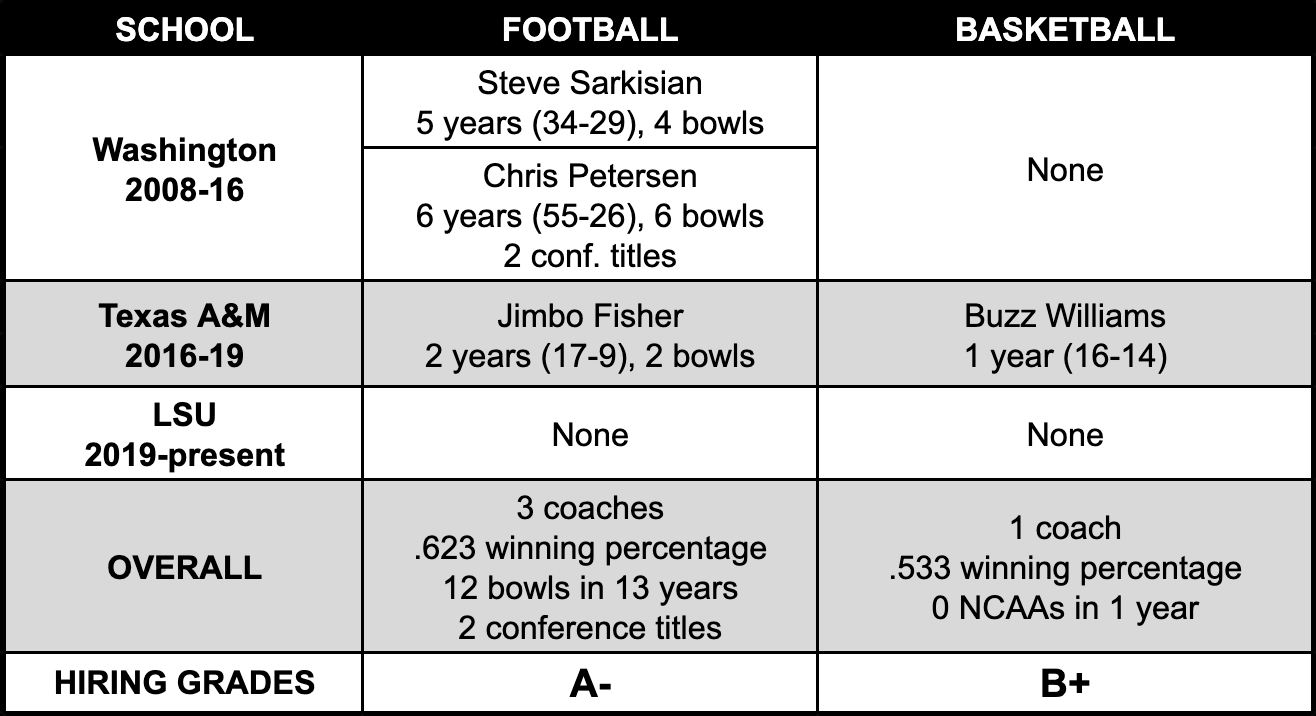 Analysis: Scott Woodward has yet to make any major hires at LSU since taking over at his alma mater last year, but he has an impressive track record at his previous stops. At Washington, Woodward hired USC offensive coordinator Steve Sarkisian, who inherited a program that just went 0-12 and had five consecutive losing seasons. Sarkisian had four consecutive winning seasons before leaving for USC. Woodward then convinced Chris Petersen to leave Boise State and Petersen made UW elite: three consecutive double-digit win seasons, two Pac-12 titles and a College Football Playoff appearance. At Texas A&M, Woodward had two solid hires in Jimbo Fisher and Buzz Williams, who should both pay off in the long run for the Aggies.

Analysis: In his first AD job at Mississippi State, Greg Byrne made a magnificent hire in Dan Mullen, then an offensive coordinator at Florida. Mullen led MSU to eight bowls in nine years and the Bulldogs were ranked No. 1 in the inaugural College Football Playoff rankings in 2014. At Arizona, Byrne hired Rich Rodriguez, who worked in television a year after his firing at Michigan. Rodriguez’s highlight was taking the Wildcats to a New Year’s Six bowl. Byrne has been at Alabama since 2017 and made a solid hire with new basketball coach Nate Oats. However, Byrne’s biggest decision will be replacing Nick Saban, who’s now 68 years old, when/if he ever retires.

Analysis: Of the current SEC athletic directors, Greg McGarity has made the top football hire in Kirby Smart, who was Alabama’s defensive coordinator for eight years under Nick Saban before coming to Georgia. In four years with the Bulldogs, Smart has an SEC title, a College Football Playoff appearance (the only SEC team other than Alabama to qualify) and is 3-1 against rival Florida. Georgia also is the SEC’s only team that has ranked in the top seven of the final AP Poll each of the past three years. On the basketball side, the Bulldogs have struggled under Tom Crean, who was hired two seasons ago by McGarity. 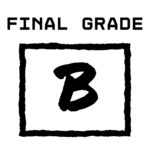 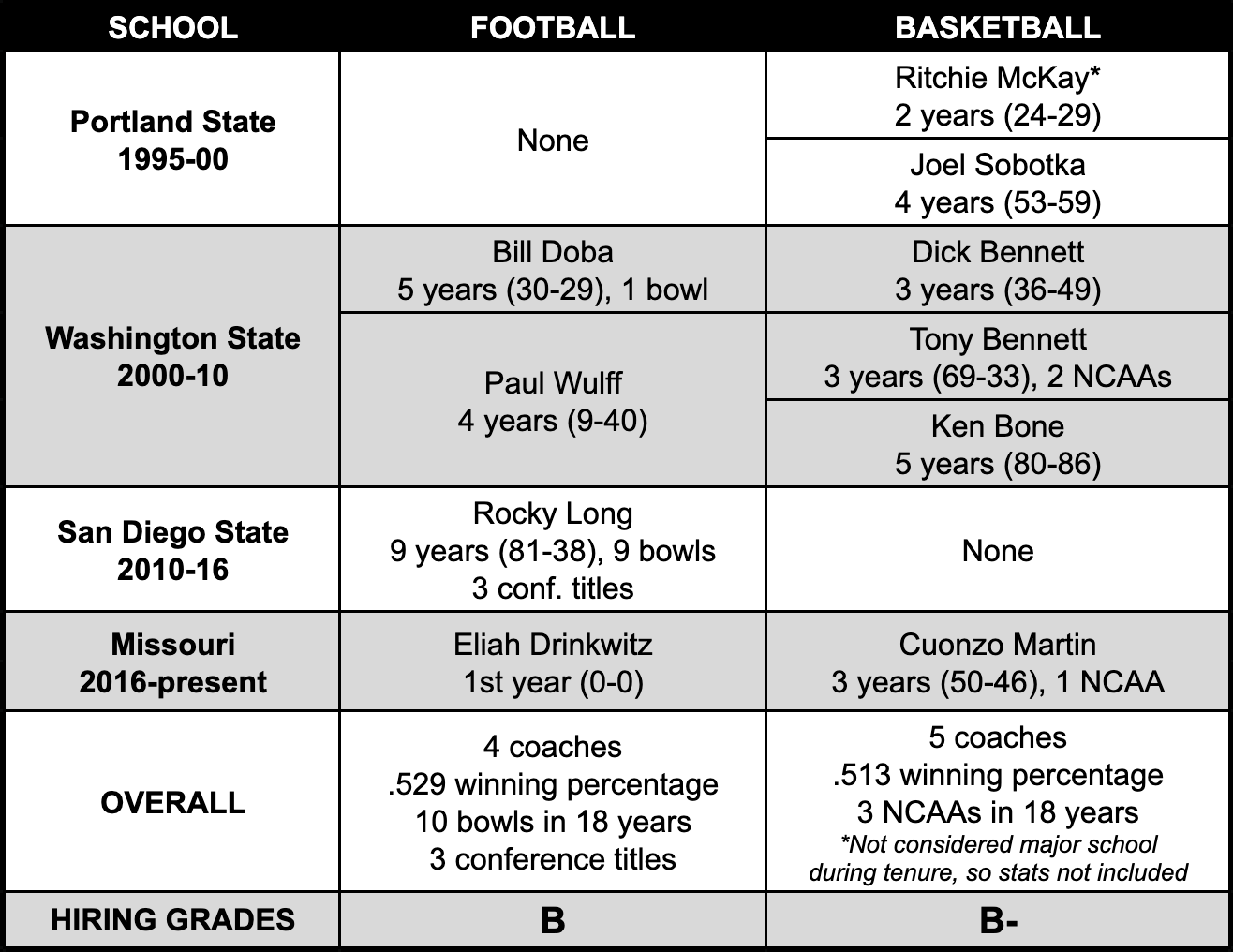 Analysis: Jim Sterk has been an AD at four different stops since 1995: Portland State, Washington State, San Diego State and Missouri. He’s made nine hires — four football and five men’s basketball — and it’s been a mixed bag. He hired Tony Bennett to succeed his father at Washington State and the younger Bennett was terrific, going to two NCAA Tournaments in three years and a Sweet 16. He also hired Rocky Long while at San Diego State, and he went to nine bowls in nine seasons. But Sterk’s been responsible for some mediocre hires, like Bill Doba (30-29) on the football side at Washington State and basketball coach Joel Sobotka (53-59) at Portland State. The jury is still out on his Missouri hires: Cuonzo Martin (50-46) and Eliah Drinkwitz, who was just brought on after a 12-1 season at Appalachian State. 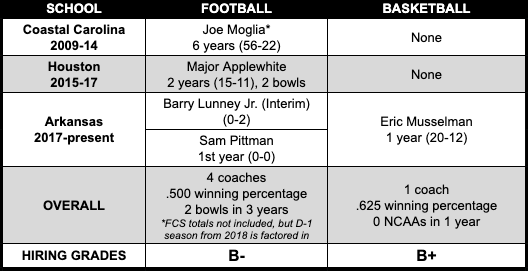 Analysis: Hunter Yurachek arrived at Arkansas after a combined nine years at Coastal Carolina and Houston. Yurachek had the unenviable task of replacing Tom Herman at Houston and promoted offensive coordinator Major Applewhite. Despite 15 wins in two years, Applewhite was fired after losing 70-14 to Army in the 2018 Armed Forces Bowl. At Arkansas, Yurachek had a solid hire in hoops with Eric Musselman, who had 20 wins in his debut season before college basketball was canceled. On the football side, Yurachek just hired respected offensive line coach Sam Pittman to rejuvenate Arkansas’ program.

Analysis: Ross Bjork is on his third AD job in the past decade after moving from Ole Miss to Texas A&M in 2019. He was the youngest FBS athletic director when he was hired at Western Kentucky in 2010. After firing Ken McDonald, Bjork hired assistant Ray Harper, who got results on the court with two NCAA Tournament appearances, but resigned after five seasons due to off-the-court issues involving players. Bjork left for Ole Miss in 2012, and hired assistant Matt Luke to succeed Hugh Freeze in 2017. While Luke is already gone after three years, Bjork’s basketball hire has been far more successful. Bjork went with long-time head coach Kermit Davis from Middle Tennessee and Davis got the Rebels to the NCAA tourney in his first season.

Analysis: John Cohen was Mississippi State’s baseball coach for eight seasons before becoming the Bulldogs’ athletic director in 2016. When football coach Dan Mullen left after the 2017 regular season for Florida, Cohen’s first major hire was Penn State offensive coordinator Joe Moorhead as Mullen’s replacement. Moorhead’s success with the Nittany Lions didn’t transfer to Starkville and he was fired after two seasons and a 14-12 record. Cohen said there were “other issues at stake” besides wins and losses in firing Moorhead, so he sought the “best fit” for the next coach. That turned out to be the eccentric Mike Leach, one of the nation’s top offensive minds, who won 139 games in 18 seasons at Washington State and Texas Tech.

Analysis: Phil Fulmer replaced John Currie as athletic director in 2017 at Tennessee, where he was the Vols’ football coach from 1992-2008. After Currie wasn’t allowed by UT officials to hire Greg Schiano or Mike Leach to replace the fired Butch Jones, Fulmer came on board and landed Alabama defensive coordinator Jeremy Pruitt. Pruitt had a rough start, losing 12 of his first 19 games with the Vols. However, Tennessee ended strong last season as the Vols closed the year on a six-game winning streak.

Analysis: Scott Stricklin was the sports information director at Kentucky from 2003-2008. He left to become senior associate AD for Mississippi State, and then took the athletic director job in 2010. He was tasked with cleaning up the mess that Rick Stansbury left behind, and wound up going with Rick Ray — who tidied things up, but was just 37-60 and fired after three years. Stricklin replaced Ray with former UCLA head coach Ben Howland, who has gone to one NCAA tourney in his five seasons in Starkville. Stricklin was hired to replace Jeremy Foley at Florida in 2016, and his lone full-time hire thus far has been a grand slam with Dan Mullen, who is 21-5 in two seasons. 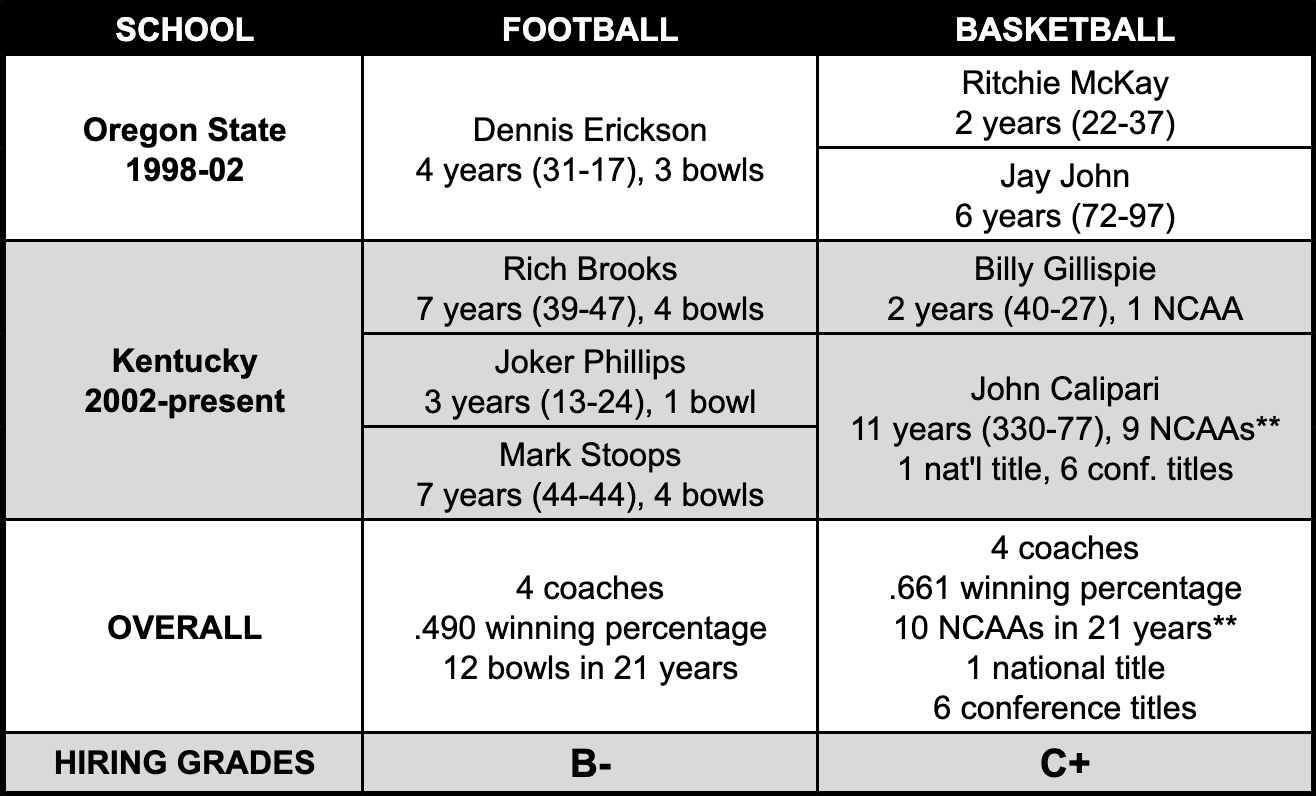 Analysis: Mitch Barnhart came to Kentucky in 2002 after four years as the athletic director at Oregon State — and he’ll forever be known as the one who brought John Calipari to Lexington. However, as great of a hire as Cal has been, Barnhart’s other basketball hires have been underwhelming. It started with Ritchie McKay (22-37) and Jay John (72-97) at Oregon State, but the worst one was Billy Gillispie, who was a terrible fit and lasted just two years at UK. On the football side, Barnhart has done fairly well. Dennis Erickson went to three bowl games in four years at Oregon State, while Mark Stoops has found his footing at UK.

Analysis: Ray Tanner was South Carolina’s baseball coach for 16 seasons before becoming the Gamecocks’ athletic director in 2012. When Tanner took over as AD, Steve Spurrier was in the midst of his 11-year career with USC before he ultimately stepped down during the 2015 season. Tanner chose Will Muschamp to be Spurrier’s replacement, and he took South Carolina to bowl games in his first three seasons before dropping to 4-8 last season. Muschamp is one game over .500 in four years with the Gamecocks.

Analysis: The former Ole Miss All-American basketball player took over as athletic director on Nov. 22, 2019 after having the interim tag removed, and he had a huge hire right away on the football side. Keith Carter went with Lane Kiffin — the well-traveled former Oakland Raiders, Tennessee and USC head coach who had been at FAU for the past three years. Kiffin will try and get the program back on track after three mediocre seasons from Matt Luke.

Analysis: Allen Greene, 43, was hired in January of 2018 after serving as the AD at Buffalo since 2015. The Seattle native played baseball at Notre Dame and also spent a few years playing minor league ball. He inherited Lance Leipold and Nate Oats at Buffalo, and Gus Malzahn and Bruce Pearl at Auburn.

Analysis: Candice Storey Lee was recently promoted after serving as the interim AD following the departure of Malcolm Turner. Lee is a former Vandy women’s basketball player who has worked in the athletics department for nearly 20 years. As for her current coaches, Derek Mason (27-47 overall) returns on the football side, while basketball coach Jerry Stackhouse is back after going 11-21 in his first season in Nashville.