The tournament after a major on the PGA schedule usually is a weaker-field event as the top players take a breather after a high-pressure week. However, the RBC Heritage provides a relatively strong field just days after the final round of the Masters. Geography likely plays a part with this event being in South Carolina, and it’s a short course, which gives players from all skillsets the chance to win.

Here are some players I’m looking to target in the betting markets this week:

It was a disappointing Masters for me, as three of the six players I bet to win outright missed the cut. Patrick Cantlay was one of those players after I added later in the week. Cantlay also let me down at THE PLAYERS Championship last month with a missed cut. I thought his strong start to the season in California would lead to a breakthrough at one of the bigger tournaments this spring.

It would be easy to write off a player that disappointed the previous week, but I’m going to give Cantlay one more chance at a course he’s played well at. He has a trio of top-7 finishes in his only three trips to Harbour Town, including tied-for-third finishes in 2017 and ’19. If I bet on Cantlay at 20/1 at the Masters, then backing him around the same price in a weaker field seems like a good spot to buy low and hope taking the extra days off can benefit him.

The other two players I bet on to win the Masters outright that missed the cut were Daniel Berger (22/1) and Sergio Garcia (40/1). Berger finished tied for third and Garcia was tied for fifth at this event last June when it was the second tournament after the COVID-19 pause.

The last time Berger missed the cut was at the Waste Management Open two months ago and he won the AT&T Pebble Beach Pro-Am the next week. That makes him appealing for this week, but I’m going to stay away before the tournament because of concerns of a rib injury.

Garcia led the field in strokes gained tee-to-green last year at the Heritage, but I don’t trust his putting enough at his current odds. I will look to target both Berger and Garcia in full tournament head-to-head matchups.

When I think of short courses in the southeast region of the United States, both Kuchar and Kisner stand out. Both were priced as good as 75/1 on Monday before moving to 60/1 on Tuesday morning.

Kuchar has a tremendous course history here. He hasn’t missed a cut since his first appearance in 2003, he won in ’14 and finished tied for second two years ago the last time this event was played in its normal April time slot. Kuchar finished in third place last month at the WGC-Match Play in Austin at a course designed by Pete Dye, who was also the architect of Harbour Town. Getting the extra rest after missing the cut last week at Augusta is what gets me over the top to place a bet on Kuchar and I will also look to bet him to finish in the top 10.

Kisner also excels at Pete Dye courses and missed the Masters cut. Oddly, the South Carolina native shot even par on Thursday when the course was playing more difficult and shot five-over par the next day to fail to make the weekend. I like Kisner to bounce back here at a course that suits his game and will also take him to finish top 10.

When looking for names in this range, I’m looking for players who have recently played well tee-to-green or with approach, who have been cold with their putter. Doug Ghim fits the mold this week in his first time at this event.

Ghim ranked seventh in the field in strokes gained tee-to-green the week before the Masters at the Valero Texas Open. The putting let him down as he was one of the worst in that category over four rounds and he finished tied for 44th in Texas. After looking at those metrics, I decided that I want to consider betting on Ghim for the rest of this year at big numbers until he gets a win – I bet him at an early 140/1 price before his odds got slashed overnight.

Ghim’s best finish of his career was a tied-for-fifth showing at The American Express, which is at a Pete Dye course in California. He also performed well for three rounds at THE PLAYERS Championship, another Dye course, before a final-round 78 sunk him down the leaderboard. Ghim was actually in the second-to-last group on Sunday with eventual champion Justin Thomas. I also will be betting Ghim to finish in the top 20.

Follow my Twitter account for the rest of the golf bets I make this week. You can find my golf writing on watchstadium.com or in the Stadium newsletter on Tuesday mornings. I will not be writing about next week’s Zurich Classic of New Orleans because it’s a team event. 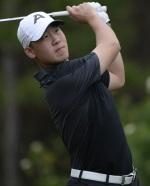