Why Sam Darnold Should Learn From Josh Rosen

USC quarterback Sam Darnold is entering the 2017 college football season as a Heisman Trophy candidate, but the Trojans’ star can learn a lot from crosstown rival Josh Rosen and his career with the UCLA Bruins.

Life comes at you pretty fast. If you don’t stop to look around once in awhile, you might get blindsided by a 242-pound outside linebacker.

Even if Sam Darnold hasn’t seen Ferris Bueller’s Day Off, the USC quarterback could head across town and snag similar advice from the enemy.

If anyone knows how quickly fortunes can turn into misfortunes, it’s Josh Rosen. After all, it was only one year ago the UCLA quarterback was approaching a situation similar to that of Darnold.

In the spring of 2016, Rosen was being prepped for what was supposed to be a sophomore season festooned with Heisman Trophy votes and a College Football Playoff candidacy. It was to be the second step in building Rosen’s stock as the eventual No. 1 overall pick in the 2018 NFL Draft.

Now, with a quick tap of the reset button, we’re sitting here and propping up Darnold as the eventual No. 1 pick in next year’s draft.

Rosen, meanwhile, is plotting his comeback.

In a less than stellar showing last season, he suffered a shoulder injury and fought off headlines claiming he had sustained nerve damage from the surgery to repair that injury. But Rosen appears to be recovering nicely, as he’s taking part in the Bruins’ spring practice and is spinning the ball smoothly without pain.

For all intents and purposes, Rosen is on track to regain his role as UCLA’s starting quarterback. And even though he’ll be paired with his third offensive coordinator in three years, new OC Jedd Fisch could prove beneficial to Rosen on his road back to stardom. Fisch worked well with Jake Rudock and Wilton Speight at Michigan, and he could work similar wonders with the Bruins’ junior quarterback.

But both we and Rosen will have to take it one step at a time. As much as we would like to see him healthy and thriving on the field like he did as a true freshman, it is a process, and it’s better to execute something properly than it is to execute it quickly — possibly why Rosen didn’t play the second half of last season. 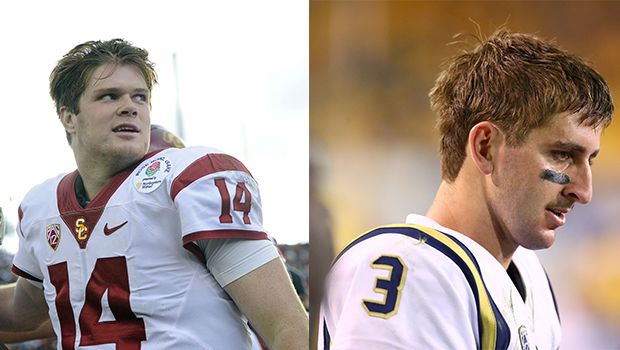 As Rosen continues his mission, Darnold should be watching closely.

This time last year, while Rosen was still the darling of college football writers across the country, Darnold was simply QB-2 on the Trojans’ depth chart. Few outside of Los Angeles knew his name, but now every Heisman Trophy voter and the entire CFP committee have Darnold on their radars, and he needs to be careful.

That isn’t to be taken as Darnold needing to scale back the way he plays or go half-speed to avoid injuries. It’s meant as how he should keep Rosen’s situation in the back of his mind as a constant reminder of how quickly things can change.

USC offensive coordinator Tee Martin told Campus Insiders that he’s been preparing Darnold as though the 2016 season never happened, in order to maintain that same fire and desire to win.

Maybe that’s the wrong approach, though. Maybe the trick to elongated success isn’t to repress the glory but to air out the failures.

It’s the idea that in the blink of an eye, one play or one hit, everything can be taken away. It’s the notion that, whether in life or in football, there are no certainties, and nothing lasts forever.

As cliché as it sounds, it’s the reality of the two L.A. stars’ currently contrasting careers.

If Rosen is smart, he’ll take advantage of every snap he gets for UCLA and every down he plays in the NFL. If Darnold is smart, he’ll keep one eye on his crosstown rival and play the game the same way.

And if we’re lucky, on Nov. 18, we’ll get our first look — probably the only look — at a heavyweight battle between two star quarterbacks in the heart of southern California.