SEC Basketball Coaches Rank the Best Jobs in the Conference

This is how polling in the SEC shook out among coaches who voted, with one being the best and 14 being the worst: 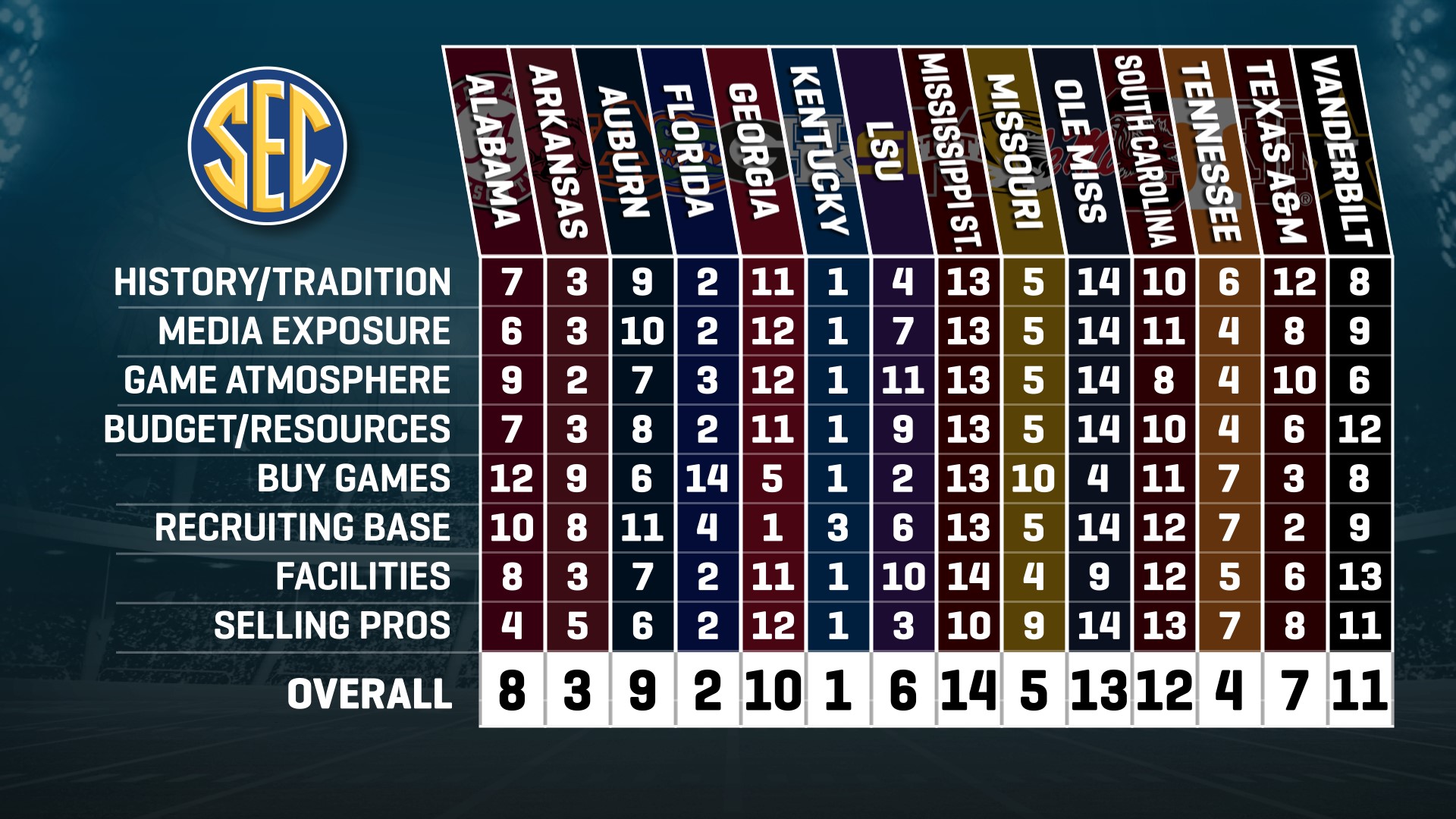 1. KENTUCKY (110) – It’s arguably the best program in the country with more wins than anyone else, and also a record 59 NCAA Tournament appearances. The Wildcats have won eight national titles, but just one in the last 20 years. They have history, support, pros, TV exposure — virtually anything and everything you’d want.

Where they win: “Where don’t they win?  They have absolutely everything. Resources, support, and they don’t have to recruit sh*theads. They can basically recruit whoever they want.” – SEC assistant coach

Where they lose: “The expectations. The fans are insane and expect you to go to the Final Four every year.” – SEC head coach

2. FLORIDA (89) – The Gators won two national titles under Billy Donovan in 2006 and 2007 and have been a mainstay in the NCAA tourney since the late 1990s. Donovan turned it into a big-time job, and the Gators rank second behind Kentucky in history, TV exposure, facilities, resources and pros.

Where they win: “Weather is obviously a big sell, and so is the recent history. It’s still a football school, but the resources are now there for basketball.” – SEC head coach

The knock: “Fan support. You watch some of their games, and it looks empty in the building — especially for the non-conference games. It’s still a football school.” – SEC assistant

3. ARKANSAS (84) – The Razorbacks won a national title in 1994 under Nolan Richardson and lost in the championship game the following season. However, Arkansas hasn’t been to the Sweet 16 since 1996. Stan Heath went to the tourney twice in five years, John Pelphrey went once in four seasons and Mike Anderson went three times in eight years. Arkansas ranks in the top three in history, TV exposure, game atmosphere and resources.

Where they win: “It’s one of the few jobs in the league where basketball comes first, and the fans in Arkansas love their Razorbacks. It’s not easy to go into Arkansas and get a kid out of there.” – SEC assistant

The knock: “Fans are still living in the past and compare everything to Nolan Richardson. They haven’t really done anything in 20 years, but the expectations are still high.” – SEC head coach

4. TENNESSEE (76) – There hasn’t been a Final Four appearance, but there’s been plenty of success: Eight Sweet 16 appearances, including one this past season under Rick Barnes. The program has also produced big-time pros like Bernard King, Ernie Grunfeld and Allan Houston.

Where they win: “The fanbase is crazy. It matters to them. Big-time facilities and support.” – SEC assistant coach

The knock: “Men’s basketball doesn’t have the history of women’s hoops. They haven’t won national titles. There’s also not much in terms of an in-state recruiting base.” – SEC head coach

5. MISSOURI (72) – The Tigers have been to the Sweet 16 on seven occasions. Norm Stewart got it going in the 1970s and kept Mizzou relevant through the mid-1990s. Quin Snyder went to the NCAA Tournament his first four seasons before struggling at the end of his tenure. Mike Anderson went dancing during his final three years, but Missouri struggled under Kim Anderson. Now, Cuonzo Martin is trying to rejuvenate the program. Missouri ranks in the top five in history, TV exposure, recruiting base, facilities, game atmosphere and budget.

Where they win: “Facilities, and it’s the only game in town, so fans really support the program.” – SEC assistant coach

The knock: “It’s tough to get to. It’s 100-plus miles from St. Louis and Kansas City, and the airport in Columbia is small and doesn’t have a lot of direct flights.” – SEC assistant coach

Where they win: “They have had a lot of NBA guys come out of there — Maravich, Shaq, Ben Simmons, Chris Jackson. The fans are also passionate.” – SEC assistant coach

The knock: “The facilities suck. The arena stinks, and the practice facility is bad, also.” – SEC head coach

7. TEXAS A&M (65) – There’s been some history with 14 NCAA Tournament appearances, but the Aggies have yet to reach an Elite Eight. Texas A&M has also sent some recent players to the NBA with DeAndre Jordan, Khris Middleton and Robert Williams. There’s a fertile recruiting base that ranks second in the league, and the facilities and support both rank towards the top.

Where they win: “Players and resources. Sure, it’s a football school, but they still put in cash for the basketball program … and there are plenty of players within a short drive.” – SEC assistant

The knock: “The battle for Texas kids from all the in-state schools. You’ve got Texas, Baylor, and, now, Kelvin Sampson and Chris Beard are tough to beat.” – SEC assistant

Where they win: “Players within the region that grew up as Alabama fans. For everybody who says it’s a football school, they will support any level of success with the basketball program. The football program also helps.” – SEC assistant coach

The knock: “The perception is that football is the only thing that matters.” – SEC head coach

9. AUBURN (56) – The Tigers went to their first-ever Final Four this past season, and it was their fifth Sweet 16 appearance. The program has produced some big-time players: Charles Barkley and Chuck Person being two of the better-known guys who excelled in the NBA. However, Auburn ranks in the middle in most of our categories.

Where they win: “The facility is the perfect size, and the fans love their Auburn Tigers. They will come out and support it if you win.” – SEC head coach

The knock: “Probably success — until the last few years. It’s also a state where Alabama is viewed as the king, so Auburn has to deal with that.” – SEC assistant

10. GEORGIA (45) – There was a Final Four appearance back in 1983, but there have been just a trio of NCAA tourney appearances since 2002. The recruiting base is the best in the league, but everything else ranks towards the bottom.

Where they win: “In-state talent is the best thing about the job.” – SEC assistant coach

The knock: “It’s a football school, and they don’t really care about basketball.” – SEC assistant coach

11. VANDERBILT (44) – The Commodores have gone to the Sweet 16 six times, with the last being in 2007. Kevin Stallings reached the NCAA Tournament seven times in his tenure, but it’s considered a tough job with antiquated facilities and a budget that doesn’t compare to most of the other SEC schools. Academics also make the job more difficult.

Where they win: “The city is unbelievable and Nashville has talent, but the issue is whether Vandy can get kids into school.” – SEC head coach

The knock: “It’s hard to get dudes in. The average kid can’t get into Vandy, and the league isn’t like that. You’re an Ivy league school and you are in a league where almost every school can get in whoever they want. Also, the arena isn’t a high-major arena.” – SEC assistant coach

12. SOUTH CAROLINA (33) – Frank Martin took South Carolina to its first Final Four in 2017, which was also the first time the program had gotten past the Sweet 16. There’s been some history, but not a ton, especially in recent years. It’s a tough job, one that ranks in the bottom half in every category.

Where they win: “Columbia is a cool city, and the administration at South Carolina gets it. There’s also plenty of diversity at the school.” – SEC head coach

The knock: “It’s a small state, so there’s not always a ton of high-level talent coming out of there. They also need to upgrade their facilities. They are solid, but there aren’t many bells and whistles.” – SEC assistant coach

13. OLE MISS (23) – They’ve had a total of nine NCAA Tournament appearances, and a single Sweet 16 berth in 2001. The facilities were recently upgraded, but just about everything else ranks dead last in the SEC. It’s a tough job with little tradition and not enough support.

Where they win: “Great college campus and town with a big-time, new arena. The other good thing is the ceiling is low. They have only been to the NCAA tourney a few times.” – SEC head coach

The knock: “No history, small fanbase, and there’s not a ton of talent in the state. Also, the civil rights aspect is always a factor.” – SEC assistant coach

14. MISSISSIPPI STATE (18) – The Bulldogs have made the Sweet 16 on three occasions — in 1963, 1995 and 1996 — and went to the Final Four in 1996. Mississippi State has put out some pros, but the job ranks in the bottom two in the league in history, TV exposure, recruiting base, facilities, game atmosphere and budget.

Where they win: “I’m not sure where they win, but you win when you get on the plane to leave Starkville. Okay, fine — you want something good? The practice facility is big-time.” – SEC assistant coach

The knock: “It’s the worst town in the SEC, and there’s not even a close second.” – SEC assistant coach