Take a look at what we’re vibing on in the SEC as we hand out awards following the regular season.

One more game in the conference season, as Alabama takes on Florida in the SEC Championship this Saturday. It will be the last time Uncle Verne calls the CBS Game of the Week, so for many, it will be bittersweet. Lundquist’s voice has become synonymous with football Saturdays in the Southeast. Love him or despise him, when that wonderful music comes on at 3:30 p.m. ET and you settle in for another battle, it will feel different without him greeting you.

Lately, I have been vibing on some holiday music, specifically *NSync’s “Merry Christmas, Happy Holidays,” a classic, trying to lose weight after that big turkey dinner last Thursday, and distracting myself that another college football season is almost over and we have to wait another nine months before the greatest game on Earth comes back.

Yep, it is that time again, so let’s hand out some awards for the regular season of football in the latest edition of SEC Football Vibes. 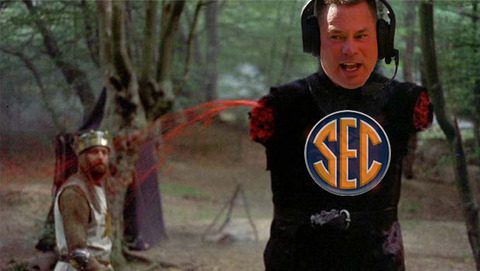 Weirdest Pronunciation of a Phrase

This goes to Butch Jones; as the way he says “Thank you” has become one of my favorite things of listening to the weekly SEC coaches teleconference. Seriously, listen.

It will never get old.

Jim McElwain is a little too happy sometimes that you just start to wonder what exactly he has been doing during his spare time.

Most Impactful Game of the Season

Auburn 19, LSU 13. Why? Because two head coaches’ paths went opposite ways in a half a second. If LSU snapped the ball before the play clock runs out and the touchdown counts, Les Miles is most likely still the head coach in Baton Rouge while Gus Malzahn would have likely been fired after a 1-3 start.

Game of the Year

Alabama 10, LSU 0. The Tigers came in with plenty of momentum after winning the first three games of Ed Orgeron’s interim tenure. Alabama would have none of that. The Crimson Tide and Tigers traded blows all game, and it wasn’t until the fourth quarter that Alabama was able to put 10 points on the board. Those 10 points might as well have been 50 against the Tide defense.

Play of the Year

Tennessee’s Hail Mary to beat Georgia. At the time, it seemed like a sign that this was going to be the Volunteers’ year. That didn’t happen.

The “Look, A Puppy With a Fluffy Tail!” Award

This honor goes to Dan Mullen for his appearance at SEC Media Days, when the Mississippi State head coach wore Adidas Yeezy Boost 750s in a desperate attempt to distract from the fact he allowed a player that was seen punching and kicking a woman to join his team. The move came one day after Mullen released a video of himself skurfing behind a boat – another sleight of hand attempt.

One of my favorite exchanges in the long illustrious history of “The Simpsons.”

This also goes to Mullen, who repeatedly threw his athletic director and university president under the bus for the Jeffrey Simmons’ decision.

The “I’m Not Dead” Award

Mark Stoops and Derek Mason: take a bow. The two coaches were as good as gone after a bad start, but look who is laughing now.

Let’s just say this: transcribing an interview with Ed Orgeron is not the easiest of tasks. (Side note: Roxanne is one of the top 10 movies of all-time. Fact.)

Ole Miss was supposed to be a contender in the SEC West this season, and Hugh Freeze spent all offseason telling everyone to focus on his team’s play on the field, not, you know, all of those violations he and the Rebels had committed off of the field. The Rebels will have a long time to think about everything after a season that fell apart, going 5-7, and missing out on a bowl game.

I am not going to beg, but Texas A&M has yet to respond to my request to become a honorary Yell Leader for a game next season. I know all the yells! Come on! Give me a chance! I, ummm, beg of you! (I lied. I am totally someone to beg.)

The “Our Pets Heads Are Falling Off” Award

To Missouri, who was … well … bad this season, and it was in large part to a defense that was as effective as Jeb Bush’s campaign (Jeb!). What happened to that Tigers defense that earned two SEC East titles and churned out the likes of Michael Sam and Shane Ray? Barry Odom has some answering to do.

Player of the Year

Alabama’s defensive lineman Jonathan Allen, who I swear could defeat ISIS by himself.

The “None Shall Pass” Award

To the Auburn offense when John Franklin III is in at quarterback. Hey, here’s an idea: maybe play a quarterback that you aren’t so afraid of him passing the ball that you run every play. I know, crazy idea, but think about it.

Coach of the Year

Sure, I’m going with an assistant, but this has to go to Florida defensive coordinator Jeff Collins, whose unit somehow overcame absolutely nothing from their offense and won the SEC East for the second straight year.

The “Today We’re Teaching Poodles How to Fly” Award

This goes to the worst idea of the year, which was the reporter asking Nick Saban if he expected there to be the competitive fire from his players during the SEC Championship game. Poor guy was at the receiving end of Saban’s ire, and that is not a place you want to be.

Poor Butch Jones. During a disaster of a season that saw multiple injuries, players transferring out of the program, and brutal losses to South Carolina and Vanderbilt, the Vols head coach said that his players were “champions of life.” I’m sure that trophy case will look great in the football offices.

The Most Overused Storyline

Hey, did you know South Carolina quarterback Jake Bentley should have been a senior in high school instead of starting under center for the Gamecocks? No? How is that even possible? It is the new “did you know Joshua Dobbs is an aerospace engineering major?” for storylines that will be told over and over. I do look forward to seeing Bentley and Georgia quarterback Jacob Eason battle over the next couple of years, though.

The “Why Don’t You Sit This Next One Out, Stop Talking for a While” Award

To former Auburn offensive coordinator Jack Crowe, who had this to say recently about the Tigers program.

“Auburn’s leadership cannot get past Pat Dye and allow any coach to have this (Alabama) kind of sovereignty. In his days Pat had it as good as coach Paul Bryant. Donald Watson planted the seed of Pat’s decline. And ever since then Auburn has turned “grey” into “black,” handcuffing and eventually compromising its coach. Gus Malzahn has been compromised. Following his early spectacular success began the erosion of his influence and now the scapegoating has begun to reign instead of leadership.”

That 9-15 record at Arkansas still irks you, don’t it Jackie boy?

The “You’re The Real MVP” Award

To all of you for continuing to read the Vibes all season long. Okay, maybe my group of loyal readers consists of just family members and friends, but if there are others out there, you are the best. Come visit! I’m still over on Briar.