Take a look at what we’re vibing on in the SEC, which includes asking if Les Miles has ever taken the knife out of his back that Ed Orgeron installed in September.

What gets griped about more: the preseason polls or the first few College Football Playoff rankings? As last week proved, the season is long and teams complaining about being ranked fifth or sixth should just focus on continuing to win and letting pieces fall into place. Well, unless you are 2004 Auburn, and you know that you are going to get screwed by the BCS.

I’ve been vibing on some leftover Sour Patch Zombie Kids lately, along with some Bone Thugs-n-Harmony (I miss my uncle Charles, y’all) and the fact that this time next week I will be face deep into some turkey, mashed potatoes with gravy, and stuffing until I can’t move anymore.

It is that time again, so meet me at The Crossroads, Look Into My Eyes because these are the Days of Our Livez as we thuggishly and ruggishly dive into the latest edition of SEC Football Vibes. 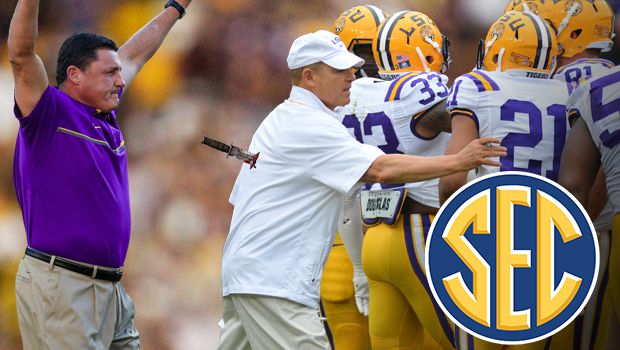 – It seems that Les Miles will be a head coach again soon, and whichever school hires him, its first priority should be to schedule a game against LSU in Baton Rouge. That way Miles can get one final standing ovation from the Bayou Bengals faithful like he deserves.

– When I get time, I’m going to write a book containing all of the coach-isms that I hear on the weekly SEC teleconference calls. Butch Jones would take up half of the book. He regularly uses “adversity,” “going 1-0,” “Team 120,” and, well, you get the idea. The book will be titled Teleconference Calls for Dummies: How To Overcome Adversity And Go 1-0 On The Week.

– Again with Miles, but has he ever taken out that knife that Ed Orgeron put into his back back in September? That must have hurt considering, you know, he gave Orgeron a job and everything. This is why good people can’t have nice things.

– Gus Malzahn finally lost a game while wearing a hat, so what is his next headwear that will bring luck? I suggest the classic Tam o’ shanter. He could say it is a tribute to the late Payne Stewart.

– This is basketball-related, but I have to get it off my chest: there is a reason that that Southern Illinois coach ranted about Arkansas fans not filling the arena when the Salukis played the Razorbacks. He is angry about having to live in Carbondale, Illinois. Have you ever been there? I have. My sister had her first kid there. There’s nothing to do besides hang out in the parking lot of the local grocery store. Playing in an SEC arena was the coach’s one shot at having fun on the sidelines. Sorry, buddy.

– Also basketball related, Kentucky assistant coach Tony Barbee still has me blocked on Twitter, and you know what? I am happy about it. Let’s all cross our fingers that, when Auburn comes to Rupp Arena this season, Barbee isn’t sent out on another “recruiting trip.” Forget John Calipari. All five-star recruits come to Kentucky to get a chance to play for the great Barbee.

– Back to football, and it seems that the majority of Kentucky fans I recently polled want Mark Stoops out as head coach. He’s taking them to a bowl this season, so I doubt it happens, but what else do Kentucky fans want? Bringing in an assistant who was “me first” in the offseason probably wasn’t a great call, though.

– Let’s face it: the SEC Championship Game is going to be a rout. That’s no fun. We need the East to get its crap together and field a team that would at least challenge the West representative. Hopefully soon.

– Now with the “administrative leave” of an Ole Miss athetlic department employee involved in the Laremy Tunsil scandal, how much longer do we think Hugh Freeze will be in Oxford? Can we get odds on whether he or Dan Mullen will be leaving the state first?

– Steve Spurrier is really biding his time until he goes on a 10-minute rant about Jim McElwain’s coaching, isn’t he? I can’t wait for that to happen because Florida fans were all, “Isn’t that cute that Spurrier is coming back to Gainesville as an ambassador?” I have said it before and will say it again: this will end badly.

– Finally, I was extremely upset this morning when after buying a Mountain Dew at 7-11 I opened it and accidentally dropped it on the ground. Some passerby immediately asked if I played wide receiver at Auburn.