Take a look at what we’re vibing on in the SEC, as we recount each team’s season to date in the form of gifs.

We here at Campus Insiders love to use gifs to describe how we feel at any particular moment. The right gif at the right time can bring humor to the day. It can ease the pain as we all bang our heads against the desk because some Power Five team has decided to play Northwestern East Louisiana State Tech and we’re forced by our unforgiving führer of a boss to do research on a team that we have no idea about, wondering why a school would schedule such a lousy opponent, all while fully realizing that we get paid to write about college football for a living and truly shouldn’t complain.

Wait, where was I?

Other than gifs, I’ve been vibing on the kindness of my coworker, Sam Falcone, who is always happy to get me a Pepsi from the vending machine, watching October playoff baseball, and reminding everyone that candy corn is by far the worst food to ever be invented.

It’s Thursday, which means it is that time again, so let’s take a look at how the first half of the season has gone for each SEC team in the latest edition of SEC Football Vibes. 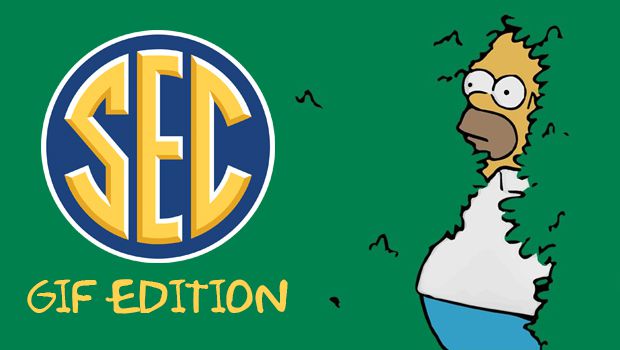 The season couldn’t have gotten off to a worse start, with two straight losses.

And Kentucky fans were thinking, “Not again.”

But at 3-3, Mark Stoops and the Wildcats are again dreaming of a bowl game.

The Tigers entered 2016 with such high hopes.

But it all came crashing down with two early losses, causing Les Miles to lose his job.

Now with Ed “Where’s The Weight Room?” Orgeron in charge, the Tigers are reenergized.

The Gators offense is still playing like its eight feet under water.

The defense, however, continues to eat up opponents.

During all of it, Jim McElwain remains as goofy as ever.

The Bulldogs offseason was a little controversial, but Dan Mullen remained optimistic.

A loss to South Alabama got the season off to a rough start.

Life after Dak Prescott has been a bit rough for the Bulldogs, it is safe to say.

The season almost started off as a disaster, but the Volunteers escaped an upset bid by Appalachian State.

Then a Hail Mary to beat Georgia seemed to make Tennessee a team of destiny.

After starting 1-2 with an offense nowhere to be seen, Auburn fans were broken.

So what would Gus Malzahn do with everything on the line?

He reliquished play-calling duties, and now the Tigers are on a roll!

A new coach, a new beginning in Athens.

A win against UNC started the Kirby Smart era with a bang.

Losses to Ole Miss, Tennessee, and (ouch) Vanderbilt have taken some of the bloom off of the season.

Hugh Freeze accepted his role as a bad boy entering the season.

The first half of games has had Rebels fans like …

… while the second half has been a different story.

Barry Odom took over the reins from Gary Pinkel, as SEC fans all asked the same question.

Odom has a rough job ahead of him to get Missouri back to being a SEC contender.

Bret Bielema entered the season with all the confidence in the world.

Losses to Texas A&M and Alabama set the Hogs back.

But a huge win against Ole Miss has the Razorbacks back in the picture.

The offense has been unbearable to watch.

Vanderbilt fans have been searching for other things to occupy their time.

But that win against Georgia proved that Derek Mason still has some muscle left.

Trevor Knight came to College Station as the new hotshot in town.

And proved to be exactly what the Aggies needed.

A 6-0 record and No. 6 ranking heading into the Alabama game has Texas A&M like…

The Gamecocks made a bold move in hiring Will Muschamp.

Muschamp has had a little trouble winning games so far.

Athletic director Ray Tanner might be questioning his decision.

All the talk was about how young and inexperienced the Crimson Tide would be.

And Alabama is crushing the rest of the SEC.