SEC Football Vibes: What Is Les Miles Doing With All The Free Time?

Take a look at what we’re vibing on in the SEC, including wondering what Les Miles is doing with all of his free time and debating which head coach would I do a body shot off of.

In German, my last name means someone with long legs or a crutch. That’s absolutely appropriate, considering the past few weeks as I have been on crutches. (My 5’9 frame doesn’t really fit the long leg part of it.) Why do I bring this up? Well, I haven’t been to Deutschland in a few years and it’s about time that I make a trip back for some bier, bratwurst, and time with some Freunde. Hopefully after football season. I need to brush up on my Deutsch beforehand.

I’ve been really vibing on some ABBA lately, so the news that they are reuniting makes me extremely happy. If I were a college football team and really wanted to get under the opposition’s skin, I would have the Mamma Mia soundtrack blasting outside of their locker room the entire pregame.

It is that time again, so take a chance on me, as the winner takes it all, and gimme gimme gimme some attention while reading the latest edition of SEC Football Vibes. 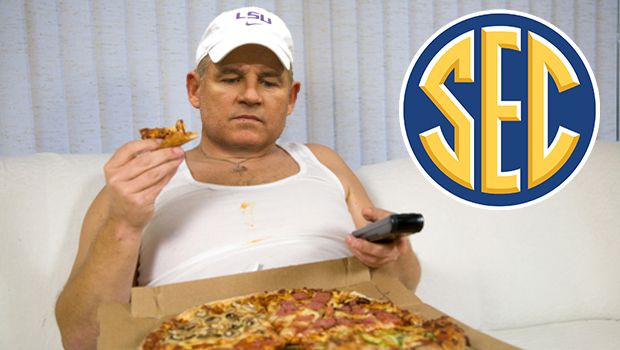 – I have to get this off my chest: I’m not sure why Auburn running back coach Tim Horton blocked me on Twitter. I have done nothing but praise the guy for his coaching abilities and him as a man. Did he accidentally block me? Did he get sick of the donut and coffee jokes? I’m perplexed. If anyone reading this knows him, please tweet him and tell him that I still love him and that he should definitely unblock me.

– We seriously need an update on what Les Miles is doing with all of this free time away from coaching. Not only am I worried for the guy, but I’m curious about the shenanigans he has been able to get himself into. Is he playing Mr. Mom (underrated movie) and carpooling his kids and their friends around? Has he turned into Unemployed Les, where he starts drinking at 9 a.m. and finds himself yelling at the dumb contestants on The Price Is Right because, seriously, who thinks a waffle iron costs that much? Does he want to spend some of his buyout money on a ticket to Game 3 of the World Series for me? These are all questions we need to find out.

– I’m very much looking forward to seeing how LSU defensive back Dwayne Thomas plays next week against Alabama following his comments about how the Tigers are going to dominate the Crimson Tide. I’m sure the Tide will not use that as motivation at all.

– A lot of us in this office are lifelong Chicago Cubs fans (and some others have joined the bandwagon), so the playoff run has been a constant piece of conversation. Today, we discussed which Cubs player/coach/front office personnel we would take a body shot off of if the Cubs were to win the World Series. I’m going with either Jake Arrieta or Joe Maddon. As for SEC head coaches, that answer has Dan Mullen written all over it.

– It is interesting to listen to some of the SEC coaches on the weekly teleconference, but it is absolutely amazing when Jim McElwain comes on because there is always a chance that he is going to make a joke that either falls flat or makes no sense at all.

– Speaking of coaches speaking, I love the obligatory “media over laughing when a coach makes a joke” moment during press conferences. The room suddenly becomes the Apollo Theater with Chris Rock in his prime when normally conservative coaches such as Nick Saban or Gus Malzahn make a little wise crack.

– I’m single and am off on the weekends, so most of my Saturdays during the fall are spent either on the couch or at a bar watching college football. I feel sorry for guys that don’t get that opportunity, as I couldn’t imagine missing a big game because my better half wants to go apple picking (hi, Erik Czupryn!) or shopping or to anywhere that doesn’t have 20 TVs with every possible game on. This is reason No. 353,972 why my longest relationship has lasted about a week.

– Finally, let’s all put our loyalties aside and agree on one specific thing that could help this entire country, nay, world comes together and unite like never before: banning the use of the word “nation” when describing a fan base.