SEC football predictions and storylines for the 2017, as the East looks to find its footing. Meanwhile, a reloaded West Division will try to knock Alabama from its throne.

The 2016 season was a down year in many ways for SEC football: lack of consistent quarterback play, a 6-7 bowl record, and, for the third time in four seasons, no national championship by a conference team.

This is the SEC, though, and it will not stay down for long. Along with Alabama, teams such as Auburn, Georgia, and LSU are expected to be contenders for the national title in 2017 while Florida looks to win the SEC East for the third straight season.

Let’s take a look at an important storyline heading into next season for each team.

Putting The O In Florida – Despite winning the SEC East in his first two seasons in Gainesville, the mood around the Gators program seems to be this: that’s great, but we expect more. That more won’t happen until Florida finds an offense that can put pressure on opposing defenses.

Settling on a quarterback, likely redshirt freshman Feleipe Franks, would help, but the Gators are in desperate need of someone who can consistently stretch the field and use the talented wide receiver corps. If McElwain doesn’t find an answer, a young defense might not be able to overcome and carry the Gators to Atlanta again, as the SEC East will be much improved in 2017.

High Expectations – After taking over for Mark Richt as head coach in Athens, Kirby Smart was given a year where nothing spectacular was expected of the Bulldogs. That changes immediately, as both Nick Chubb and Sony Michel come back at running back and quarterback Jacob Eason has a year under his belt.

Richt was highly criticized for his inability to meet expectations during his tenure, and now we get to see how Smart handles it as a head coach. The Dawgs will be favorites in the SEC East, but as the UGA faithful know, that doesn’t always turn into a division title.

Taking Next Step – Mark Stoops got the proverbial monkey off his back with a trip to a bowl game in his fourth season, and the Wildcats, despite the bad outing against Georgia Tech in the TaxSlayer Bowl, caught some momentum near the end of the season with the win against Louisville.

Now, Stoops and the Wildcats need to take it to another level. A dark horse to win the SEC East in 2017, Kentucky will lean on running back Benny Snell Jr., who was solid as a freshman. There will be a quarterback competition between Drew Barker, who started the season before being injured, and Stephen Johnson, who filled in admirably.

While fan expectations aren’t as high in Lexington as other conference schools, this is a season where Stoops cannot fail. Can he get the Wildcats to their first SEC Championship Game? We shall see.

Recovering From Disaster, Part I – Missouri was flat out awful this past season, going 4-8 in Barry Odom’s first season in charge. A lot of that stemmed from a defense that finished No. 118 in the nation by allowing 479.7 yards per game. When the Tigers won back-to-back SEC East divisional titles, they had a nasty defense.

The bad news for Mizzou? Odom was the defensive coordinator during those years, and it seemed that moving to head coach overwhelmed him at times in the season. If he can’t get the program heading in the right direction – the Tigers have gone from 11 wins in 2014 to just nine in the last two seasons combined – there could be talk that Odom is not ready to be in charge of a major program.

A schedule that opens with Missouri State, South Carolina, and Purdue, all at Faurot Field, could give Odom a chance to get his and his team’s feet wet before facing tougher opposition.

What’s Next? – The Gamecocks exceeded expectations in Will Muschamp’s first season as head coach, making a bowl game and coming close to defeated South Florida in the Birmingham Bowl. Now, the question is where do they go from here with a very young offense.

Both the quarterback and running back positions seem to be set after freshman Jake Bentley took over the job under center halfway through the year and fellow rookie Rico Dowdle led the Gamecocks in rushing with 764 yards and six touchdowns. The top three receivers for South Carolina – Deebo Samuel, Hayden Hurst, and Bryan Edwards – were all underclassmen and should improve with the much-needed experience.

If offensive coordinator Kurt Roper can get the best out of these youngsters, the Gamecocks could be extremely potent with the ball.

Last Season for Jones – After a season where Tennessee was the favorite to win the East and then nothing went right, Butch Jones finds himself on the hot seat and having to find a starting quarterback for the first time in 3-plus years. Defensive end Derek Barnett is gone as well, and, as of post, the search for a new offensive coordinator continues. Combine that with a tough schedule – Georgia Tech in Atlanta, at Florida, at Alabama – and it all adds up to Jones being dismissed from Knoxville by season’s end.

Webb Returning – While quarterback Kyle Shurmur became a better passer as the year went along, the Commodores’ offense is at its best when running back Ralph Webb is rolling. The news that he is coming back will make Vanderbilt a hot pick to contend next season, and means he could cement his place as one of the best backs in a deep SEC crop. Already owning Vanderbilt’s single-season and career rushing record, Webb needs just eight touchdowns to tie Zac Stacy at 30 for the all-time lead. If he is healthy, expect that record to belong to him. 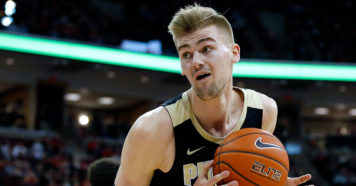