Taking a look at what we are vibing on as we quiz you on each conference head coach in the latest edition of SEC Football Vibes.

The long months of no SEC football are, sadly, upon us. But as promised, the Vibes will not be going away. After all, January has been designated the Celebration of Life month.

So, we have a long offseason of nothing but you and me just sitting here, staring at each other while, in the distance, fight songs go through our heads and we try to get through it together. I can vibe on that. I feel your good vibes coming to me as I sit here pondering the struggles of the conference this past season. I feel your pain.

How much do you really know about the head coaches of the SEC though? Think you could pick out a fact about each one mixed in with two fake ones? To celebrate the lives of the 14 men in charge of conference programs, I now give you your chance to flex your mental acuity as we quiz you in the latest edition of SEC Football Vibes. 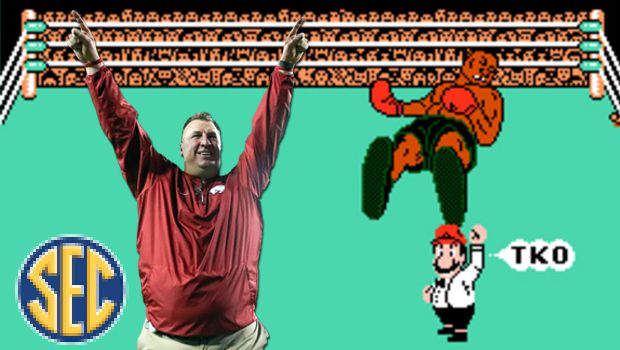 A. He owns a Waffle House in Hughes, Arkansas, where he got his start coaching football at the local high school.

B. He and his wife Kristi have a gospel rock band named No Huddle Heaven.

A. At Eastern Washington, his roommate was Colin Cowherd.

B. Spent time at a Dutch culinary school learning how to make poffertjes and wentelteefjes to impress his girlfriend at the time.

C. Claims he once talked to Cleopatra during an acid trip while attending Burning Man.

A. Only eats strawberries when the stem has been properly removed.

B. Did not originally plan on being a coach.

C. Was an excellent amateur gymnast, specializing on the pommel horse.

A. Once met with Mother Teresa only to tell her she needed to clean up her life according to the Lord.

B. Has been to Russia on a missionary trip.

C. Refused to appear in The Blind Side unless Sandra Bullock promised to give him her Oscar.

A. Was a water skier at Cypress Gardens growing up.

B. Ran the Boston Marathon this past April.

A. Gives his wife’s chip dip to two players each week.

B. Listens to the Annie soundtrack before each game to calm his nerves.

C. Credits The Brady Bunch for teaching him things such as how to share a bathroom with other people and all of the puns that can be made at a deli when asking for meat.

A. Once had a phone bill totaling $5,347 after continually calling Miss Cleo “just to chat.”

B. Still has a Zune.

C. Once broke his finger while coaching a game.

A. First job was as a graduate assistant at Washington State.

B. Left the Heaven’s Gate cult due to philosophical differences: mostly that he is an Adidas guy and refuses to wear Nike.

C. Once got lost in a Home Depot while looking for a circular saw.

A. Lists “defeating Mike Tyson in Punch-Out” on his resume under Awards and Accomplishments.

C. Plays only the nickel slots at the Borgata during trips to Atlantic City.

A. Was the key graphic designer for the new Los Angeles Chargers logo.

B. There’s a provision in his contract that includes the tone of his public statements.

C. Has never been north of Columbia, MO.

A. Has attended 79 Siegfried and Roy shows in order to learn how to take down a tiger if attacked.

B. Considers James Buchanan the greatest President in US history.

C. Has a losing record as a head coach.

A. Is the youngest of four brothers.

B. Has seen all 25 episodes of The Chevy Chase Show.

C. Conceived his first child while wearing a head set.

A. Stays in shape through a workout regimen perfected by the KGB.

B. Was a four-time member of the SEC Academic Honor Roll.

A. Played cornerback at Northern Arizona.

B. Suffers from consecotaleophobia, the fear of chopsticks.

C. Describes his perfect vacation as, “a camping trek in Colorado while recreating scenes from Red Dawn.”