Take a look at what we are vibing on in SEC football as I put in my application to become the conference’s ambassador to Germany.

Walls are all the rage nowadays. The new President wants to build one. Nick Saban might erect one to prevent any other assistants from leaving. New Orleans high school coaches have contemplated putting up a metaphorical wall against LSU and Ed Orgeron. Butch Jones should have a wall by now after all the bricks he has been laying.

So, yeah, walls. It is no coincidence that I bring this up while writing from a city that knows quite a few things about walls: Berlin. I’m still vibing (and thriving) in Deutschland, rocking the lederhosen while knocking down some schnitzel and bier. It has been a great trip so far.

It is that time again, so let’s all grab our Fräuleins, stay away from the Bavarian meatloaf on the menu (sorry, Michele), and start rocking to some David Hasselhoff as wir tauchen ein the latest edition of SEC Football Vibes. 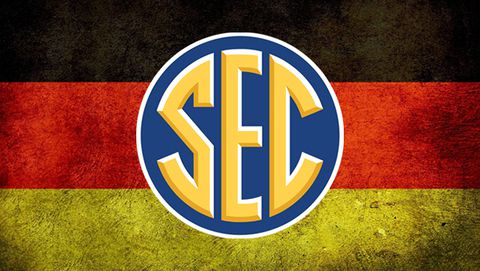 – It’s only a matter of time before coaches start scouring Europe for undiscovered talent, so here is my proposal to the wonderful Greg Sankey: make me the SEC ambassador to Germany. It all makes sense. I know the country fairly well, have connections and can speak the language a little bit, and, come on, could you possibly think of someone who would spread the word of our great conference better than me?

It is an easy (and smart) move. I’m willing to uproot my family (I have neither a spouse nor kids) and knock on every German door speaking on behalf of you and the league. Let’s make this happen. I’ll await your call.

– It surprises me that Scott Fountain, Auburn’s tight end and special teams coach, was dismissed only in the fact that if you have watched Auburn the past four years, it would shock you that Gus Malzahn realizes what a tight end is.

– On the same note, it was a bad look on Malzahn’s part for two reasons: Fountain was the Tigers’ top recruiter, and the dismissal came less than a week after signing day. Great job getting a Top 10 class for us, Coach. You’re fired.

– Is the train wreck of Ed Orgeron being the head coach at LSU already beginning? With each move he makes, the hiring seems more and more insane. How do you lose the confidence of the high school coaches in New Orleans? And how do you let Dameyune Craig, possibly the top recruiter in the nation, go? Insanity at its finest. This is going to be fun.

– Having attended 13 of the 14 SEC stadiums for games (I’m coming, Mizzou!), it is safe to say that I have witnessed some great atmospheres. European soccer matches match the intensity of an SEC environment. I took in the Hamburg-Bayer Leverkusen match this past Friday and, well, it was electric. While the stadiums aren’t nearly as big as those in the conference, the noise never stops. If you ever get a chance, take one in. You will love it. Oh, and my Hamburg side won. Boom!

– It is probably a good thing we all tend to stick to light beer while tailgating for endless hours before kickoffs, as the German bier will knock you off of your feet. I always forget this when traveling, but quickly remember after the first few I imbibe in. Also, I have yet to see Fireball over here, which is excellent for all those around me.

– The more and more I think about it, I talk myself into the fact that Kentucky could seriously win the SEC East this upcoming season. Of course, that line of thinking might have to do with the aforementioned German beers. I like this Wildcats team, though.

– I’m looking forward to seeing the quarterback position being a strong point of the SEC again. This past year was downright awful, but look at what is coming in 2017: Jalen Hurts, Jacob Eason, Jake Bentley, and Shea Patterson all have experience now after playing as freshmen, Nick Fitzgerald should (maybe) have more help around him, and Jarrett Stidham will be at Auburn. That immediately makes the offenses better.

– I have received four “War Eagle” greetings in a week in the Fatherland. That’s pretty good, I would think. (Note: I’m wearing my Auburn beanie hat around as it is cold.)

– Germans are really into the 1980s, which should make it a welcoming place for all Georgia fans as they like to pretend it is 1980 all the time! Ich scherze nur, Dawgs fans. Ich liebe dich.