Take a look at what we’re vibing on in the SEC, including making comparisons to current situations in the conference because that is the new trend.

Today, I am bringing you an extra special edition of vibing from the Chili’s Too in Terminal 3 of Chicago O’Hare International Airport. Yes, try to calm yourself as the excitement builds as the fajitas come out sizzling and the smell of meat fills the bar area.

The reason I am at the airport? I’m traveling to Lexington to watch the Kentucky Wildcats play in their spring game, so for the next 72 hours (after I leave this wonderful Chili’s Too, obviously), I’m vibing on nothing but the three B’s: bluegrass, bourbon, and betting on horses. What a town!

Yes, as you can tell, it is that time again, so start picking out your favorite mare’s name, save a few extra bucks for a Pappy Van Winkle, and let’s get this unlimited chips and salsa party started in the latest edition of SEC Football Vibes. 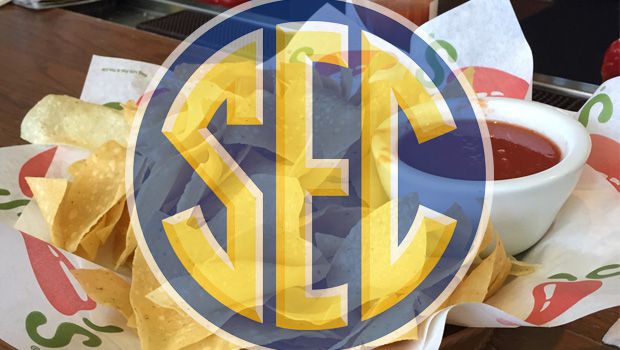 – Speaking of the unlimited chips and salsa that I enjoy each trip to the airport no matter what time it is, the SEC is a lot like that tasty goodness: it comes at you as much as you want, and you have to enjoy every second of it. Look at this goodness! Who could pass this up? That’s like passing up a free ticket to the Iron Bowl!

– As you can tell, I am full of making comparisons right now because that seems like the trend for the week. First, we had Sean Spicer comparing, well, just look it up. Then, Hugh Freeze compared Easter Sunday to the Super Bowl. I’m not sure how that analogy works, but I’m just going to take Freeze’s word on it. Does that mean we all get candy???

– I’m not condoning Bennie Braswell III for getting a little payback sometime on his teammate Jonathan Abrams, who laid Braswell out with a nasty, and dirty, hit during the Mississippi State spring game, but, as Chris Rock would say, “I would understand.”

– Jarrett Stidham played extremely well in Auburn’s spring game, but let’s not forget: so did Jeremy Johnson two years ago. We all remember how that turned out.

– Speaking of quarterbacks, I’m looking forward to seeing some competition between Drew Barker and Stephen Johnson tomorrow night. Johnson seems to have a handle on the starting position, but you never know what could happen if Barker were to play well.

– Contrary to rumors, I am NOT going to wear a “Leave John Higgins Alone!” shirt while in Lexington.

– Not really football related, but it does have to do with the SEC, and here it is: David Ross has been over-publicized. Sigh. There, I said it. It kills me to admit it, especially as both an Auburn alumnus and a Cubs fan, but his appearances seemingly everywhere are getting a bit old. I love Ross to death, but if I see him on one more show, I might throw something at the television.

– My friend Frank took his daughter on a campus visit to Alabama recently, and he was blown away. In fact, his daughter has decided to attend school there starting in the fall. He has already started using the term “we” when speaking of the football team, and is planning on somehow sitting next to me at the next Iron Bowl. That will be the day that one of us kills the other.

– What is with some of the conference coaches and those Yeezy shoes? I had to look them up just to know that they are made by Kanye West. Really? You are wearing a shoe made by a rapper? That would be like wearing a shoe because a famous football or basketball player wears … oh wait, that comparison does make sense.