Take a look at what we’re vibing on in the SEC as we recap the conference’s bowl season with quotes from the iconic show Friends.

One of my resolutions for this new year is to be nicer to coaches in my weekly column … starting after this one. After all, they are human, and have parents and spouses and kids and … well … you get the point.

Sure, we will have our differences every now and then, but in the long run, all of us have one goal, and that is to live peacefully among each other as we navigate through this crazy macrocosm we call SEC football.

I’ve been vibing on the pleasantness that was the 1990s lately, back when the Internet was just a new fad, I was just a teenager (not the cynical mad man I am today), and the biggest question on everyone’s mind was whether the filthy, up-to-no-good Ross Geller would ever ask Rachel Green out on a date even though she would never date a two-timing paleontologist.

Yes, Friends is on my mind as we wrap up football season. With one more game remaining, let’s take a look at back at the SEC bowl season with a little help from the gang at Central Perk in the latest edition of SEC Football Vibes. 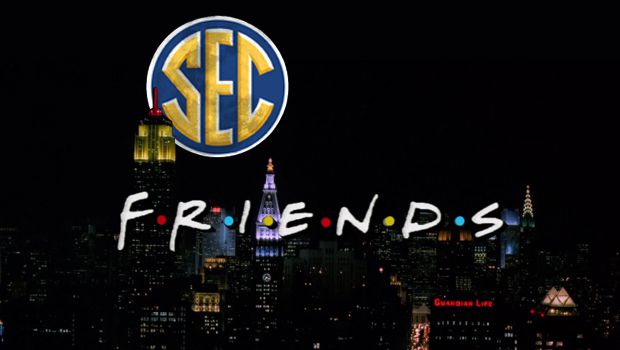 Chandler: [watching TV] I think this is the episode of Three’s Company where there’s some kind of misunderstanding.

The Alabama offense was not its usual self in the win against Washington, with quarterback Jalen Hurts looking confused at times and Nick Saban … he’s obviously not a guy that is fond of misunderstandings.

Roger: Siblings. You fail at something so your sibling will look better in the eyes of your parents.

After a great end of the season, Kentucky’s Mark Stoops ended up taking it on the chin in the TaxSlayer Bowl against Georgia Tech, while his brother Bob was looking good in Oklahoma’s win against Auburn.

Alabama players might want to watch out for some of the “touching” Clemson players have a habit of doing.

Phoebe: Okay, y’know there’s a lot of things I don’t believe in, but that doesn’t mean that they aren’t true. Like … the Bermuda Triangle. Or crop circles. Or evolution.

Auburn’s defense sure didn’t believe in tackling any Sooners.

Phoebe: I’m just gonna pass on the concert, ’cause I’m just not in a very Hootie place right now.

It might take a while for Will Muschamp to be happy enough to invite his, I’m sure, great friend Darius Rucker over for a jam session after giving up 46 points to USF in the Birmingham Bowl.

Joey: It’s a known fact that women love babies, all right? Women love guys who love babies. It’s that whole sensitive thing. Quick, aim him at that pack of babes over there.

Congrats to Bret Bielema. That new baby will hopefully help Razorback fans forget the choke job that their team performed in the bowl loss to Virginia Tech.

Chandler: What is it about me? Is it my hair?
Rachel: Yes, it’s exactly that, Chandler. It’s your hair.

Saban went with the light blonde look for the Peach Bowl.

Monica: Chandler, I’m unemployed and in dire need of a project. You wanna work out? I can remake you.
Chandler: Oh, you know, I would, but that might get in the way of my lying-around time.

Poor Missouri and Ole Miss had to spend the bowl season at home.

Chandler: All right, check out this bad boy. Twelve megabytes of RAM, 500 megabyte hard drive. Built-in spreadsheet capabilities and a modem that transmits at over 28,000 BPS.
Phoebe: Wow. What are you gonna use it for?
Chandler: Games and stuff.

This quote shows you how long ago the show was on the air, and how far we have come in technology. Those new digital down markers, designed by Auburn equipment manager Dana Marquez, were seen everywhere during the bowl season.

Chandler: Oh, I know. This must be so hard. “Oh, no! Two women love me. They’re both gorgeous and sexy. My wallet’s too small for my fifties, and my diamond shoes are too tight!”

Life could not be better for Ed Orgeron right now.

Mrs. Green: Oh, this is so much fun, just the girls! Do you know what we should do? Does anybody have any marijuana?
Monica: All right, look. Nobody is smoking any pot around all this food!

I hope Jim McElwain got his much-deserved free Bloomin’ Onion at Outback as a reward for beating Iowa.

Chandler: Are you actually saying these words?

Joey: [referring to the guy that just robbed them] You know what I’m going to do next time I see that guy?
Chandler: Bend over?!

Vanderbilt didn’t put up much of a fight against NC State, did they?

This aptly describes Legion Field in its current state.

Phoebe: You know I’ll be giving them the greatest gift ever.
Chandler: You’re going to carry their baby and buy them a Sony PlayStation?

No PlayStation or baby for Gus Malzahn, but I’m sure he would prefer the gift of having Jarrett Stidham at quarterback next season.

Joey: You know, I think that went well.
Chandler: It could’ve been worse; he could have shot her.

Once again, what was Musburger thinking?

Phoebe: [to beeping fire alarm] WHAT DO YOU WANT FROM ME?

Tennessee fans are the fire alarm, and despite another bowl win, Butch Jones is Phoebe. A Music City Bowl win is not going to shut up the critics, Butch.

Ross: Mona, I love you.
Mona: Awwh! And I love spending time with you!

Dan Mullen’s response to Mississippi State fans who ask if he will be their coach for a long time.

Joey: Do you have a bobby pin?
Chandler: Yeah. Oh, wait, I’m not a 9-year-old girl.
Joey: Then why do you throw like one?

So much bad quarterback play in the conference this season.

Kirby Smart ended the season with a bowl win and is putting together an excellent recruiting class. Good times ahead in Athens.

If Kevin Sumlin doesn’t improve next season, he might be looking for a new job in a place like Tulsa.

Signing day is just a few week away, recruits!

I’ll be here every Thursday.

MORE: Livin’ B1G And Bowling In The Gutters