Take a look what we are vibing on in SEC football including a buddy/cop movie teaming Gus Malzahn and Hugh Freeze as part of the police force.

We are in the middle of the February doldrums, with spring practice still a couple of weeks away and the only thing to watch on television at night is the ongoing soap opera that is the Alabama coaching staff. What is exactly going on there? I have seen episodes of Dynasty with fewer plot twists.

To beat the boredom of the middle of February, I’ve been vibing on some Couch to 5K app action on the treadmill, reintroducing myself to the soreness that comes from lifting weights, and enjoying replays of Jim Fyffe’s top 35 calls during his long career as the voice of the Auburn Tigers. Gives me chills every time.

It is that time again, so grab some Biofreeze for the aching muscles, start dreaming of hearing those beautiful pads cracking against each other, and let’s all get through the rest of February together with the latest edition of SEC Football Vibes. 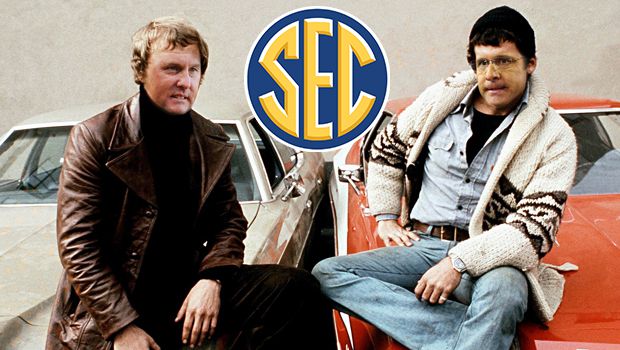 – Let’s just go ahead and get this out of the way: Nick Saban could not give a flying [redacted] what a high school like David Feaster thinks about him or the way he handles recruiting. I imagine Saban hearing a little bit about the coach’s so-called “ban” and just maniacally laughing while rubbing his fingers together. This, all while another 10 5-star athletes are paraded into his office during a recruiting visit. Saban flosses his teeth with coaches like this.

– Here’s a proposal for Gus Malzahn and Hugh Freeze: a buddy/cop movie. But unlike the usual flicks where one is a good guy and the other is a bad guy, both are such good guys that they are unable to do their jobs.

A quick plot: a serial killer is on the loose, and when Gus and Hugh (those just sound like cop names) finally catch him, the killer convinces the duo that he’s extremely sorry and has found religion, so they let him off. When the guy goes on to kill three more people, Gus and Hugh are called into the commissioner’s office (played by Gene Stallings), where he curses the pair out saying, “Damn it, boys. This is the fourth time this has happened this month. What is going through your damn heads?”

The episode ends with Gus and Hugh looking at each other with smirks on their faces and shrugging their shoulders.

Give me credit. This is better than half the crap that is on television right now.

– It bewilders me that Vanderbilt is not holding its annual Black & Gold Game this spring. It makes no sense. Does Derek Mason think his Commodores get too much publicity and don’t need any more press? They are still playing a scrimmage and inviting fans, but they are the only conference team not to have a spring game broadcast live on television.

– I’m in the midst of growing a beard (okay, let’s face it: I was lazy and didn’t shave during my two-week vacation), but it got me thinking of which head coach would look the best with a beard and the one that would look the strangest. Somehow, both answers came back to Ed Orgeron. He needs to grow a beard, start wearing just camouflage overalls, and commence dipping.

– This idea might not go over too well with Auburn fans, but I have an idea: just put up two huge fake trees at Toomer’s Corner. I know, it is against tradition and it is complete outrageous that the school has had to replace two sets of trees now after idiotic acts, but we put up fake trees at Christmas, and the city of Houston is nothing but fake trees. Why not just get ahead of the curve? What is there to lose? You can still roll them after victories, and they will still look majestic and welcome you to the campus.

– Still waiting on my appointment as the SEC ambassador to the wonderful country of Germany. Let’s expedite this, people. I haven’t enjoyed a good schnitzel in five days.

– Steve Spurrier just gets closer and closer to that place where he will be a distraction for Jim McElwain by commenting on the football team. I predicted this marriage will end badly for one of them, and the Gators won’t be getting rid of Spurrier anytime soon.

– One of the things I thoroughly enjoy is when a football coach joins the student section at a basketball game and tries to pump up the crowd. Nothing beats seeing them stand in the front row with the same shirt on as the rest of the students, jumping up and down and acting like their minds are on the action on the court and not on, I don’t know, the thousands of responsibilities that a head football coach has at all times. You just know the basketball coach is thinking, “Crap. Now I have to paint my chest for a football game.”

– You know what, let’s go ahead and rank each coach by how likely they are to show up in the student section during March Madness with a big school logo painted on them.

12. Hugh Freeze – A man who should never show his bare chest.

11. Will Muschamp – Wouldn’t show up shirtless, but would wind up that way after getting angry about a call.

10. Kevin Sumlin – Only if Tom Herman did the same thing at Texas.

6. Dan Mullen – Would then tweet at Jim Harbaugh that he did it.

4. Jim McElwain – Wandered in from a Jimmy Buffett conference.

3. Barry Odom – Arrested midway through first half by police thinking he is some random nut.

2. Butch Jones – Desperate to get any good press.