Take a look at what we’re vibing on in the SEC, including listing the pros and cons for some potential candidates to join the conference when expansion occurs.

It’s inevitable that sometime in the future, the SEC will again expand and add two or more teams to the greatest conference in college sports. It seems like yesterday that there were only 10, and then BAM … South Carolina and Arkansas joined in 1992 followed by Texas A&M and Missouri in 2012.

Personally, I am not a fan of expansion. When there are too many teams, the comfortability and familiarity within the conference goes out the window. I still have no idea what Missouri’s fight song sounds like, and I pride myself on knowing the tune to each SEC battle tune. Guess I should really give in and learn it since it has been five years.

Anyway, since change happens, and we fans of the SEC will be welcoming new schools sooner than later, I’m vibing on the pros and cons of potential candidates that we shall deem worthy of our company and save them from joining a lesser conference. Yes, it is that time, so let’s expand our brains for the latest edition of SEC Football Vibes. 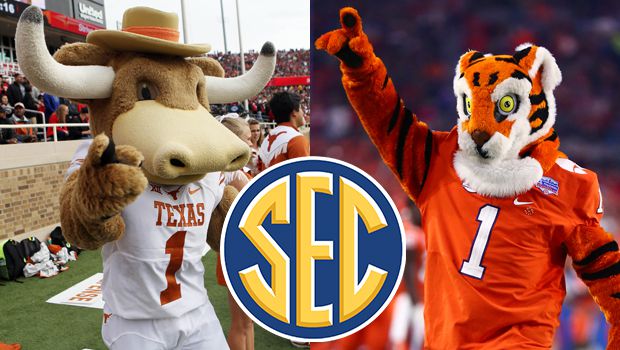 Pros: Located in Atlanta, where half of all SEC alumni live at least once in their lives. Brings strong academics, and easy road trips for away games.

Cons: Left the holy land of the conference in 1964. Traitors.

Pros: Football is king. Already has a rivalry with Florida and, to a lesser degree, Auburn from some amazing games back in the 80s.

Cons: We already have Rocky Top as the go-to joke for things that get old after five minutes. We don’t need the Tomahawk Chop.

Pros: Solid football program that has a good following. Would help expand a little bit to the north instead of more south or west. Lane Stadium is a great environment.

Cons: Have you met Hokie fans? They think they invented the game despite just appearing on the scene in the 1980s. Imagine how pompous they would be if they were to join the elite of elite in the SEC.

Pros: OH MY GOD, this would totally blow the college sports world out of its mind. The richest athletics program joining the richest conference? According to some haters, we are already annoying enough as it is. Add in the Longhorns, and that level will be taken to 11. Also, the Texas-Texas A&M rivalry would resume.

Pros: Bob Stoops would finally be forced to get over his vendetta against the conference. We could possibly see a Stoops vs. Stoops matchup. The Sooners have a great tradition in a lot of sports.

Cons: That damn fight song. Oh, and the fact that Oklahoma is not in the Southeastern part of the United States. (Neither is Missouri, I know, but we will overlook that.)

Pros: Culturally rich town that … okay, this is just going back to me trying to become the SEC Ambassador to Germany. Wann wird das passieren, Herr Kommissar Sankey?

Pros: Makes the most sense of almost any team. Looks and feels like a SEC school, specifically Auburn. Great football and baseball.

Cons: Too many Tigers. We already have Auburn, LSU, and Missouri. Also, Dabo Swinney is basically Hugh Freeze with championships. We don’t need another Joel Osteen dressed as a head coach preaching at us.

Pros: The city of Miami.

Cons: The city of Miami.

Pros: Gives Kentucky a bigger rival in-conference than Tennessee. UofL and UK already hate each other. Now imagine if they were playing for conference championships.

Cons: Do we really want Bobby Petrino back?