Take a look at what we’re vibing on in the SEC, including the use of search firms when hiring coaches and wondering why Bret Bielema still has me blocked on Twitter.

I got a little serious on you, the readers, last week, and for that, I apologize. It doesn’t happen often, but sometimes you have to let the feelings go. I’ll try to give you a warning next time I feel one of those moments coming on, but to be honest, they just appear out of the blue. Let’s get back to the amusement, shall we?

Lately, I have been vibing on some episodes of The Simpsons from the 1990s, when the show was great, along with figuring out why Dr. Phil is still (or ever was) on television, and determining that I would have been the worst contestant to ever appear on Win, Lose, or Draw.

It is that time again, so let’s all embiggen our way to another perfectly cromulent group of thoughts in the latest edition of SEC Football Vibes. 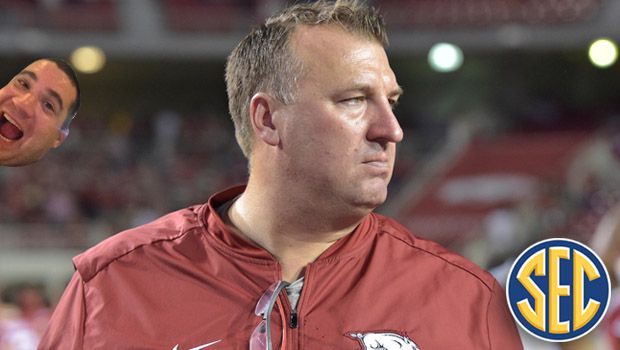 – I had a good chat over the phone with Bret Bielema earlier this week. He’s personable and downright charming, but he STILL has me blocked on Twitter. Come on, Bret! We bonded, buddy! This will be fixed by the end of spring practice, I promise you.

– I often wonder about the best SEC tradition that the majority of people don’t know about, and brought it up recently with some friends in a group text. My answer is that Reveille is the highest-ranking member of the Texas A&M Corps of Cadets, and that freshman cadets have to address her as “Miss Rev, ma’am.” One buddy went with the fact that Rocky Top isn’t Tennessee’s official fight song, but that “Down the Field” is. Another went with Florida’s Mr. Two Bits, which I argued was too well-known for the list. Everyone in this group text needs a life.

– I have a major beef, and it has to do with coaches all of a sudden acquiring Southern accents when they take a job in the SEC even if they are from north of the Mason-Dixon Line. I recently heard new UT defensive coordinator Brady Hoke speak and you could have sworn he was born and bred in Tennessee. Nope, he is from Dayton, OH and has spent all of his time in the North or on the West Coast. Okay, I might be crazy, but I swear this happens, and not just in the SEC. Bob Stoops sounds like a good ole boy from Lawton, Oklahoma.

– Speaking of things from north of SEC territory, the University of Wisconsin has been bragging about its football and men’s basketball team combining to make a bowl game and NCAA Tournament during the past 15 years. Congrats, Badgers. You know how many championships have come out of that? Zero. Absolutely none. Null. Cero.

Now, let’s take a look at schools in the SEC that have won championships during that time. Alabama? Give them four football titles. Auburn? Yep, Cam Newton led them to glory on the gridiron. LSU? Give them two. Kentucky? Calipari finally won the whole thing in 2012. Florida? Four titles, two each in football and men’s basketball.

Way to go, Wisconsin! You have officially bragged about getting participation trophies for the past 15 years. Oh, and your “legend” of a basketball coach got caught in philanderous relationships with others in the athletic department, but let’s just gloss over that.

– Let’s take a second to talk about Jim McElwain’s goatee.

The goatee game is ???? by Jim McElwain. #Gators pic.twitter.com/mbQyj04Qho

I might be in the minority, but I am digging it and think it fits his laissez faire lifestyle. He says he will let his wife Karen make the ultimate decision on whether or not he can keep it, but if she can put up with his no socks rule, a little facial hair should be no big thing.

– How many times a year do you think a typical head coach wakes up in the morning and thinks, “I do not want to get out of bed and deal with everything coming at me today”? Or is that something that never crosses their mind because they are so mentally wired to focus on their job that they wouldn’t want to, you know, stay in bed and watch soap operas for just one day? I plan on asking this at SEC Media Days.

– Basketball related, but Ashley Judd complaining about a fellow Kentucky fan saying he is a Trump fan and acting like she is petrified by it is plain dumb. One, stop going to games. You are not even that good of a fan. Two, you are actually shocked that a Kentucky fan would be a Trump supporter? Really? That’s like going to a Grateful Dead concert and being appalled that the people there are on drugs.

– LSU’s new offensive coordinator Matt Canada was heard yelling “you just wasted 45 seconds of my time” during a recent spring practice. That must be a familiar phrase in Baton Rouge, as most Tiger offensive players probably yelled “you just wasted four years of our eligibility” at former OC Cam Cameron. Also, I get the feeling that Canada is trying to be that new guy that wants everyone to think he is a total hard-ass. You know those types of people.

– Missouri seriously spent $85,000 on a search firm and ended up hiring Barry Odom, who was an assistant on the staff already? How do I start one of these search firms? It sounds like a lot of money for little work.

Me (after check clears): “Go with Dabo Swinney.”

I desperately want to see what all that money went to during the search process. And isn’t finding a new head coach part of the athletic department’s job? Isn’t that why an athletic director gets paid the big bucks? Search firms are bogus.