Take a look at what we’re vibing on in the SEC, including saying “sorry, not sorry” for all of our conference pride and boastful attitudes.

SEC fans – and I include myself in this group – have a reputation of being a little too proud of the conference. We tend to do the “S-E-C!” chant whenever anything good happens for one of the 14 schools.

A person who attended Georgia wins the 200m breaststroke at the Goodwill Games in Turkmenistan? S-E-C!

I get it: the cheer and the overall boisterous attitude of the fans can get a little annoying at times. Some of us might think that no other conference matters, and we might care a little too much about football – so much it effects our daily life. But here’s what I have to say to the haters: I don’t care.

You think it was bad when Alabama, Auburn, LSU, and Florida brought seven straight college football championships home to roost? Well buckle up, partner, because if the SEC continues trending upward in basketball, things are going to be unbearable.

Oh, we have always had Kentucky, our one school that treats basketball like all the others do the pigskin. We’ve heard all the talk about how the Wildcats carry the torch by themselves in roundball, and yes, that has been the case with a few exceptions.

But look what is happening now: South Carolina is in the Sweet 16, along with Florida, who just so happened to be the last basketball program to win back-to-back titles. Auburn and Alabama are on the rise under Bruce Pearl and Avery Johnson, respectively, and Arkansas is as steady as it has been since the Nolan Richardson days.

LSU has an up-and-comer coach in Will Wade who looks so young you could easily mistake him for a student manager. Missouri, who we have finally come to love and accept as a member of the greatest conference in the world, just made a home run hire in Cuonzo Martin.

Yes, the hardwood talent is there for the SEC to begin making its mark in places other than Lexington. Just be prepared: when it happens, the “S-E-C!” chants will grow to an overpowering level.

Here are some other conference thoughts in the latest edition of SEC Football Vibes. 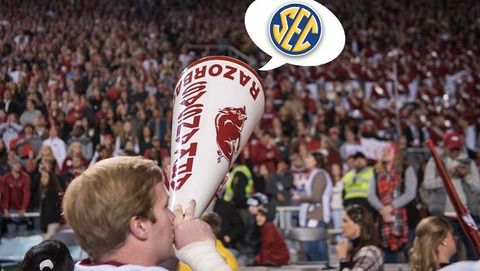 – We must discuss the insanity that is Arkansas now allowing people with gun permits to carry a gun into Razorback Stadium (and other sports facilities). What exactly is the point of this, and do legislators not realize how dangerous this is? Can you imagine if, say, LSU scores a controversial game-winning touchdown to defeat the Hogs and a bunch of drunk fans are pissed off? Could you imagine the carnage that would have happened at the end of every Iron Bowl in the history of the series if Auburn and Alabama fans were allowed to carry guns? This is the most insane thing I have heard in quite some time.

– Kentucky giving Mark Stoops a two-year contract extension makes sense – the program is finally respectable after a major downfall during the Joker Phillips era – and it shows you how far the Wildcats have to come to be a major player in the SEC. At a majority of the conference schools, a seven-win season will put you on a hot seat. At Kentucky, that will earn Stoops another year and a pay raise.

– Speaking of Kentucky and Stoops, I will be in Lexington for the Wildcats’ spring game on April 14 and am looking forward to seeing what they have put together so far this spring. I still think they have a shot at competing for the SEC East title. Know what else I am looking forward to? A day at Keeneland and my friend Paul Archey meeting me for dinner! You’re the best, buddy.

– There will be a lot of pressure on UGA quarterback Jacob Eason over the next three seasons to lead the Dawgs to a national title, but there is one thing that has been overlooked: the amount of good quarterbacks that have passed through Athens this century. You have David Greene, Matt Stafford, Aaron Murray, and now Eason. I feel as if those four guys played a combined 45 years for the Dawgs, especially Green and Stafford.

– Auburn wide receiver Kyle Davis, the Tigers top threat in the passing game, has been missing from spring practice and head coach Gus Malzahn is not sure if he will be seen at all leading up to the spring game. The reason? He is handling “personal issues.” I’m not sure what that means, but for the sake of the kid, let’s hope this is not another Duke Williams case, where a receiver with all the talent can’t get his act together.

– Lastly, I personally enjoyed Nick Saban’s rant about if his team will be going to a more ball-control offense. Every now and then, you remember that Saban is an actual human being with the ability to be hilarious. And him saying, “just create some shit, throw it on the wall and see what sticks” will definitely be the highlight of spring practice. Now I want to go have beers with him at his lake house and see what he has to say when the cameras aren’t on. He’s growing on me.