Take a look at what we’re vibing on in the SEC, including wondering why assistant coaches aren’t allowed to talk and sending someone special birthday wishes.

Hey, it’s March, which in SEC land means spring football and sort of rooting for one of the conference teams to do well in the NCAA Tournam … oh my, that freshman quarterback is lighting it up against the first-team defense during drills. Is there a position battle on our hands?

Yes, we may care a little bit more about football than we should, but let’s face it: loving SEC football is like loving your family. Sometimes they hurt you down to the core of your being, but they also have the ability to treat you to some of the greatest moments of your life.

Yes, it is that time again, so let’s march on (horrible pun) and start to question our collective insanity because we try to get ourselves to sleep while reciting each schools’ last five head coaches because that’s more fun than counting sheep. Wait … I’m the only one that does that? Sigh. Let’s get on with the latest edition of SEC Football Vibes. 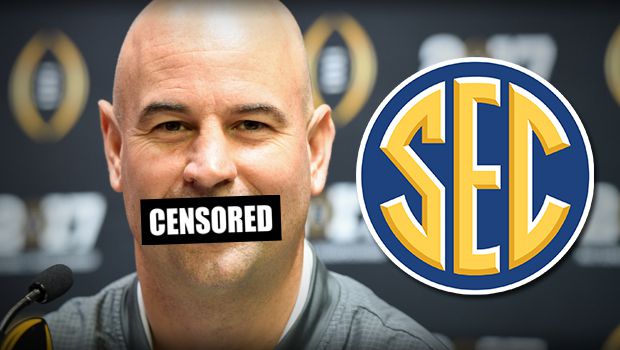 – Here’s my beef of the week: head coaches that do not let their assistants do interviews of their own. Granted, this is for selfish reasons, but how paranoid must a head coach be that he doesn’t trust a guy he hired to answer questions like, I don’t know, the grown adult he is. Are these head coaches afraid their assistants will go rogue and give out a game plan? What is the worst that could happen? Come on, Gus. I want to talk to my men Herb Hand and Tim Horton! Okay, maybe the rule makes sense if you have Lane Kiffin on your staff, but he’s off to the greener pastures of Boca Raton.

– On the other hand, the work that sports information directors do on a daily basis and the pleasantness in which they handle requests is one of the best parts of working in this business. It takes a special personality to handle everything that comes their way.

– Yes, that above paragraph was simply a way to suck up to all the SIDs out there. Sue me.

– It will never happen, but can you imagine if the SEC held a tournament for football like it does for basketball? All 14 teams playing for the championship. I’m not sure if this would make the tension even more palpable, but it would be interesting to see. Okay, maybe it doesn’t make much sense at all. Or any. Let’s move on.

– That moment I received the press release from the SEC announcing the new promotions and additions to the conference staff and didn’t see my name next to Ambassador to Germany really was a punch right in the stomach. I’m not going to say that I had to excuse myself to go cry in the bathroom, but it hurt. I even provided my resume in both languages!

“The quarterback starting job is wide open (wink) and each guy has a chance (wink) to win the job. We will evaluate each of them and see which will (wink) give us the best chance to win. Even though Sean White is out for the spring, he still has (wink) as good of a shot as anyone, even Jarrett (wink) Stidham. This battle (wink) might go down to the last week of fall practice.” (Malzahn then passes out from excessive winking)

– We should take a live look at the Ole Miss football program and … ohhhh, no.

– I’m looking forward to SEC Media Days in July because I always forget how hot the surface of the sun feels. I feel sorry for the coaches and players that have to come dressed in suits and ties. They must lose 20 pounds of water weight from all the sweating. I might just fill a kiddie pool up with water and invite them to take a dip with me this year. Only if I get the interview, though.

– Another bright idea: a new season of The Real World where the conference head coaches all have to live with each other. Who would get killed first? I’m thinking Barry Odom. Most infighting? Will Muschamp and Kirby Smart over who was Nick Saban’s better defensive coordinator. Trying to stop all the fights? Jim McElwain. I want to produce this show right now. SEC Network, please call me.

– Can we all agree to stop using the word “darkhorse” to describe Kentucky’s shot at winning the SEC East title this season? I will if you do. I swear. I’m stopping right now and coming up with a new term. Let’s see. Ummmm … they are the “jitterbug” pick to win the East. Does that work? No? I’m sticking with it.

– The fact that Dan Mullen received a contract extension just days after all the Ole Miss stuff came out was the type of passive-aggressive move that I admire. It’s not aimed exactly at the Rebels, but they know why the announcement came at that time. Well done, Bulldogs.

– Please bring back the orange pants, Butch Jones. We are not asking for much. We just want to see you, one Saturday, dressed in bright orange pants. Hell, wear a suit jacket of the same color as well. Let’s make this a thing. I’m going to talk him into this.

– Finally, today is my sister’s birthday, which makes it a special day in the Stultz household for the past I-will-not-mention-her-age-years. Like everyone else in my family with the exception of me, she lives and dies with the Kentucky Wildcats. While she was in school there, she was even on the dance team, which led to an infamous picture with the mascot.

Now, you may say: why would you bring up a picture from 1995 and what makes it infamous? Well, it is because it has been a running joke in my family ever since. My mother, the sweetest woman I know, went a bit overboard and got the picture printed in almost every size and it made appearances all over our house.

Happy Birthday, Lori! C-A-T-S CATS CATS CATS! (I will now go wash myself with Auburn soap after typing that.)