SEC Football Vibes: What Did I Ever Do To You, Coach Bielema?

Take a look at what we’re vibing on in the SEC, including wondering why Bret Bielema has me blocked on Twitter and imagining yet another Jim McElwain press conference.

It is absolutely freezing up here in Chicago, with the wind chill on my commute this morning being at a blistering -20. It isn’t supposed to let up either, but as cold and windy as it gets here in the SECond (see what I did there?) City, it will never be as frigid as the relationship between me and Bret Bielema right now.

What, you ask, happened between us? Well, I am not clear on facts, but for some strange reason he blocked me on Twitter. Now, this isn’t the first head coach to block me. A well-written letter explaining why I, as a professional sports journalist, am actually his friend, got me back in the good graces of Mr. Hugh Freeze earlier this year.

I’m sure there is a great explanation for Mr. Bielema’s blocking, so I will not spend my time worrying about it because once we cross paths again, I will be sure to bring this up to whom I consider the most entertaining man in SEC football.

With that said, it is that time again where random thoughts just flow out of my fingers, all pointing toward a conclusion where Tony Barnhart finally realizes we should definitely have a television show where things get a little scary for him as I just sit there and stare while he talks in that amazing Southern drawl. Let’s just burst right into the latest editions of SEC Football Vibes. 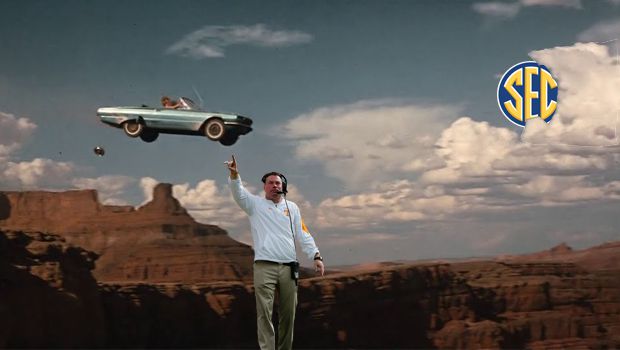 – I imagine, in my twisted mind, Butch Jones watching the end of Thelma & Louise in the theater and leaning over to the person beside him and saying, “Oh, they will be just fine. There’s nothing wrong here.” He seems to be the eternal optimist.

– Mark Stoops told me on the phone earlier today that, no, he has not spoken with his brother Bob about what it is like to face a Gus Malzahn offense, as the Sooners will as they take on Auburn in the Sugar Bowl. Sorry, Gus, I tried to get some inside secrets, but it didn’t work. Stoops saw right through me.

– Okay, Les Miles. The jig is up. You have nothing better to do, so why don’t you join me on my two-week trip to Europe in February? I say you do it. We would have an amazing time exchanging stories (though, I am certain yours are better than mine), drinking some beer and just exploring historical locations. You in? Come on, my man. Let’s do this!

– So, Florida lost its defensive coordinator Geoff Collins, the guy that was the head of the only thing good about the Gators these past two seasons. Here is a transcript of what head coach Jim McElwain had to say (maybe):

McElwain: “Gosh, man, isn’t that cool? Geoff, that is with a G, how about that, going off and getting himself a head position like I have here. Man, that’s just amazing. He’s going to be eating all kinds of those different cheesesteaks and whatnot. I’ve never had one, but I’ve heard they are good. Just like Perkins, man: solid all around. I know this one cool cat that works at Perkins, Rick, man, he just whips those dishes around like no one before. Wow, just wow.”

Reporter: “Yes, umm, that question was about the lack of quarterback play …”

– Please oblige me for a second, as I have a wager on something. My father says he reads everything I write, but, well, I don’t really believe he reads everything that I publish throughout the day, so I want to see if he caught this. If so, Dad, please send me a text saying, “Hey, saw your dumb ramblings.” I will update everyone else next week.

– Gus Malzahn is an extremely fortunate man right now, as former Baylor quarterback Jarrett Stidham has decided to come to The Plains. This will transform the Tigers into a national and SEC title contender. The bad news for Malzahn? The pressure is at an all-time high to win, and win big.

– Speaking of coaches getting big news, the report that both Nick Chubb and Sony Michel will be returning to Athens for their senior seasons, if true, will turn the Dawgs into the clubhouse favorites in the SEC East. No pressure, Kirby Smart.

– So many people are bringing different kinds of holiday presents into the office that I feel the need to do at least something. I bring my handsome looks into the office each and every day, but some (and by some, I mean most) found that lacking, so it’s time for Plan B, only I have no idea what that is. I could dress up as Santa and let them all sit on my lap and tell me what they want, but I’m afraid that they will all say, “You to stop writing Vibes.” That would be horrific.

– Lastly, my thoughts are with the great Craig Sager and his entire family upon his passing today. Sager was an idol of mine that taught me that people in the sports journalism industry don’t have to conform to standards. Now, if you excuse me, I will go watch this tribute video again and start bawling.