In this week’s SEC football vibes we travel down the wormhole of who the coaches follow on Twitter.

What did we do before Twitter? It is not often that 10 minutes passes while I am awake that I don’t open it up and start scrolling to see what is going on with the world, or to check out how many people have called me an idiot in my mentions. It is an addiction. 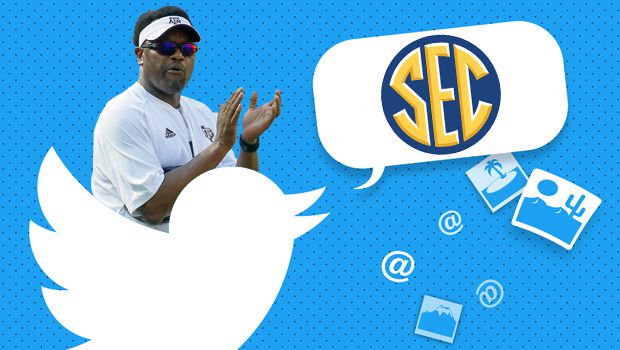 You can learn a lot about people from who they follow on Twitter. For example, my father follows a lot of people in the golf industry while also keeping an eye on Kentucky athletics (and me, of course).

Coaches are the same. Of course, the majority of the people they follow are recruits, current and former players, and people that work in the coaching industry, but every now and then, you find a gem. I bring this up because I ventured down the wormhole of finding the strangest, weirdest, and just plain goofy people that the conference coaches follow on Twitter in the latest edition of SEC Football Vibes. Join me, won’t you?

Gus Malzahn – Kenny Chesney. Why? Do you hate yourself, Gus?

Jim McElwain – Sister Hazel. Sure, the group is from Gainesville, but I like to think that in McElwain’s mind, it is still 1998.

Kirby Smart – Taylor Hicks. WHAT IS WITH THESE COACHES AND HORRIBLE MUSIC????

Mark Stoops – Mike Tyson. No word on if Stoops has ever beaten Tyson in Punch Out!…or bitten someone’s ear off.

Ed Orgeron – Les Miles. Wow. Can’t even unfollow the man you stabbed in the back, eh Coach O?

Dan Mullen – Donald Trump and Ivanka Trump. I searched and searched to see if Mike Pence was also on there, but to no avail. I always took Mullen for a Green Party guy.

Barry Odom – Flora-Bama, Pappy Van Winkle, and Airfare Watch Dog. That’s some combination right there. One, he makes $2.35 million a year, so I’m pretty sure he can afford any flight out there. Two, the best bourbon that Flora-Bama probably has is Old Grand-Dad. Lastly, if he does get a bottle of Pappy, I’m inviting myself over to his place.

Will Muschamp – Susan Sarandon. I would pay good money to sit in a room and listen to those two have a conversation. Also, does Tim Robbins have joint custody on this account?

Butch Jones – Tennessee Bureau of Investigation. You know … just for those times when you may need some help.

Kevin Sumlin – A whole smorgasbord that includes Coaching Gripes, Megyn Kelly, Guy Fieri (barf), Steve “Stone Cold” Austin and the CIA. I have nothing to add.

Derek Mason – Absolutely no one. This man’s following list is the equivalent of a dry piece of toast.

BONUS: Greg Sankey – Roger Goodell. I’m just assuming he follows to learn how to not be a horrible commissioner. Just do the opposite of Roger, Commish!