SoCon Basketball Coaches Rank the Best Jobs in the Conference

This is how polling in the SoCon shook out among coaches who voted, with one being the best and 10 being the worst: 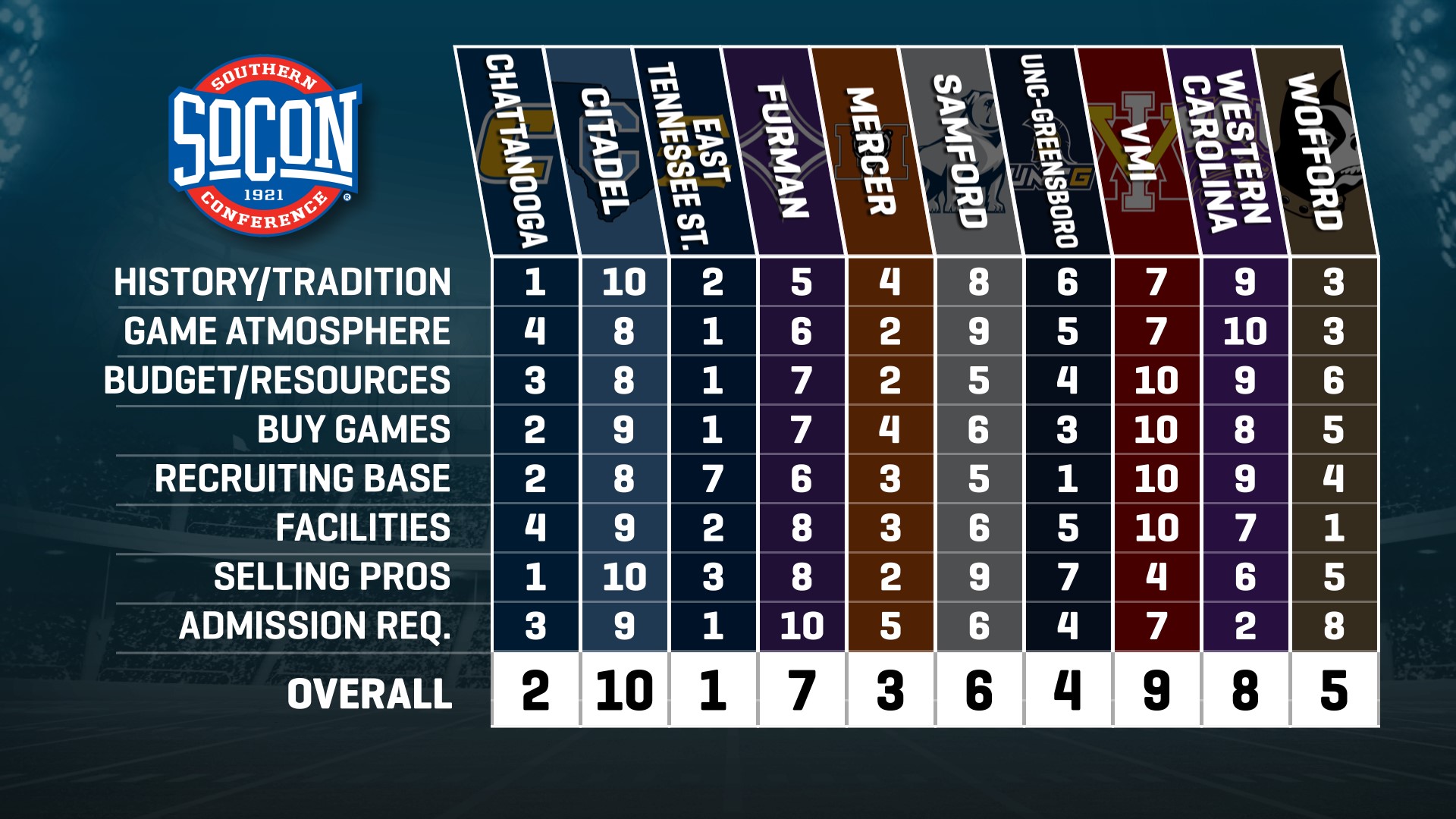 1. EAST TENNESSEE STATE (80) – The Bucs left the SoCon in 2005, but returned in 2014. They have been to the NCAA tourney 10 times and went to the Sweet 16 in 1968. The program’s biggest win, though, may have come in 1992 when a Mister Jennings-led group knocked off Arizona in the first round of the tournament. ETSU’s only true downside is its lack of a recruiting base.

Where they win: “Commitment from the administration, fans and community. Best fanbase in the league and great tradition.” – SoCon head coach

2. CHATTANOOGA (77) – The Mocs have gone to the NCAA Tournament 11 times, including a Sweet 16 appearance in 1997 under Mack McCarthy. They also rank in the top four in all nine categories — including first in history and selling pros (Gerald Wilkins, among others).

Where they win: “Facilities are really good, and the location and proximity. The city of Chattanooga is a major benefit also.” – SoCon head coach

Where they lose: “Facility is old and big, and needs some updating. Maybe too big of a spot. Commuter school ‘feel’ to it as well.” – SoCon assistant

3. MERCER (69) – The Bears have only been to the NCAA Tournament three times, and one of those was in 2014 — when Bob Hoffman coached Mercer to an upset over Duke. Mercer ranks in the top three in game atmosphere, budget, recruiting base, facilities and selling pros (Sam Mitchell).

Where they win: “Community support, booster support, facilities are good, and administration and alumni will spend money for the program to be successful. It also helps with it being so close to Atlanta and Florida.” – SoCon assistant

Where they lose: “Macon. The area around the school isn’t safe, and local mid-major kids want to leave Georgia. Atlanta kids almost look down on Macon.” – SoCon assistant

4. UNC GREENSBORO (61) – The Spartans have reached the NCAA tourney three times — in 1996 under Randy Peele, in 2001 under Fran McCaffery and in 2018 under current coach Wes Miller. The job ranks first in the league in recruiting base, and third in TV exposure.

Where they win: “They support it, and don’t have football. They can spend money. Great practice facility, but the biggest thing is they have support.” – SoCon head coach

Where they lose: “Not having the arena on campus. It’s downtown. But honestly, there aren’t a lot of negatives with the job.” – SoCon assistant

5. WOFFORD (60) – The recent upgrades with the arena have taken this from a job towards the bottom of the league to one in the top half of the conference. Coach Mike Young, who has been at the helm since 2002, and the Terriers made the Big Dance in 2010, 2011, 2014, 2015 and 2019 — a season in which they ran the table in conference play and became nationally ranked. Its budget is still towards the middle of the league, and admissions make it a tougher gig.

Where they win: “The facility is the biggest thing right now. Fans and the community in Spartanburg support the program, especially recently. Great new arena and a good home-court advantage.” – SoCon head coach

Where they lose: “Smallest campus and school in the league. It’s tiny, and there’s not a ton to do in Spartanburg. Tougher academics than most of the teams in the league, and no grad school makes it tougher.” – SoCon assistant

6. SAMFORD (38) – The Bulldogs played in a pair of NCAA Tournaments back in 1999 and 2000 under Jimmy Tillette. There’s just not much history or support, but there is a strong recruiting base and decent facilities.

Where they win: “Beautiful campus, good city in Birmingham, and can recruit the entire South. I think it’s the biggest sleeper job in the league.” – SoCon head coach

Where they lose: “It’s a football school in a football state. They just don’t draw. School is mostly females, and they don’t tend to show up in droves or make the rowdiest of crowds.” – SoCon assistant

7. FURMAN (36) – The Paladins went to the Sweet 16 in 1974, and have gone dancing six times overall — but not since 1980. It’s been a dry spell, with Jene Davis, Butch Estes, Joey Cantafio, Larry Davis, Jeff Jackson and Niko Medved all coming up short. It ranks towards the middle of the league in most categories, but the facilities are towards the bottom and the stingy admission standards make it difficult.

Where they win: “Campus is nice, and the city of Greenville is awesome. Big-time academics can be a selling point.” – SoCon head coach

Where they lose: “The facility sucks. Has a stage in it and diagonal seating. They have to drop curtains down before the games to square it off.” – SoCon assistant

8. WESTERN CAROLINA (30) – The Catamounts don’t have much tradition, reaching the NCAA tourney just once in 1996 under Phil Hopkins. Many feel that former coach Larry Hunter overachieved in his time, going at least .500 in league play eight times. Former NBA player Kevin Martin came out of WCU, and that helps sell the program.

Where they win: “Administration supports basketball, and the campus — and arena — are both pretty nice. The fanbase wants a winner and will support it if and when they win.” – SoCon assistant

Where they lose: “It’s the worst locale in the league, in the mountains. We have a hard time finding a hotel over there to stay.” – SoCon head coach

Where they win: “They don’t deal with a lot of bad kids. Most of the kids they get are high character. The atmosphere for games on Saturday is big time with all the cadets there.” – SoCon head coach

Where they lose: “Recruiting players that want to balance [a] military lifestyle at school. That’s not easy. At the end of the day, they are getting D-2 players who have no options. They and Citadel both have to develop guys.” – SoCon assistant

10. CITADEL (20) – A military school that has virtually no tradition. Not a single NCAA Tournament appearance. The program’s lone postseason appearance is a CIT bid in 2009. It’s a brutal job that ranks in the bottom three in every single category.

Where they win: “Location. Charleston is one of the best places in the country to live.” – SoCon head coach

Where they lose: “Recruiting to a military school, and no basketball tradition.” – SoCon assistant