This is how polling in the Summit League shook out among coaches who voted, with one being the best and nine being the worst: 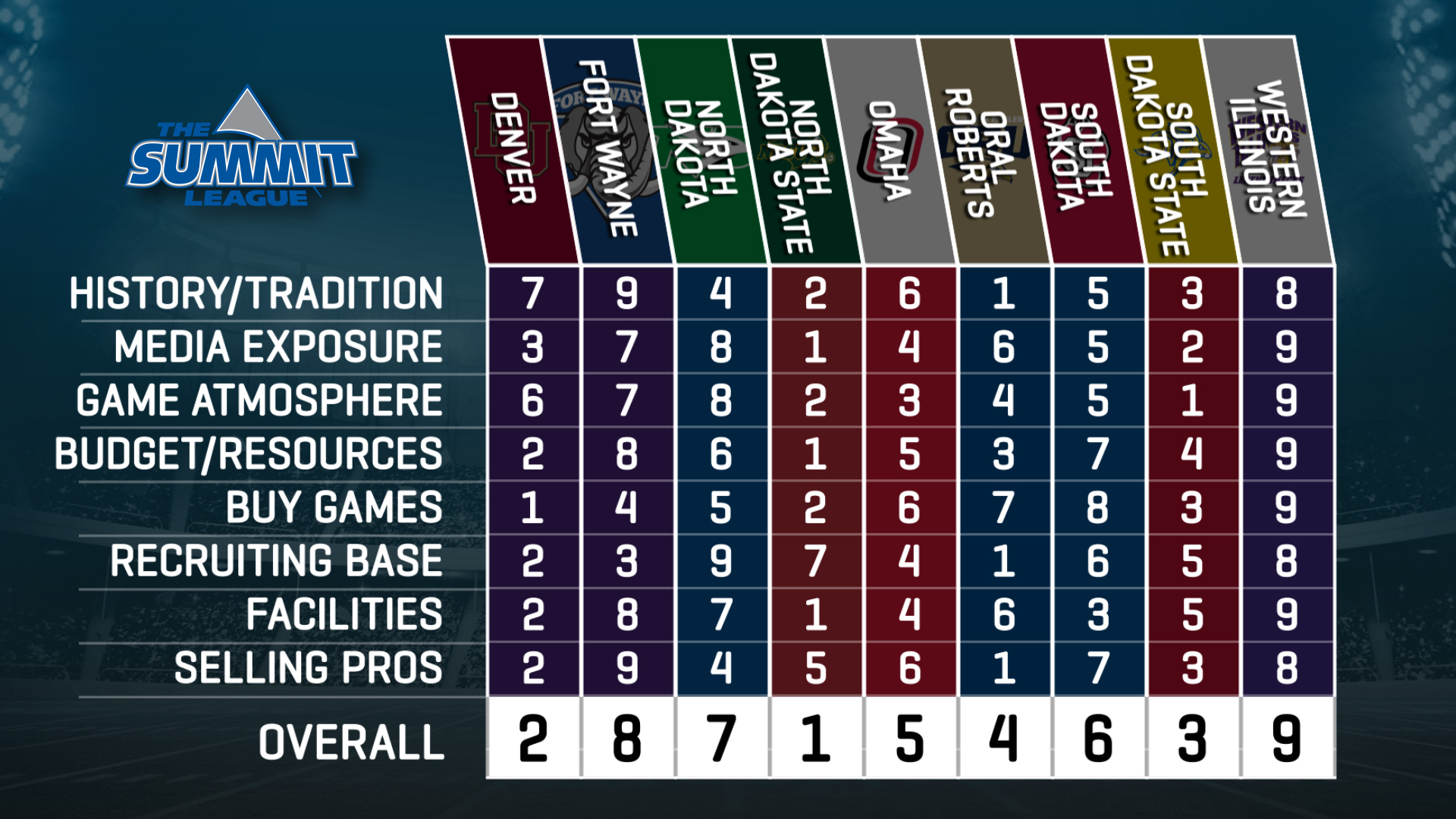 Where they win: “Great facilities, they have a big-time budget and support. Fargo is a cool sports town, it’s close to Minneapolis, and it’s easier to travel to than the other Dakota jobs. Football is also a huge help for the basketball program.” – Summit head coach

Where they lose: “It’s cold as shit in the winter, and there’s not much talent in the state to recruit.” – Summit assistant coach

2. DENVER (55) – The Pioneers left the D-1 ranks in 1979, and returned about 20 years later. They were in the Sun Belt from 1999 until 2012, when they spent one year in the WAC before joining the Summit in 2013. Denver ranks first in buy games, and second in the league in budget, recruiting base, facilities and pros.

Where they win: “Location and financial support. They also don’t have to play any buy games, which helps.” – Summit head coach

Where they lose: “They don’t really care about basketball there. The arena always seems empty. It’s a hockey school, and academics also make it difficult.” – Summit assistant coach

3. SOUTH DAKOTA STATE (54) – The Jackrabbits were extremely successful in the D-2 ranks before making the move to Division 1 in 2004. South Dakota State has reached the NCAA Tournament five times since making the jump — in 2012, 2013, 2016, 2017 and 2018. It ranks in the top half of the league in every category, and tops the conference in game atmosphere.

Where they win: “Tradition, fanbase, just got a practice facility and coaches are paid at the top of the league. It also helps that the Summit League championship is in Sioux Falls every year.” – Summit head coach

Where they lose: “Proximity to players, and it’s a small farm town.” – Summit assistant coach

4. ORAL ROBERTS (51) – The Golden Eagles have gone to a handful of NCAA Tournaments, including three straight under Scott Sutton from 2006-08. They also went to the Elite Eight way back in 1974 under Ken Trickey. It has no shortage of history and also has the best recruiting base in the league. They have NBA players to sell: Mark Acres and Haywoode Workman.

Where they win: “No football, so it’s all about basketball. Great proximity to Texas and Arkansas.” – Summit assistant

Where they lose: “Travel to the Dakotas. It’s not easy.” – Summit assistant

5. OMAHA (42) – The Mavericks chose the D-1 route in 2011, and 2015 was their first season eligible for the Big Dance. Omaha ranks towards the middle in just about every category.

Where they win: “The city of Omaha. It’s so underrated. Great little city that you can sell to recruits.” – Summit assistant

Where they lose: “Hockey runs the show there, and they don’t have any tradition.” – Summit head coach

6. SOUTH DAKOTA (34) – The Coyotes were a successful D-2 program for years before switching to the D-1 ranks in 2008. South Dakota’s facilities are among the best in the league, but its budget is down towards the bottom of the conference.

Where they win: “Maybe the best facilities in the league along with North Dakota State, they pay coaches well and travel well.” – Summit head coach

Where they lose: “The town stinks. It’s not close to any players, fans are fair-weather.” – Summit assistant coach

7. NORTH DAKOTA (29) – The Fighting Hawks have reached the NCAA Tournament once — in 2017 under Brian Jones. The program had no shortage of success in the D-2 ranks, but entered the Great West in 2009, the Big Sky in 2012 and the Summit in 2018. One alum the program sells is Hall of Famer Phil Jackson, who played for the program in the mid-1960s.

Where they lose: “Winters are brutal. It’s the coldest damn city in the country. Hockey is what matters, and there’s no local recruiting base.” – Summit assistant coach

8. FORT WAYNE (25) – The Mastodons moved from D-2 to the D-1 ranks in 2001, and entered the Summit League in 2007. They haven’t made an NCAA tourney yet, but have a strong recruiting base. Fort Wayne ranks in the bottom three of the conference in all but two categories.

Where they win: “The arena is an awesome venue, and I hear their student housing is really good.” – Summit assistant

Where they lose: “League travel is brutal for them, and they didn’t even have an operations guy until this year. Campus has more of a commuter feel.” – Summit assistant

9. WESTERN ILLINOIS (11) – The Leathernecks have just a pair of winning seasons since 1999, and they rank either last or eighth in every single category.

Where they win: “You can get anyone into school, so you may as well just take JUCO kids. Other than that, it blows.” – Summit assistant coach

Where they lose: “It’s by far the worst job in the league, and it’s probably the worst D-1 college town in America.” – Summit head coach