During the early days of the College Football Playoff, executive director Bill Hancock was always fearful of what he called “bracket creep.”

“No (playoff) bracket ever stayed at the size it was when the event was created,” Hancock said.

The worst nightmare of Hancock — and those who favored a four-team playoff — is coming true.

When the current College Football Playoff contract ends after the 2025-26 season, 88 percent of the Football Bowl Subdivision (FBS) athletic directors want an expanded playoff, according to a survey conducted by Stadium.

Perhaps the most surprising result of the survey was not the outcry for an expanded playoff, but “The Case for 16.”

Only halfway through the playoff’s 12-year contract, there is already a growing sentiment among athletic directors that the playoff should expand directly from four to 16 teams.

“There needs to be more meaningful postseason opportunities … meaningful to the players and meaningful for the fans. Bowl games no longer fit that consistently.”

In Stadium’s survey, 11 percent of the athletic directors prefer a 16-team playoff, the second-most popular option for an expanded playoff field.

Currently, the four-team College Football Playoff provides the least access for teams to the playoff of all the major professional sports as well as the NCAA’s Football Championship Subdivision (FCS) level and Division I for college basketball. In the four-team College Football Playoff format, only 3 percent of the 130 FBS teams make the playoff — that compares to 19 percent of the FCS teams and 19.4 percent of Division I men’s basketball schools in the NCAA Tournament.

The difference in playoff access between the College Football Playoff and the four major professional leagues is even more staggering with those pro sports leagues qualifying between 33 and 53 percent of its teams for the playoffs. 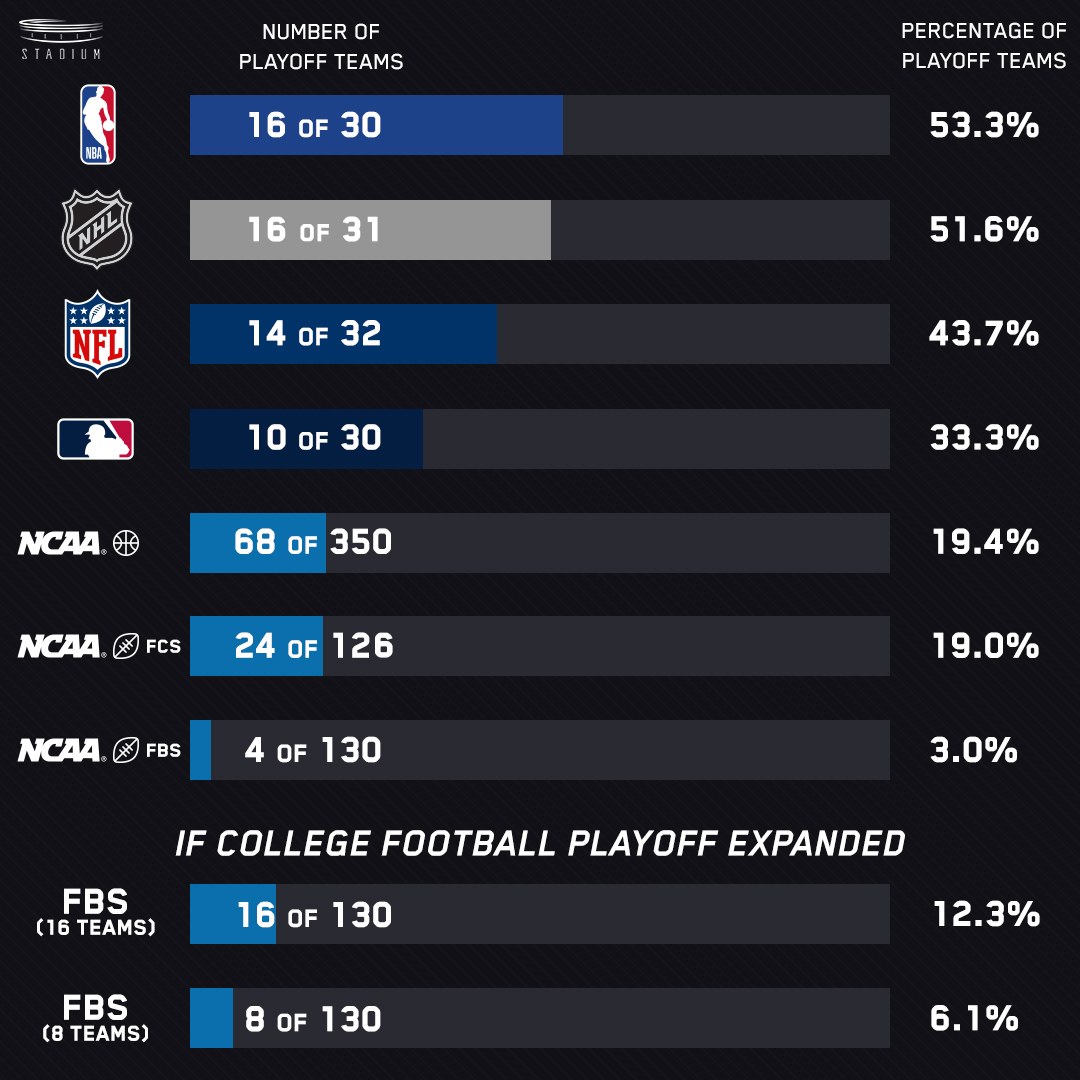 “The more playoff spots there are (in college football), the more it will encourage better scheduling because then a regular season loss or two doesn’t end a team’s championship aspirations,” a Power Five AD said.

In the College Football Playoff’s first six years, no team with two losses has ever qualified.

“It would allow for greater television exposure, greater revenue and more access,” the AD said.

While only 3 percent of FBS teams make the College Football Playoff, 65 percent of FBS teams qualify for bowl games. While the athletic directors value the “bowl experience,” some admit the bowls resemble “exhibition-type games” as a number of high-profile NFL Draft prospects have skipped bowl games because it isn’t a playoff game and they want to avoid injuries.

“In a 16-team playoff everyone would feel like they have a chance,” a Group of Five AD said. “I also do not buy many of the reasons for not supporting it. I don’t think it takes away from the regular season as it is still very difficult to finish in the top 16.

“I don’t believe it is too difficult logistically — as every other level of sport (high school, FCS, NFL, etc.) has figured out legitimate playoffs. I love bowl games and college football tradition and (a 16-team playoff) would hurt bowl games, but the value of a legitimate playoff is worth it.”

Some athletic directors recommended that in a 16-team playoff, the eight teams that lost in the first round of the tournament could then advance to play in one of the bowl games, so the student-athletes would still get the “bowl experience.”

Also, several athletic directors said by expanding the playoff, the 12-game regular season likely would need to be reduced.

“The games eliminated would be non-conference and consist mostly of games that are non-competitive, which most people don’t want to watch and most athletes don’t want to play in.”

MORE: Will There Be College Football in 2020? Athletic Directors Weigh In