Starting in the 2019-20 men’s college basketball season, the 3-point line will be moved back to the international distance of 22 feet, 1¾ inches after the rule change was approved by the NCAA Playing Rules Oversight Panel.

“Men’s Basketball Rules Committee members recommended the change after receiving positive feedback from the annual rules survey from coaches whose teams competed in the 2018 and 2019 National Invitation Tournament, where the international 3-point distance was used on an experimental basis,” according to a release from the NCAA.

The committee hopes that the extended 3-point line opens the lane for driving from the perimeter, makes 3-pointers more challenging and improves offensive spacing.

In April, we analyzed the effects of the experimental rule changes that were put in place for the 2019 NIT, which included the 22-foot, 1¾-inch 3-point line, and found that – as expected – players shot a slightly lower percentage from behind the arc and attempted fewer threes on a percentage basis.

In the NIT, 38.1 percent of shot attempts were threes, compared to 38.7 percent during the entire season.

The NCAA Playing Rules Oversight Panel also approved a rule change that will reset the shot clock to 20 seconds after a field goal attempt hits the rim and the offensive team rebounds the ball in the front court.

Like the extended 3-point line, it was an experimental rule for the 2019 NIT, and the panel believes the rule change will help the pace of play in college basketball.

There were a few other rule changes approved by the panel, according to the NCAA:

MORE: Examining the Effects of the NIT Experimental Rule Changes 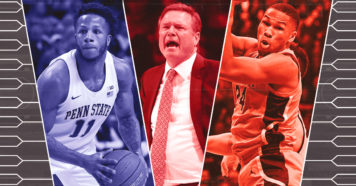 Here’s What the NCAA Tournament Bracket Looks Like Right Now