It’s not an exact science, but if you want to know how strong of a recruiting class your favorite college football team is likely to enroll, look at the school’s financial investment towards recruiting.

Stadium obtained the NCAA Financial Reports for the 2018 fiscal year for more than 50 FBS schools, most of which play in a Power Five conference. These reports are submitted to the NCAA annually, and they list detailed financial data regarding the operating revenue and expenses for each school’s athletic department.

That includes how much schools spent on recruiting.

Among the schools examined, Georgia’s $2.6 million spent on football recruiting in 2017-18 ranked first, and that spending yielded the No. 1 recruiting class in 2018, according to the 247Sports Composite rankings. On the opposite end of the spectrum, Houston ranked last among the programs examined at just over $250,000 spent on recruiting, which led to the Cougars enrolling the No. 73 recruiting class.

While there’s a parallel conversation to be had regarding the relationship between recruiting rankings and wins in college football, and which schools over- or under-achieved based upon the star-rankings of the players they enroll, there’s no denying that there’s a correlation between the amount schools spend on recruiting and their recruiting class rankings.

The scatter plot below presents that type of relationship for 51 FBS schools, showing the football recruiting expenses listed on each school’s NCAA Financial Report for the 2018 fiscal year (x-axis) and each school’s corresponding 2018 recruiting class ranking, according to the 247Sports Composite rankings (y-axis). 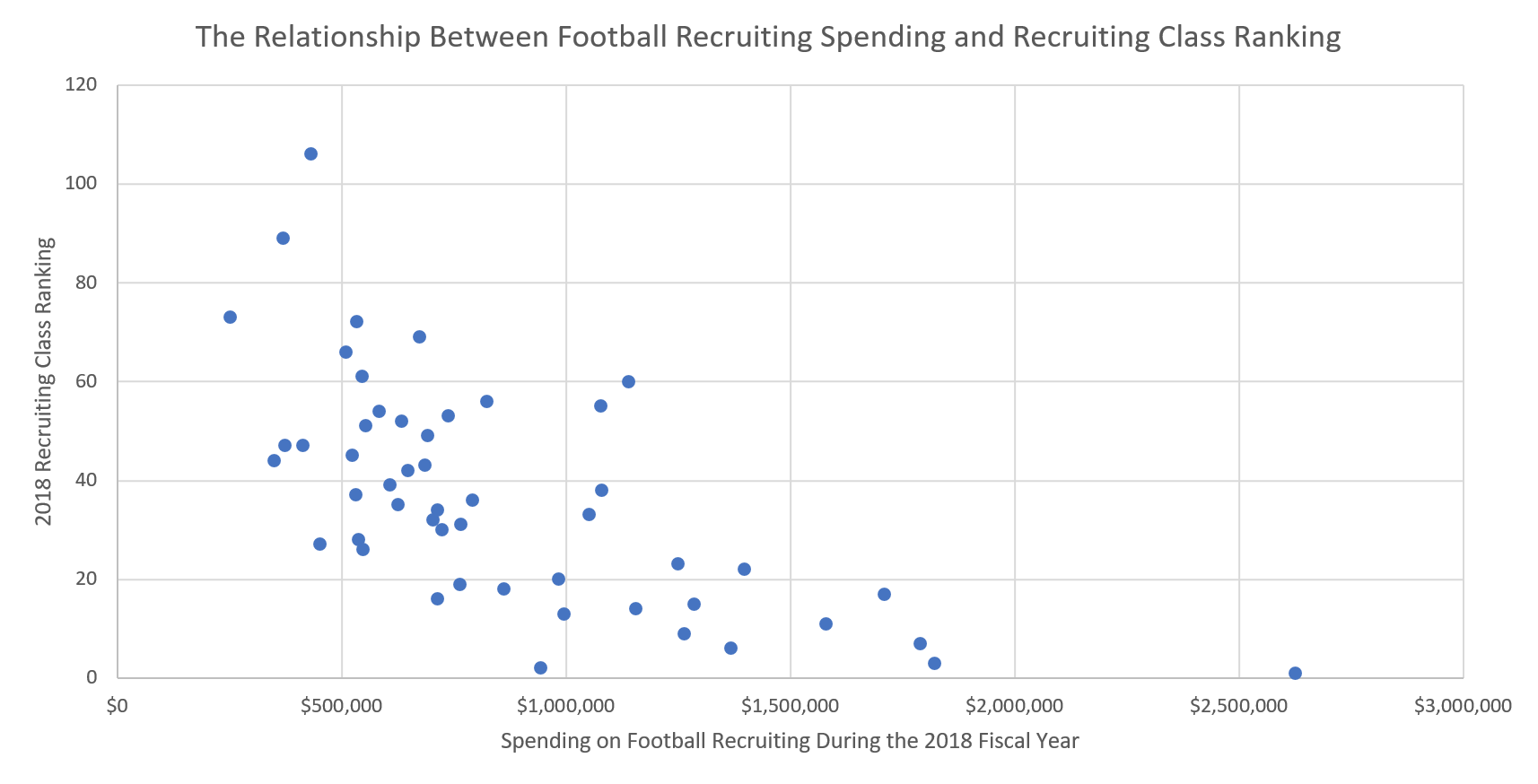 Here’s the same chart, but labeled with the schools that spent at least $1 million, or close to it, on recruiting. 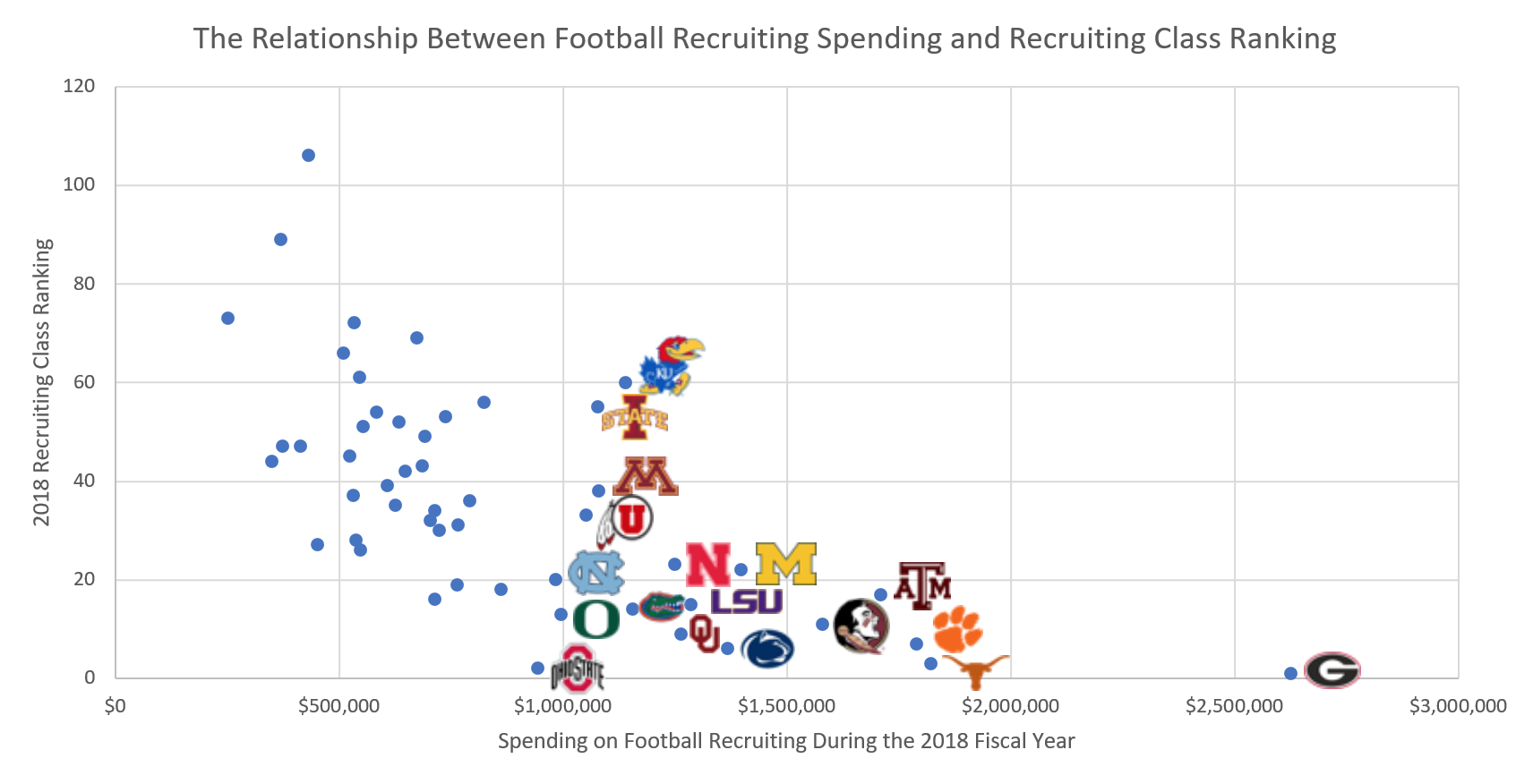 Generally speaking, there’s a negative relationship between spending and class ranking, meaning the more a school spends on recruiting, the lower (read: better) its recruiting class ranking will be.

Sure, there are exceptions like Kansas’ $1.14 million spent on recruiting resulting in the No. 60 recruiting class in 2018 and Mississippi State pulling in the No. 27 class despite barely spending over $450,000, but those exceptions hint at the impact that a school’s recent and historical success (or the lack thereof) has in recruiting.

We’ll touch on the roles that those factors play in recruiting later, but first, here’s the complete breakdown of the football recruiting expenses for the schools examined from the 2018 fiscal year and how each school’s 2018 and 2019 recruiting classes ranked.

The schools are listed in descending order of their football recruiting expenses from last fiscal year. The first column, labeled “Power Five Spending Ranking,” lists where each school’s recruiting spending in 2018 ranked among the Power Five schools examined.

Update: After the publishing of this story, Stadium later obtained the 2018 NCAA Financial Reports for Alabama, Auburn, Virginia and Virginia Tech, whose data has since been added to the data tables below.

[RELATED: These Schools Have Been Ranked the Most Often in the CFP Era]

Another interesting lens to examine the investment FBS schools put into their football programs is to compare a school’s football recruiting spending to its total investment into recruiting prospective student-athletes across all sports.

A lot of the institutions examined are considered “football schools” due to football being their highest revenue-generating sport, but the data below shows just how big of a priority football recruiting is to each university in the context of its entire athletic department.

It shouldn’t be a surprise to see Georgia, Clemson, Florida State, Texas and Texas A&M atop the chart.

The financial numbers listed below are also from the 2018 fiscal year.

[RELATED: Here’s What Schools Have Accomplished Since Current Recruits Were Born]

Here’s a conference-by-conference look at how much every Power Five school spends on recruiting across all sports and what percentage of that money goes towards football recruiting.

While we can’t obtain the NCAA Financial Report for private schools or schools from certain states due to state records laws, we can find out how much schools spent on recruiting across all men’s and women’s sports through their Equity in Athletics Data Analysis reports, which are publicly accessible.

For each conference, the schools are listed in ascending order of their total recruiting spending. 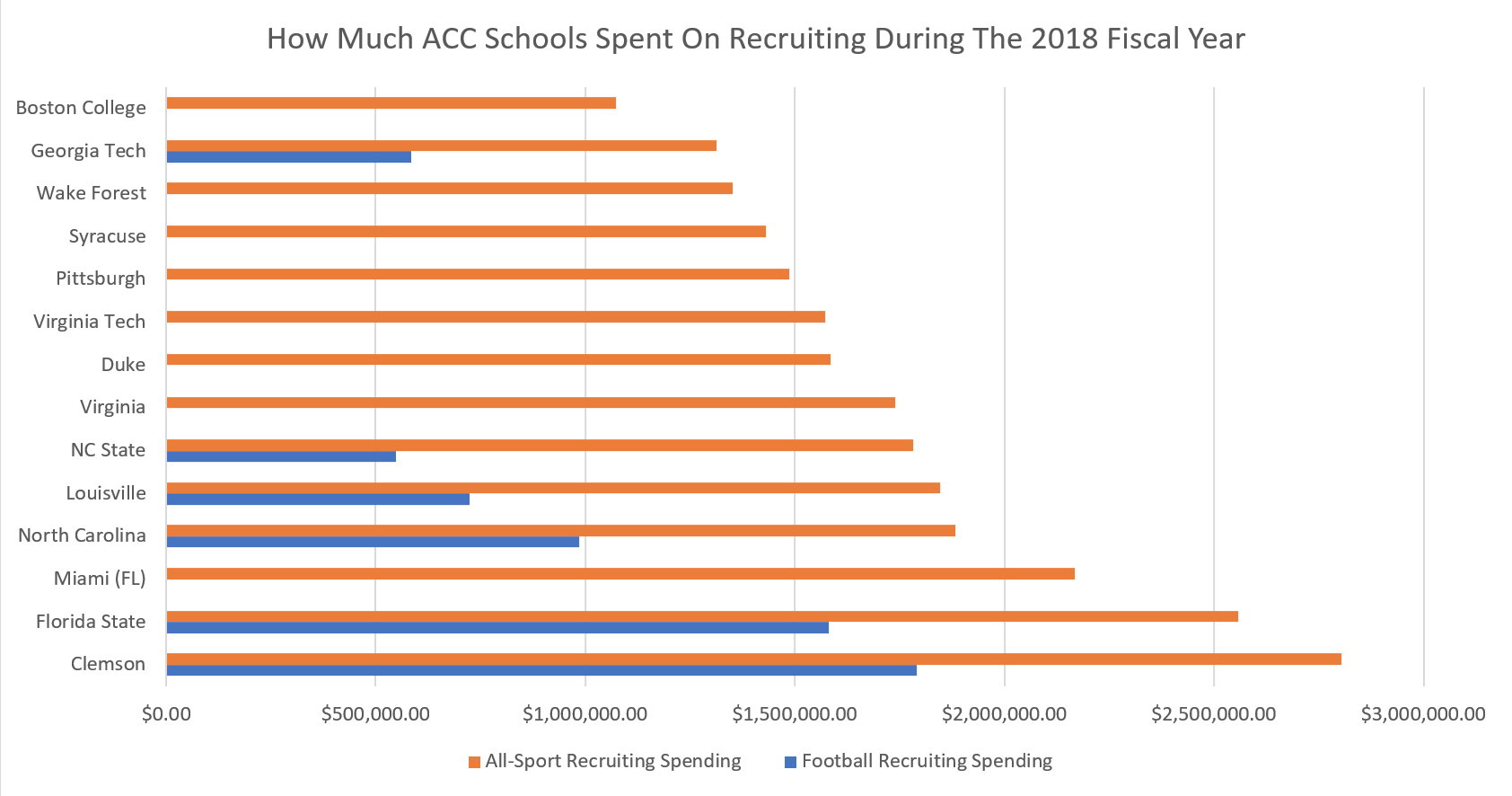 Football recruiting data for Baylor and TCU is unavailable since they are private institutions.

Football recruiting data for Northwestern is unavailable since it’s a private institution. 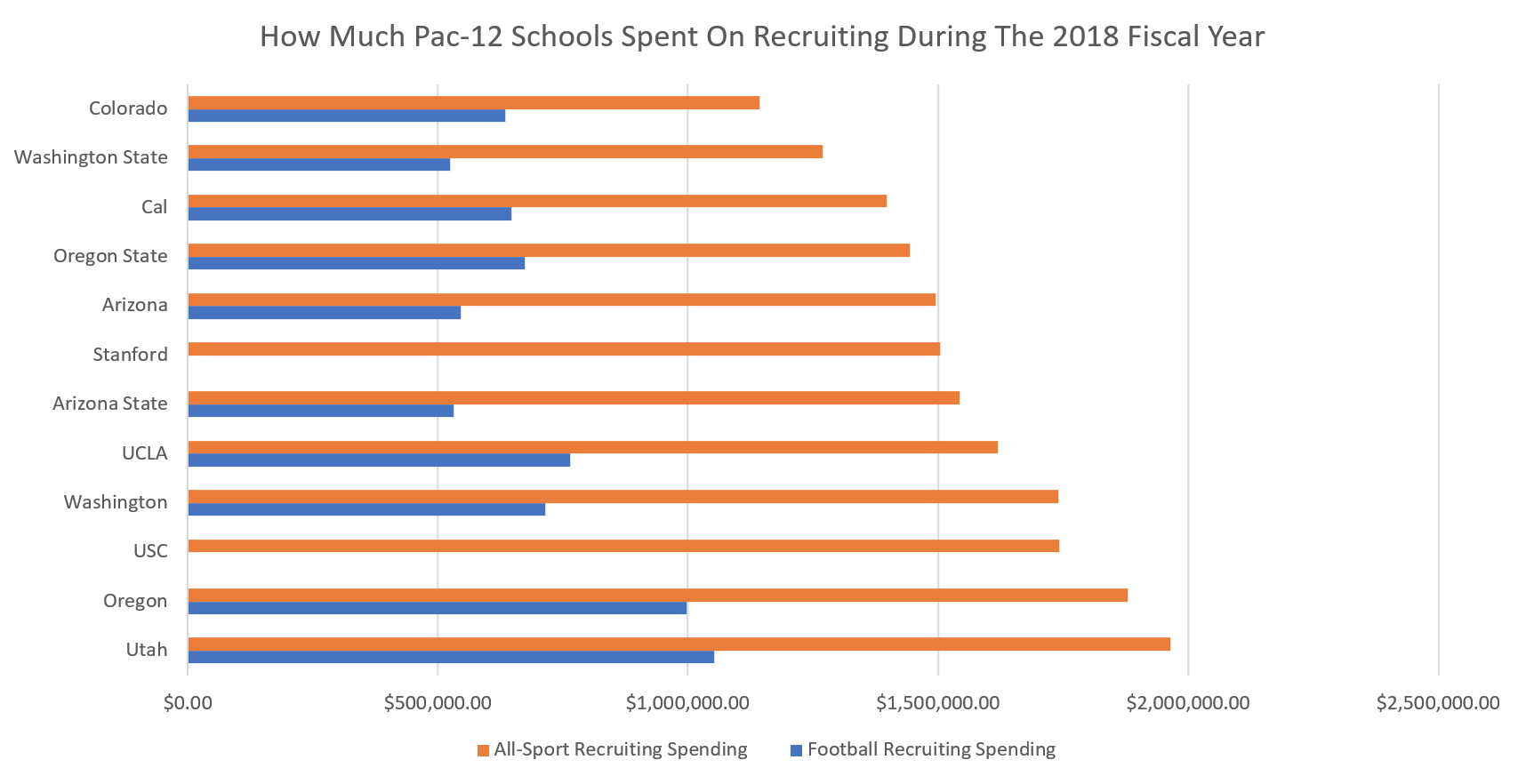 Football recruiting data for Stanford and USC is unavailable since they are private institutions. 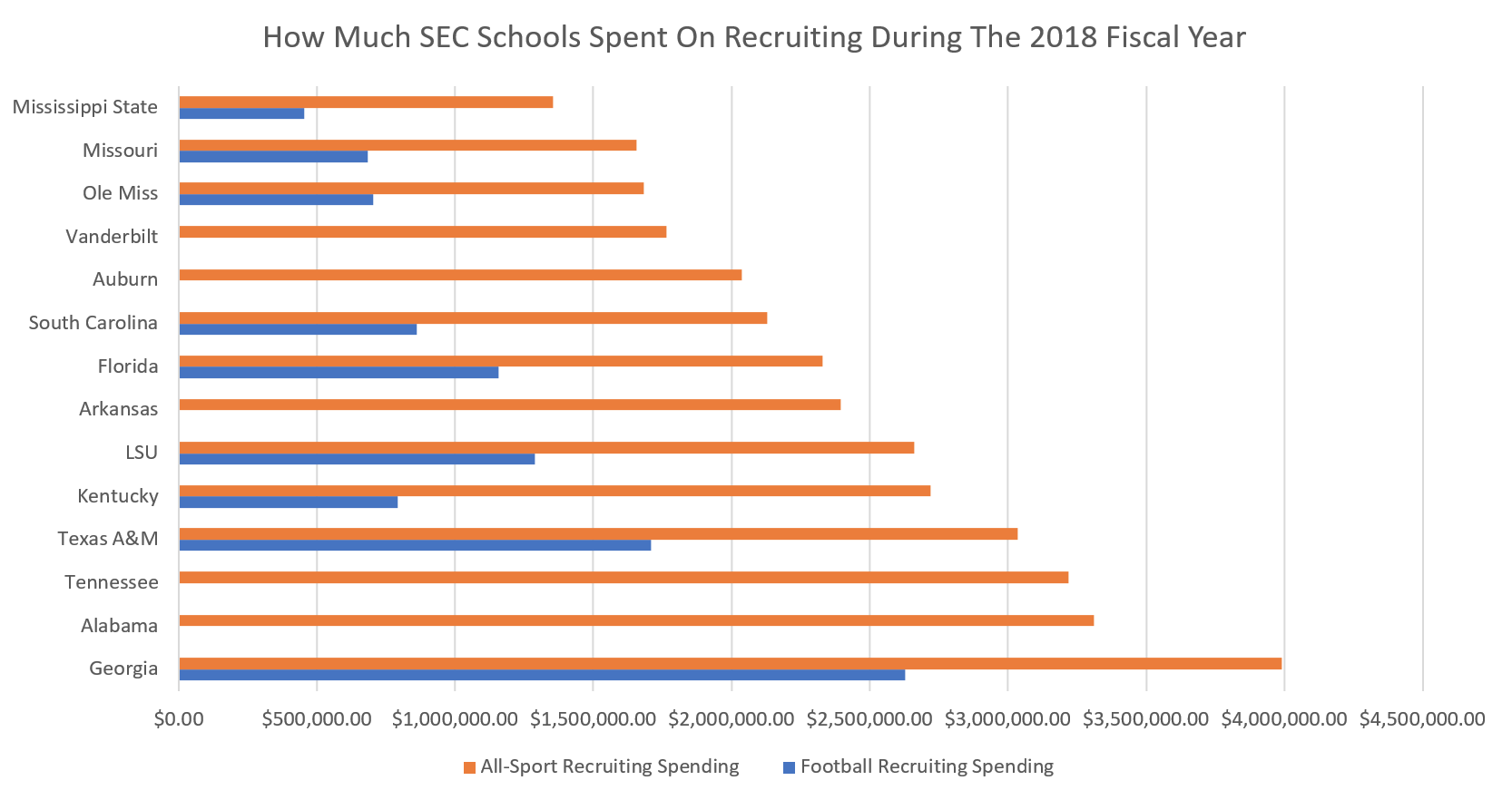 Where does the money go?

You might be wondering what types of expenses schools incur when they assemble a 20-some-player recruiting class through the work of the head coach, 10 assistant coaches and behind-the-scenes, on-campus recruiting personnel.

Stadium obtained an itemized list of LSU and Oregon’s football recruiting-related expenses from the 2018 calendar year to find the answers.

(Note: This data is different from the fiscal year numbers from the universities’ NCAA Financial Reports.)

The charts below show the types of expenses (as defined by the universities) and expense amounts for a pair of major Power Five programs that invest heavily in football recruiting.

Georgia, which landed the No. 1 recruiting class last year, spent $2.6 million on recruiting during the 2018 fiscal year and for a program that nearly won the 2018 College Football Playoff National Championship and has gone toe-to-toe with Alabama in each of the last two seasons, it was arguably worth every penny.

And if you look closer at another SEC contender, you see that since the start of the 2011 fiscal year, LSU’s spending on football recruiting has more than quadrupled, which is outlined in the chart below that shows data from the Tigers’ last 15 NCAA Financial Reports.

As shown by the “Recruiting Class Ranking” column, LSU is essentially a lock to enroll a top-15 recruiting class in the modern era of college football, according to the 247Sports Composite rankings.

In addition to being the flagship school in the talent-rich state of Louisiana with recruiting hotbeds like Texas, Florida and Mississippi nearby, LSU can sell its annual appearances in bowl games, plus relatively recent conference and national championships.

During the lifetime of 2020’s top recruits, the Tigers are one of the six most accomplished college football programs and second among SEC schools, behind only the juggernaut that its former coach, Nick Saban, has built at Alabama.

LSU has won at least eight games in every season this century, and while an 8-4 regular season won’t cut it in Baton Rouge, that’s a pretty stable floor for a program that has proven capable of winning 12 or 13 games a year.

Each of those schools enrolled a top-25 recruiting class in 2018, including five in the top 10.

That speaks to the relationship between the number of times a school has finished a season ranked in the top 10 and its 2018 recruiting class ranking — our attempt to measure the impact that selling points like “history” or “tradition” have on the recruiting trail in the present day.

Here’s a graph showing that relationship. 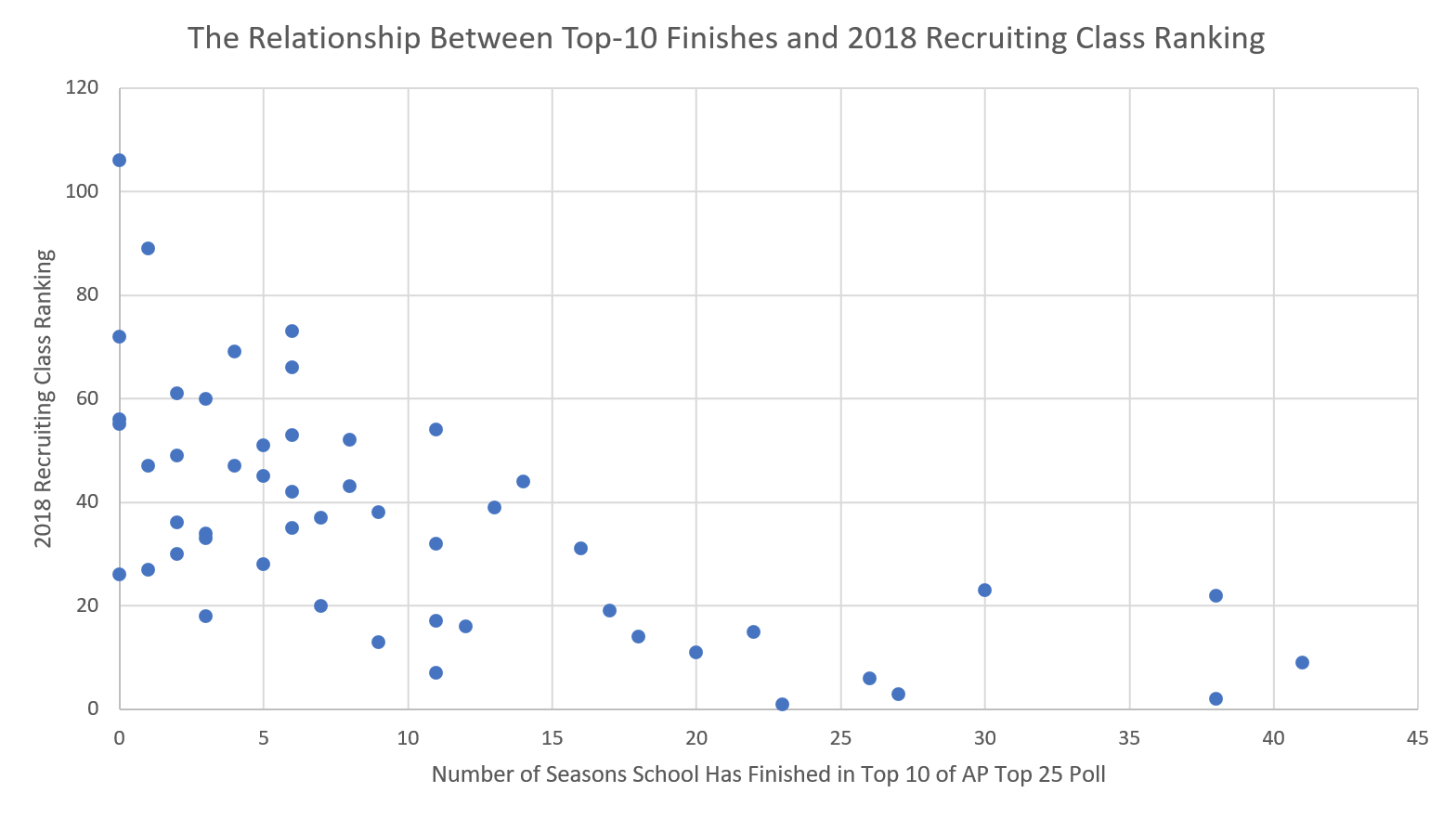 However, unlike some of its counterparts mentioned above, LSU has also shown more consistency and high-level success in the last two decades.

The following scatter plots show the relationships between:

*The S&P+ ratings are a national, 1-to-130 ranking system based upon analysis of play-by-play and drive data from every college football game each season. 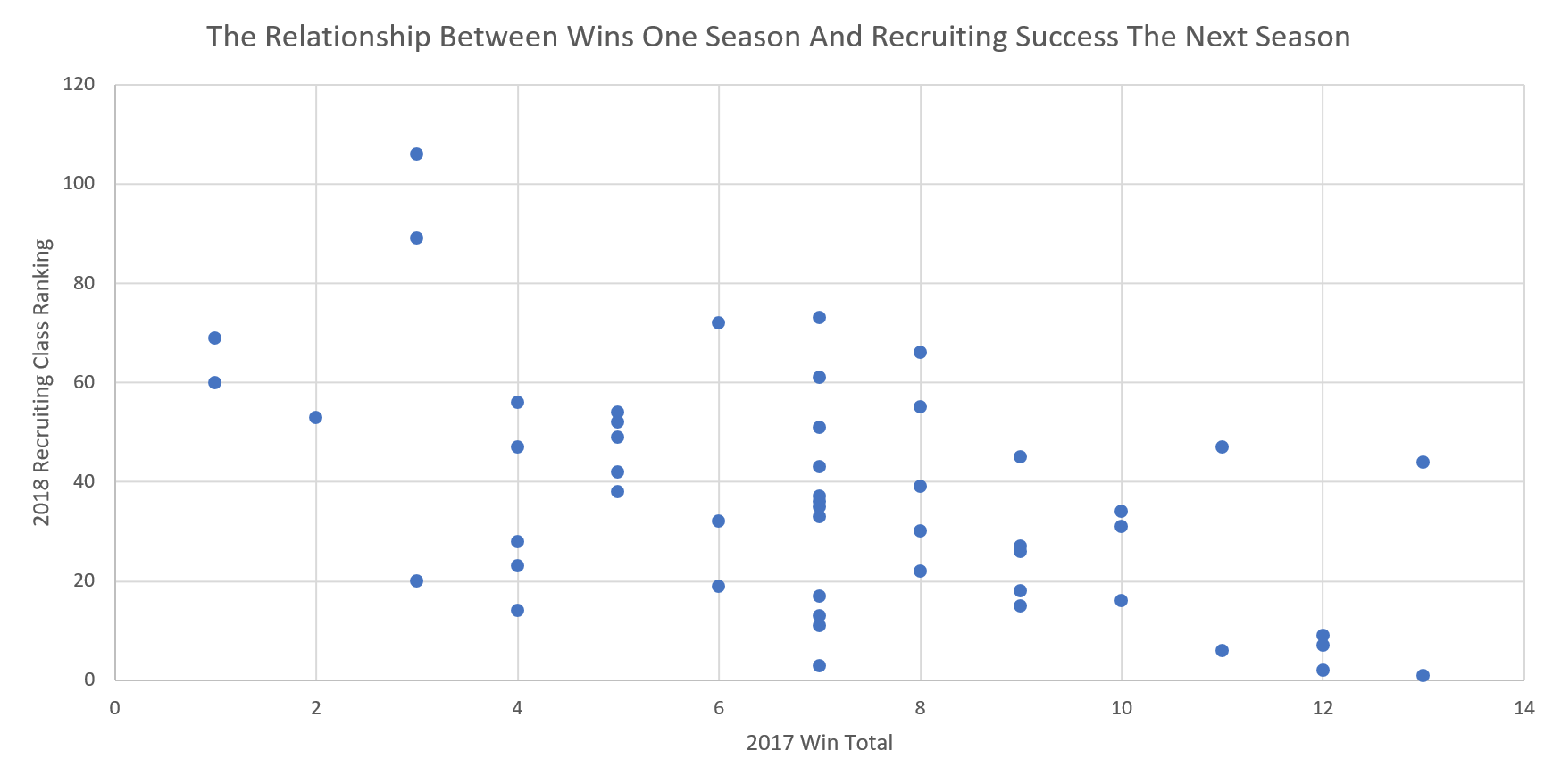 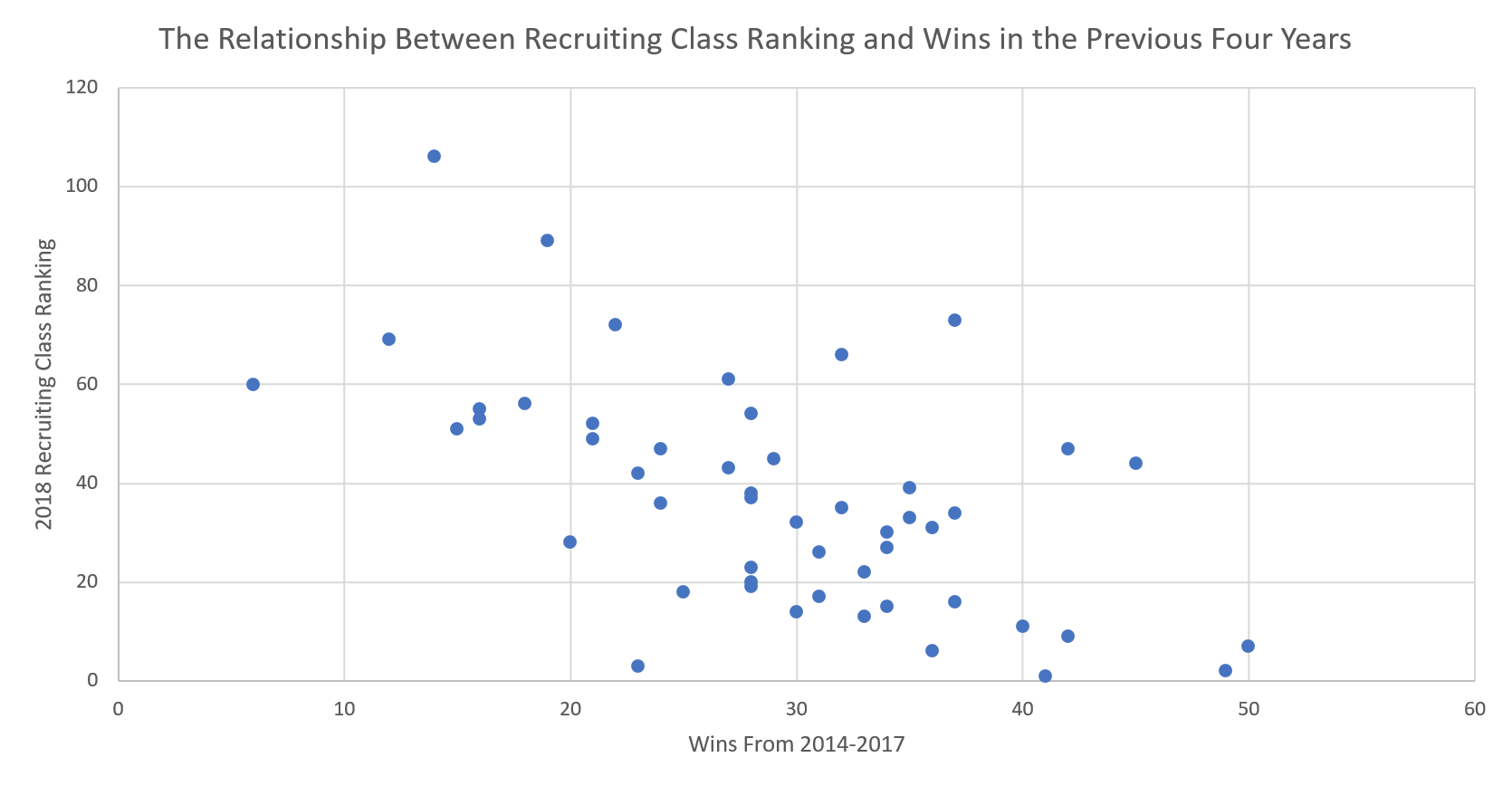 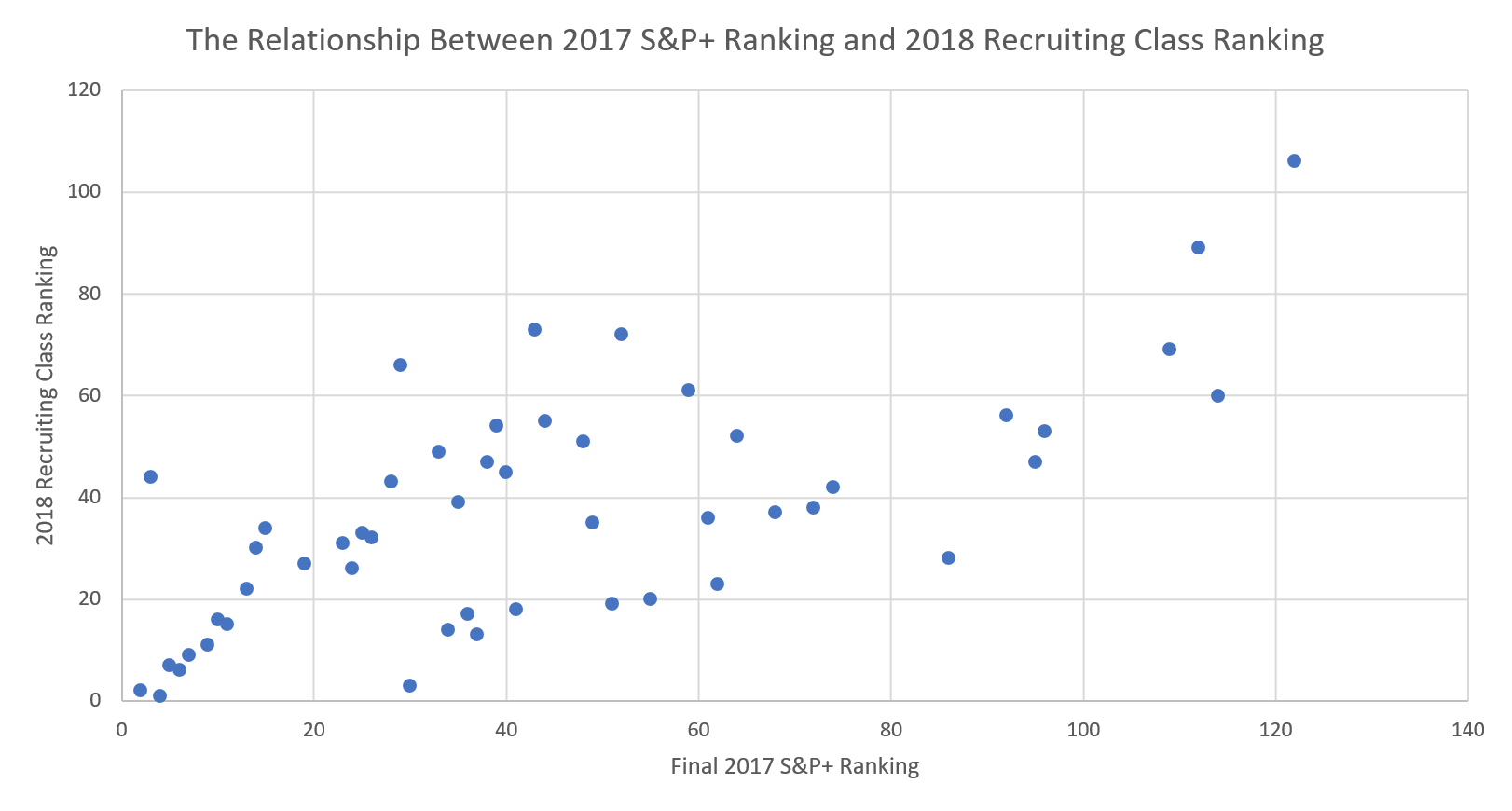 What does it all mean?

After analyzing annual million-dollar investments into recruiting, recent win totals and historical AP polls, we’re left with a recipe that tells us the surest way to land an elite recruiting class is to:

1.) invest at least $750,000 annually (but more likely at least $1.2 million) in recruiting,
2.) field a football team that has recently experienced high-level success, and
3.) be able to boast about your program’s proven winning culture.

But how many schools can check all three boxes?

Among the schools examined, 20 of the 51 programs have finished in the top 10 of the AP poll in five or fewer seasons all time, while just six schools have had a top-10 finish at least 25 times.

Most schools don’t have the history of Oklahoma, Ohio State or Texas.

That raises an interesting “chicken-or-the-egg”-type question: Is there a strong enough correlation between a school’s recruiting budget and recruiting class ranking that suggests college football programs could potentially funnel large sums of money into their recruiting and receive an immediate payoff by building a more talented roster full of 4- and 5-star recruits?

Or do schools first need to win at a high level to show blue-chip recruits (and university officials, fans and boosters) that it’s possible to win 10-plus games and challenge for conference championships consistently?

In other words, can an increased recruiting budget act as a shortcut to assembling a more talented roster in the future even if a school’s on-field results, recruiting footprint and/or program history don’t align with the profile of programs that typically land a ton of 4- and 5-star recruits?

Sure, you’d have to make a significant financial investment to assemble an elite recruiting class, but does that mean that if a team like Rutgers spent $2 million annually on recruiting, would the Scarlet Knights consistently enroll top-10 recruiting classes?

Or would the inverse be true that if Clemson’s recruiting budget was slashed to one-third of its current value and its football program only had $600,000 to work with per year to land the next wave of Tigers, would they only land a handful of blue-chip recruits?

Our immediate gut reaction to both of those questions was “No,” and it’s probably yours, too.

But those questions raise a theoretical high-risk, high-reward investment that would be fascinating to watch play out in real time as schools are currently spending more money than ever before on recruiting, and as the conversation about future College Football Playoff expansion escalates, more programs could enter the national title race in the near future.

MORE: An Inside Look at Kentucky Basketball’s Financial Commitment to Recruiting