Each year when the NCAA Tournament selection committee releases their bracket, there are always a few selections that make you scratch your head. It could be a bad seed or even a team’s inclusion in the field. It’s those times when I wonder how the bracket might look if I could have assembled some of the top bracketologists in the country and formed our own field of 68.

But it’s an idea that’s easier said than done. What are the chances of compiling a bracket like this after Selection Sunday? Close to zero. What if I gathered a group just a few days before the selection committee releases their bracket? With all of us busy putting the final touches on our own brackets, this would not be feasible. So, I thought that dream would never happen.

And then… this year happened. The cancellation of the NCAA Tournament and the decision by the NCAA men’s basketball committee not to release a bracket has left us all wanting more.

The time is now.

To mimic the size of the actual committee, I gathered 10 of the industry’s best bracketologists. I have met so many people over my 20-plus years of doing this that cutting the size of the committee to just 10 was a tough task.

The 10th member, Bracket Project, is a site that tracks all the brackets out there (90 on the final matrix this year, quite a bit smaller than in years past) and scores all of us based on our accuracy compared to the committee. I used this average as the 10th member, as it represents a cross section of all the bracket projections out there. Thanks to Brian Phan for managing this great site and for all the work he puts into this during the college basketball season.

So here it is: the ultimate NCAA Tournament bracket. 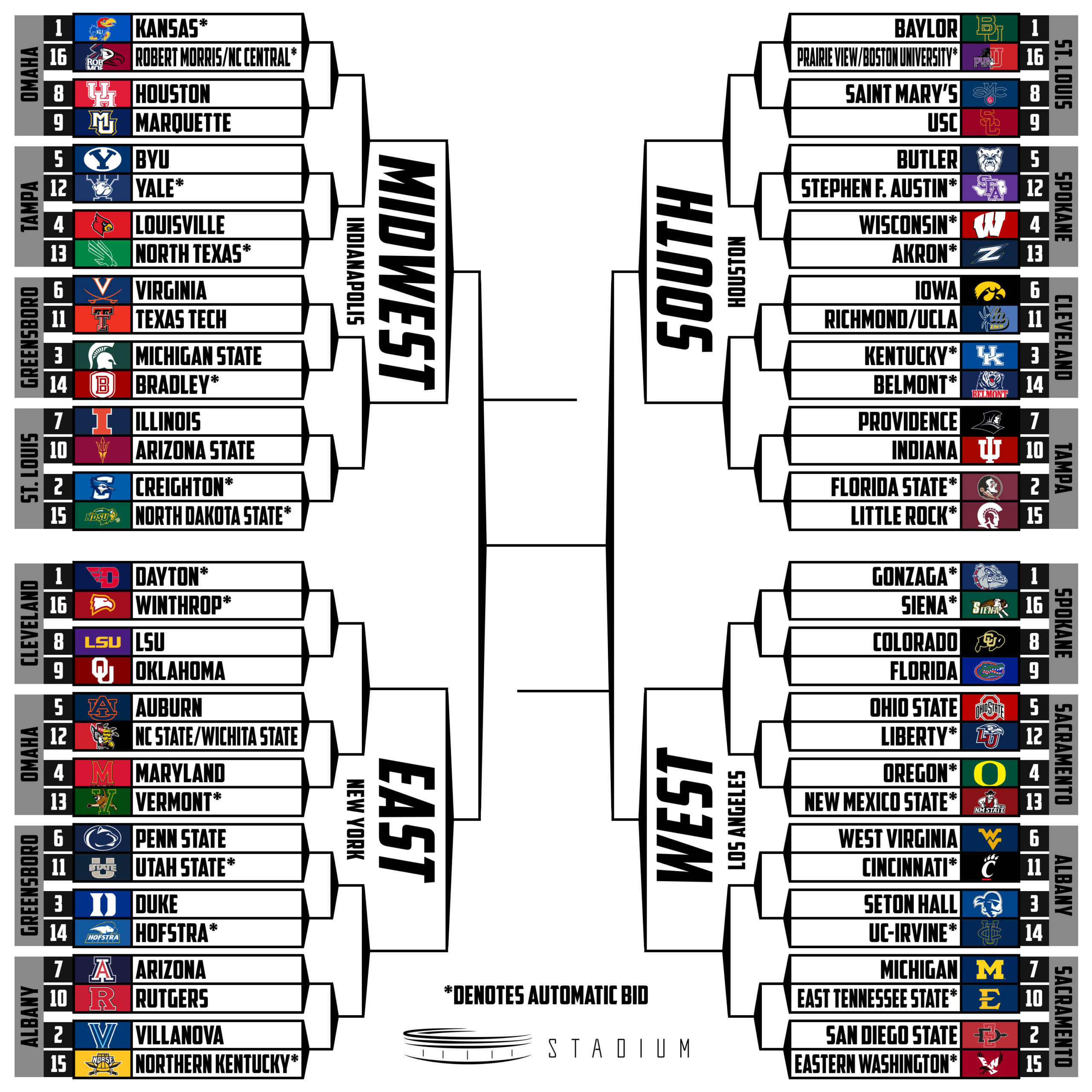 The automatic qualifiers were chosen in two ways: winners of conference tournaments that were actually completed and regular-season winners of conferences whose tournaments were canceled. Ties were broken by giving the AQ to the number one seed in that conference’s tournament. Much has been written about the fairness of this process as it would have related to the NCAA releasing a bracket, but I really see no other way to do it. Keep in mind: No team from a Power Five school made the tournament only on the merits of the AQ.

There were some partial tournament results from conferences forced to cancel mid-tournament – most notably Xavier, whose loss to DePaul in a play-in game of the Big East tournament may have cost them a spot in our bracket. Given the circumstances, we judged the teams as they sat at the end of the day on March 11.

Once all the brackets and seed lists were gathered, we simply followed the NCAA basketball principles for selecting the field. The process begins with each member submitting a list of 36 teams they feel should be in the field. If a team appears on at least eight of the 10 ballots, the team is put into the field.

In most years, the committee would place anywhere from 22 to 28 teams in the field during this process. During the shortened committee meeting this year, the NCAA committee added 31 – a very high number. During our Ultimate committee process, we added 33 teams. Again, a very high number but in line with what the committee did this year. This reduced the process where teams are added four at a time since there were fewer teams to add after the initial ballot.

• There weren’t a lot of surprises on the first five lines. It was interesting to see where teams like Kentucky, Maryland, Duke, Seton Hall and Michigan State landed, but it was near consensus on about 90% of those teams.

• The voting in the seven through nine lines was extremely close. In fact, at one point where we were choosing four teams from a ballot of eight; three different tie breakers were used to get the four teams into the field.

• I was curious to see, if an individual member ranked a team much higher or lower than the other members, how that would affect that team’s ranking in the field. It did not affect the ranking – there was a consensus and that team was not overly affected by an outlier. However, I did notice that Xavier was seeded favorably on most brackets, giving them a chance to make the field. But three members had them seeded down their lists, which eventually kept Xavier out of the field as the first team out. This is why the committee has 10 members: so that a wide range of observations and opinions are taken into consideration.

• The biggest surprise to me was Wichita State being selected to the field. Many of the final brackets I saw had the Shockers out, but they had just enough support to sneak into the field.

In the end, I couldn’t have been happier with the process and how the bracket turned out. And while anyone could disagree with a team here or there, I feel the final seed list and bracket represent the teams’ resumes fairly and their place in the 2019-20 season pecking order.

This process of determining tournament locations went very smoothly with minimal changes required. The first was to accommodate the fact that BYU had to be in a region and a first-round site that played their games on Thursday and Saturday as opposed to Friday and Sunday. Hence, Maryland was moved to Omaha so Louisville could be a Thursday-Saturday site in Tampa.

Perhaps the only significant change was flipping Utah State (40) and Eastern Tennessee State (41) on the seed list. We moved ETSU up to a 40 and a 10-seed as Utah State could not meet conference foe San Diego State in a potential second-round matchup. The movement on the 10 line was somewhat hampered by the fact that two Big Ten teams resided there. I also did not want to move Arizona State in the West as that move would have meant that half the Pac-12 field resided in one region. With 10 teams from the conference making the field, it can cause bracketing issues. However, this was the only one that came up and since both teams were automatic qualifiers we felt the movement was minimal.

I have to give a big thanks to all of my friends who participated in this effort. When I addressed each of them with this project, I wasn’t sure how it would be accepted, but to my delight, each of these gentlemen were excited about the bracket and those that I needed a little bit of information from were so incredibly helpful. Thanks to all of them for the great content they provide to all of us during the college hoops season.

And a special thanks to my friend Joe Lunardi, who has been so supportive of this project and many of my other endeavors through the years. I can’t wait for life to get back to normal so I can get him out on the golf course to take some of his money.

I know we are all very disappointed that the season came to such a sudden end. But we will get through this, and next season really will seem like a special blessing. Good health, be safe, and until next year.