Oklahoma and Oklahoma State are the 2017 preseason favorites to win the Big 12, in part because Baker Mayfield and Mason Rudolph are their respective quarterbacks. Mayfield and Rudolph will jockey for top honors, both within the league and potentially at the national level. The balance of the league? It’s a case of wait-and-see. A lot will depend on the growth of young passers, such as Texas’ Shane Buechele, Iowa State’s Jacob Park and Baylor’s Zach Smith. Oh, and it’ll be worth closely monitoring a pair of transfers, West Virginia’s Will Grier and Kansas’ Peyton Bender.

Buechele is no longer a rookie, and Tom Herman is in charge of his development. Yeah, there’s plenty of optimism surrounding Buechele’s second season as a Longhorn. He got his feet wet as the starter last year, completing 60.4% of his passes for 2,958 yards, 21 touchdowns and 11 interceptions. Buechele hit a wall late in the year, which is not uncommon for quarterbacks only a year removed from high school. He’ll be expected to take the next step, especially since Herman has already signed his first quarterback as the Texas coach.

Hill’s first season in Fort Worth educed mixed results, to say the least. On the one hand, the multi-dimensional Texas A&M transfer accounted for more than 3,800 total yards and 27 touchdowns, and was the victim of far too many dropped balls. However, on the other, Hill led the Big 12 in interceptions and generally regressed after the Oct. 1 Oklahoma game. So much for TCU in 2017 hinges on the senior’s ability to play with more consistency and cut down on his turnovers.

Ertz isn’t going to kill defenses with his arm, which is actually okay in the run-heavy Wildcat offense. But he will gash opponents with his legs, and he’ll be taking a wicked head of steam into 2017. Ertz’s output will resemble that of an option quarterback. He rushed for a dozen scores and over 1,000 yards as a junior to help open up opportunities through the air. If Ertz can pop a few more long balls to Byron Pringle and Dominique Heath, it’s going to really free up running lanes for he and the backs.

Watch your back, Brandon Weeden. Rudolph is on the verge of scripting the best season ever for a Cowboy quarterback. Rudolph will use his NFL-ready arm against Big 12 defenses, a mismatch that’ll result in gaudy numbers and individual honors for the third-year starter. He’s both prolific and precise, throwing for more than 4,000 yards in 2016, yet only four interceptions. And with his top two receivers returning to Stillwater as well, Rudolph will challenge Mayfield as the league’s top quarterback.

Forget the Big 12. Mayfield will begin 2017 as the premier quarterback in the country. He’s coming off two terrific seasons in Norman, throwing for 76 scores, rushing for 13 more and piloting the Sooners to consecutive conference championships. As a junior, Mayfield set the single-season NCAA record for passing efficiency. All that’s left on the to-do list is to win a Heisman Trophy and a national title. Beyond the numbers and the individual awards, Mayfield is also one of college football’s most inspirational on-field leaders.

MORE: Top Returning Quarterbacks In All Of College Football For 2017 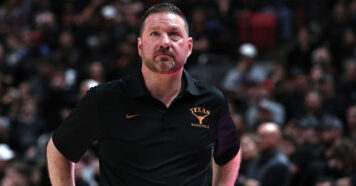