Of the 50 players who transferred up a level to a high-major program a year ago and took the court this past season, just two averaged more than a dozen points per game, and only three put up more than an average of 10 shots per game.

“Guys have to understand it’s basically starting over,” said Jeantal Cylla, who went from averaging 13.7 points in 2018-19 at UNC Wilmington to scoring a grand total of 29 points in 28 games this past season at Arkansas.

“The stats mean nothing once you leave there. You have to prove yourself all over again. It’s a risk,” he added.

Sure, there are success stories such as Jake Toolson, who went from averaging 15.7 points at Utah Valley two seasons ago to 15.2 points on a BYU team that won 24 games and finished the season ranked 18th in the country.

Luwane Pipkins struggled early last season at Providence after transferring in from UMass, but was terrific down the stretch, averaging nearly 20 points per game in the last six contests of the season.

Gonzaga took Ryan Woolridge from North Texas, and he had similar numbers on a team that was considered a national title contender.

But there are far more players who saw their playing time and production decrease significantly.

Nate Sestina saw his scoring average fall 10 points from 15.8 at Bucknell to 5.8 points at Kentucky.

Justin Pierce and Christian Keeling became role players at North Carolina, putting up a combined total of 11.4 points per game after transferring in from William & Mary and Charleston Southern, respectively, where they averaged a combined 33.6 points per game.

Bubba Parham averaged 21.4 points at VMI compared to just 5.2 points at Georgia Tech, and Lamarr “Fresh” Kimble put up 15.6 points at Saint Joseph’s and just 5.0 points at Louisville this past season.

The 50 players examined collectively averaged 6.3 points per game this past season, as opposed to 11.8 points per contest at their mid-major spots. Seven averaged in double figures at their new stops and just four were full-time starters for NCAA Tournament teams. 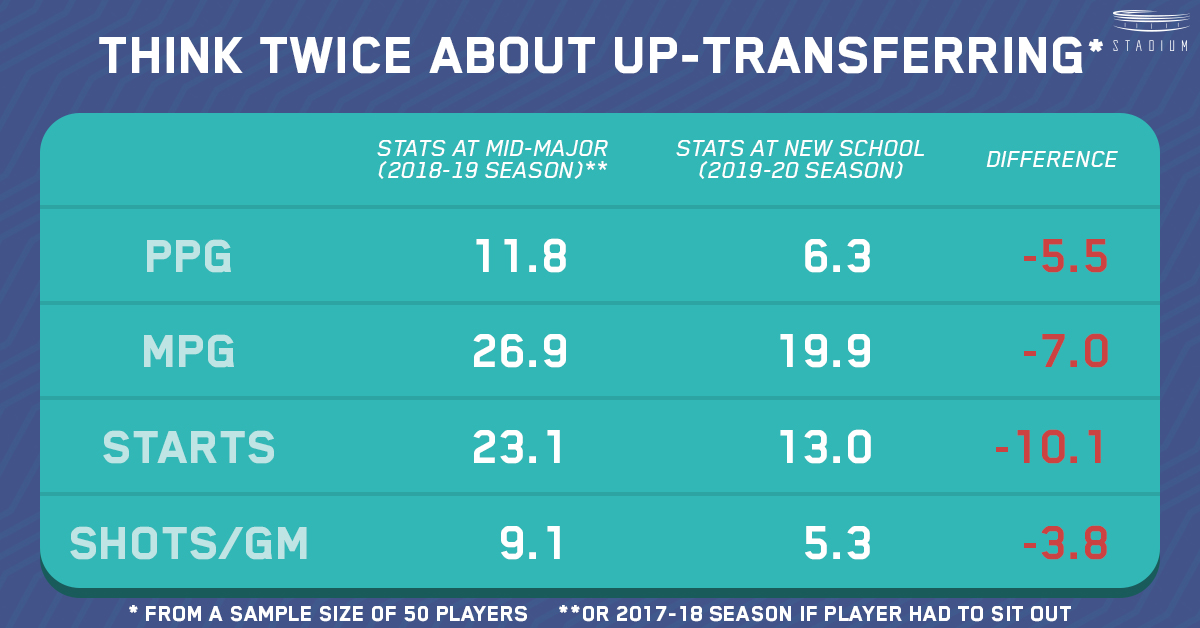 Pierce was a star in the CAA at William & Mary, and the plan was never to leave — until coach Tony Shaver was fired. Then the versatile forward became a hot commodity on the transfer market and ultimately chose North Carolina over Notre Dame and Michigan.

Pierce doesn’t regret his decision to play for one of the most storied college basketball programs in the country, but he admitted that the experience wasn’t without frustration, especially since the Tar Heels had a dismal season that came with plenty of scrutiny.

Part of the reason he chose UNC was to ensure that he played in an NCAA Tournament — which wasn’t going to happen if the Big Dance hadn’t gotten canceled due to the coronavirus outbreak.

“Overall, getting a chance to wear that jersey and play in front of those fans was something I’ll never forget,” Pierce said. “The positives definitely outweigh the negatives.”

But Pierce and Cylla both said that it was a major adjustment having to pick up a new system, playing for a coach that had limited familiarity with them and their games, and also meshing with new teammates.

That’s one of the reasons why Toolson was successful. He followed his coach, Mark Pope, from Utah Valley to BYU.

“I knew the coach, I knew the system,” Toolson said. “It’s a different setting, and better competition. But I also had better teammates to make me better.

“My situation was different than most other guys who transfer up a level. Familiarity was my biggest advantage.”

Chris Vogt chose a similar strategy, following John Brannen from Northern Kentucky to Cincinnati, and was also one of the few to see their production increase. The 7-foot-1 Vogt, then a sophomore, received a waiver and went from averaging 4.5 points in 12.9 minutes per game to 11.0 points in 28.5 minutes at Cincinnati.

Toolson and Haanif Cheatham, who went from Florida Gulf Coast to Nebraska, were the only two players that averaged more than 12 points per game. Toolson did it for a successful team, while Cheatham was the leading scorer (13.1 ppg) on a team that went 7-25 overall and 2-18 in the Big Ten.

“Things just move so fast,” Pierce said. “It’s hard trying to grasp everything, especially at a place like North Carolina where they don’t just roll the ball out.”

And that was with summer school on campus.

“I can’t imagine being a grad transfer this year with a shortened — or no summer,” Pierce said. “It’s going to be a mess.”

Even though Cylla only averaged seven minutes per game at Arkansas, he took no shots at Eric Musselman nor had any regrets.

“I’m a big believer that everything happens for a reason,” he said. “But I know that if I stayed at UNCW, I would have averaged 17 to 20 points a game. But I always wanted to experience big-time college basketball. It was cool to see how they live in the SEC, the travel, playing at Bud Walton (Arena).”

Cylla won’t lie, though. He thought he was coming to Fayetteville as a starter after he chose Arkansas over a host of other high-majors after taking his only campus visit. He was a player who scored a combined 984 points in his three previous seasons (two at FAU and one at UNCW).

“I actually thought I was going to average more points than I was putting up at UNCW,” he said. “A lot of transfers think like that. They think they’ve proven themselves, which they have.

“But it’s a new school, and it doesn’t matter what you did before. It’s why a lot of us struggle. We had big roles, and now we have to adjust to a small role.” 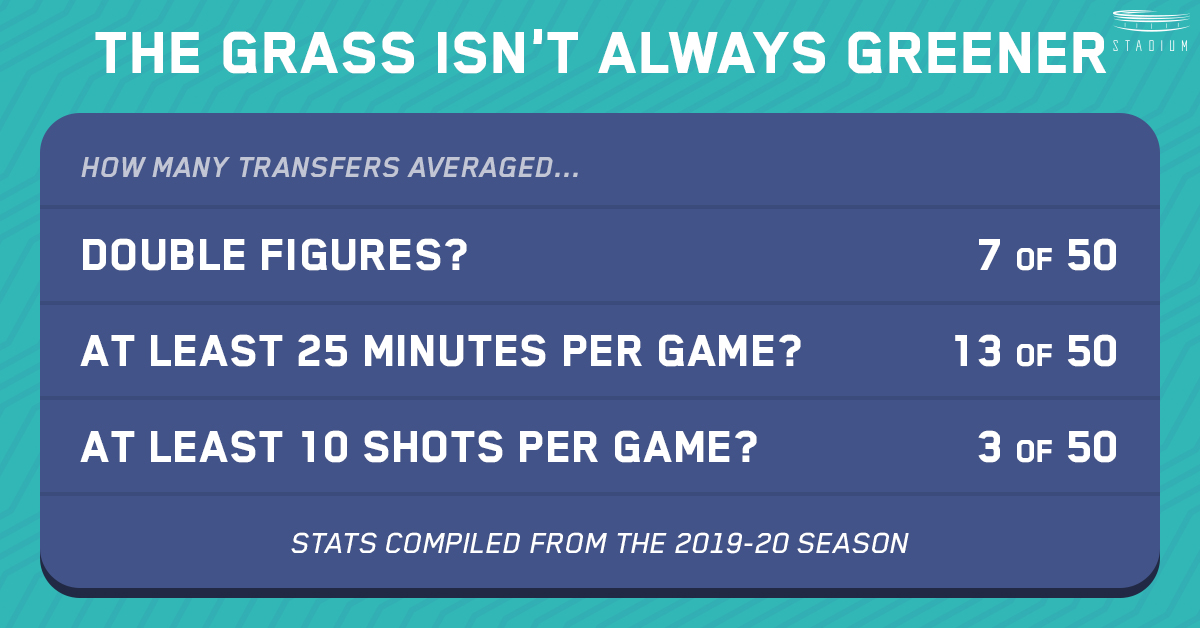 “I put winning ahead of everything else, but anyone who tells you that they aren’t concerned with their numbers is a liar,” Toolson said. “I was lucky I had unselfish teammates who played the right way and wanted to win, too.”

Toolson is hoping to get a chance to make an NBA roster, while Pierce is realistic and is hopeful that the experience of playing at North Carolina will help him land a contract overseas. Cylla is trying to stay optimistic that his decision to go to Arkansas won’t hinder his chances of playing professionally.

“Having Arkansas next to my name should be better,” Cylla wondered aloud. “But then again, no stats vs. 20 points a game at UNCW.