Urban Meyer gave Ezekiel Elliott some pretty high praise during an interview at the NFL Combine.

Urban Meyer made a stop by the NFL Combine set on Saturday, where he talked about the nation-leading 14 Ohio State players invited to Indianapolis.

One of those Buckeyes participating is superstar running back Ezekiel Elliott, who put on a good show. He clocked in at 4.47 seconds in the 40-yard dash and put up solid numbers across the board in all exercises.

Elliott was under some scrutiny for questioning the playcalling after the Buckeyes lost to Michigan State last season, but he knows he’s matured since then.

As far as football talent and intelligence are concerned, Meyer seems pretty confident with where he ranks Elliott.

“[Elliott’s] the best player I’ve ever coached without the ball in his hand,” Meyer said. “Think about that for a minute.”

The Ohio State coached highlighted Elliott’s ability to pick up pass blocking schemes and protect the quarterback while also showing extreme effort on the field.

Elliott was already considered a first-round pick, but if Meyer’s analysis is spot on, there’s going to be an NFL team with a star on its hands come April 28 at the 2016 NFL Draft. 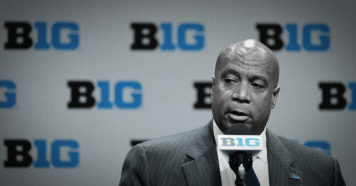 Big Ten Leading the Way With COVID-19 Protocols for Basketball

“The Big Ten has the best odds of pulling this off,” said one elite-level referee.