Villanova’s 8-4 start this year after winning the national championship last season puts the Wildcats in potentially dangerous territory when it comes to their NCAA tournament seeding and potential path for a deep run in the tournament.

Since the NCAA tournament expanded to 64 teams in 1985, only three reigning national champions have started the following season with a worse record than Villanova’s record this season through 12 games.

Only two of the previous five defending national champions that lost at least four of their first 12 games went on to make the NCAA tournament; neither advanced to the second weekend.

Here’s a look at the previous 33 defending national champions since the tournament expanded to 64 teams and how they fared in their first 12 games of their title-defending season. 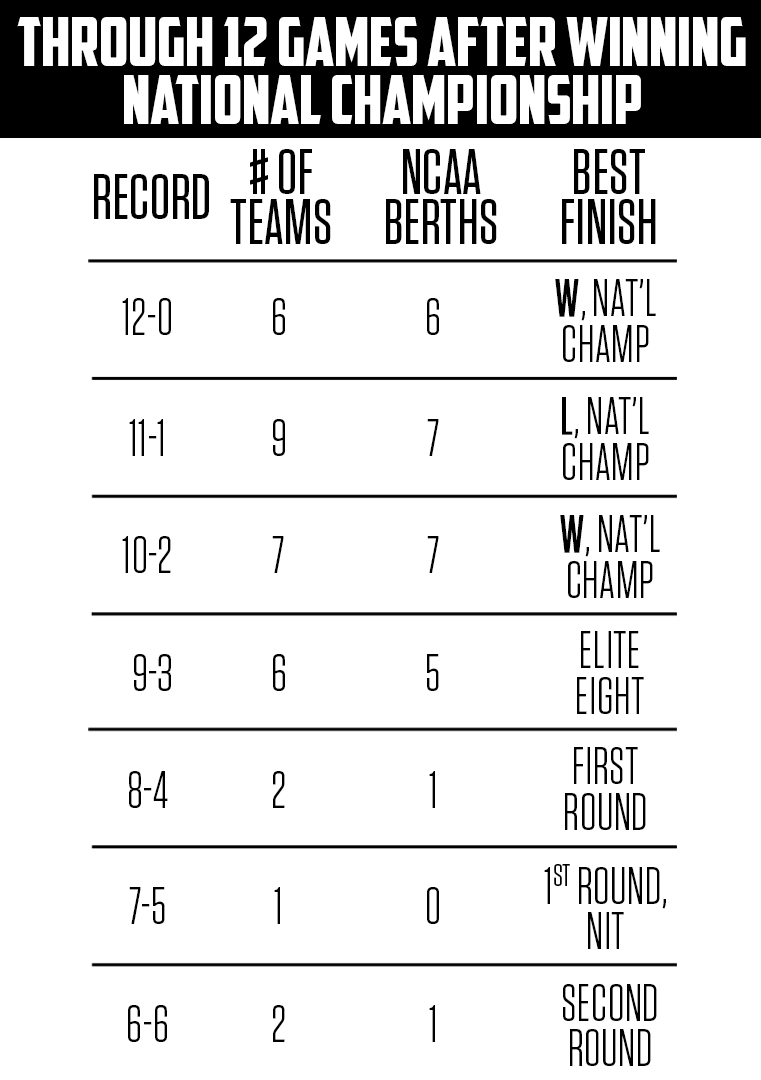 Two defending national champions — Kentucky in the 2012-13 season and Indiana in 1987-88 — also started 8-4 in their first 12 games the season after cutting down the nets.

The two defending national champions that lost at least four of their first 12 games and still made the tournament — Indiana in 1988 and Villanova in ’86 — earned a No. 4 seed and No. 10 seed, respectively.

Neither path is particularly favorable to advancing deep into the tournament, nor is the path of the teams seeded between a No. 4 and No. 10 seed.

After five straight seasons of earning a No. 1 or No. 2 seed in the NCAA tournament, Villanova is projected to have a bigger number — potentially much bigger — next to its name in March.

The Wildcats haven’t lost more than five games in any of the last five seasons.

They’ve already lost four before the start of the New Year.

Unless this season really goes off the rails for Villanova, the Wildcats probably aren’t in danger of missing the NCAA tournament at this point in the year, but their seeding will absolutely be affected by losses to Michigan (No. 1 in the NET rankings), Kansas (No. 5), Furman (No. 26) and Penn (No. 70). (However, if those NET rankings hold, Villanova’s losses may not look as bad in the selection committee’s eyes as they did in the moment.)

At this point in the season, Villanova doesn’t have the quality or quantity of wins to offset its losses. If anything, the losses might represent missed opportunities for good wins more so than glaringly bad losses.

The Wildcats have beaten Florida State (No. 33), Oklahoma State (No. 71) and Temple (No. 76) with their five other victories providing little value in terms of its year-end resume.

Villanova’s final non-conference game is on Saturday against UConn on a neutral court.

Here’s a look at Villanova’s non-conference resume so far this season with its losses in italics. 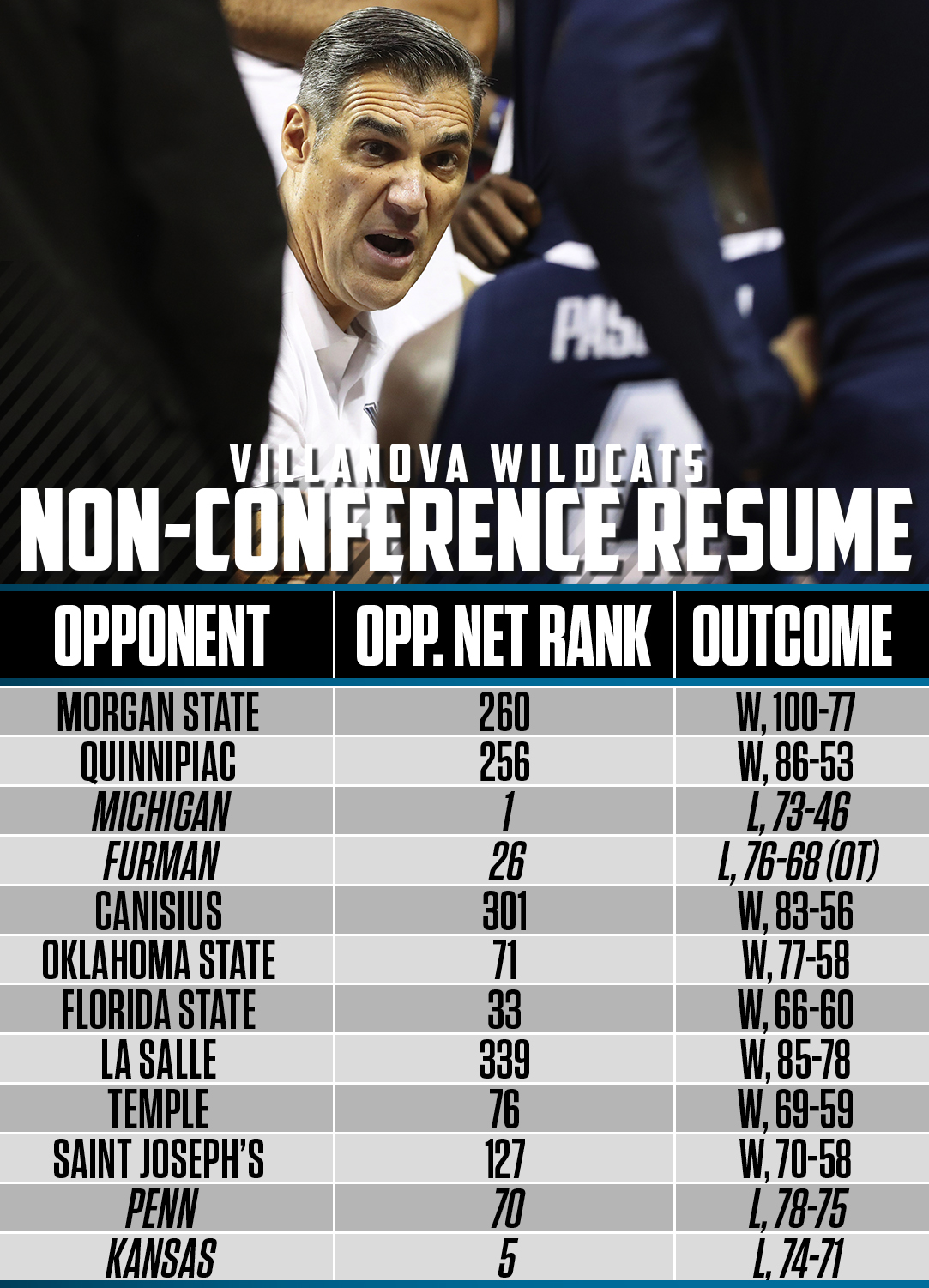 Marquette (No. 20), St. John’s (No. 27) and Butler (No. 43) are the only other Big East teams currently ranked in the top 50 of the NET rankings. Villanova is projected to win four of those six games, according to kenpom.com, as part of the Big East’s round robin conference schedule that allows every school to play the rest of the teams in the conference at home and on the road. The projections of kenpom.com see Villanova finishing the season with a 21-10 record and 12-6 record in Big East play. That’s the type of record that leads to a No. 6 to No. 11 seed in the NCAA tournament, depending on the quality of wins included in those 21 victories.

Villanova Coach Jay Wright has ushered in the most prosperous era of basketball in program history — one of consistent 30-plus win seasons, Big East regular season and tournament titles, No. 1 seeds, the development of future NBA players and most importantly, two national championships.

But this season will likely prove to be a transitional one for the program as fifth-year seniors Phil Booth and Eric Paschall lead a group of sophomores who are stepping into larger roles and a freshman class that has contributed little production outside of starter Saddiq Bey.