What would you say if someone told you that there are only 15 college basketball teams that currently fit the statistical profile of recent national champions?

Because as of Monday morning, that’s the number of schools that have comparable adjusted offensive and defensive efficiency marks to the last 17 national champions whose data is available on kenpom.com, which dates back to the 2001-02 season.

We’re roughly two-thirds of the way through the regular season, then there’s conference tournament action, so there’s still significant room for improvement or regression. Most schools have 10 to 15 games left, depending on how far they advance in their conference tournaments.

That means Michigan, Kansas, Villanova, Marquette and LSU all have work to do in order to join the group listed above, if we’re strict about the 113.0 and 96.0 baseline cut-offs for adjusted offensive and defensive efficiency, respectively.

[RELATED: Here’s Why Patience Is Important After a Recent Coaching Hire]

Eight of the last 17 national champions have entered Selection Sunday with an adjusted offensive efficiency of at least 120.0 and 11 have had one of 118.0 or better.

Generally speaking, that means legitimate national title contenders need to have a top-20 offense and top-30 defense when the NCAA Tournament bracket is revealed. Of course there are exceptions, like UConn’s 57th-ranked offense in 2014 or the 37th-ranked defensive units of Duke in 2015 or North Carolina in 2009.

But the Huskies also had the No. 12 defense in their most recent championship season, while the Blue Devils and Tar Heels both had a top-three offense.

Here’s a look at the pre-NCAA Tournament adjusted offensive and defensive efficiency for every national champion since 2002. 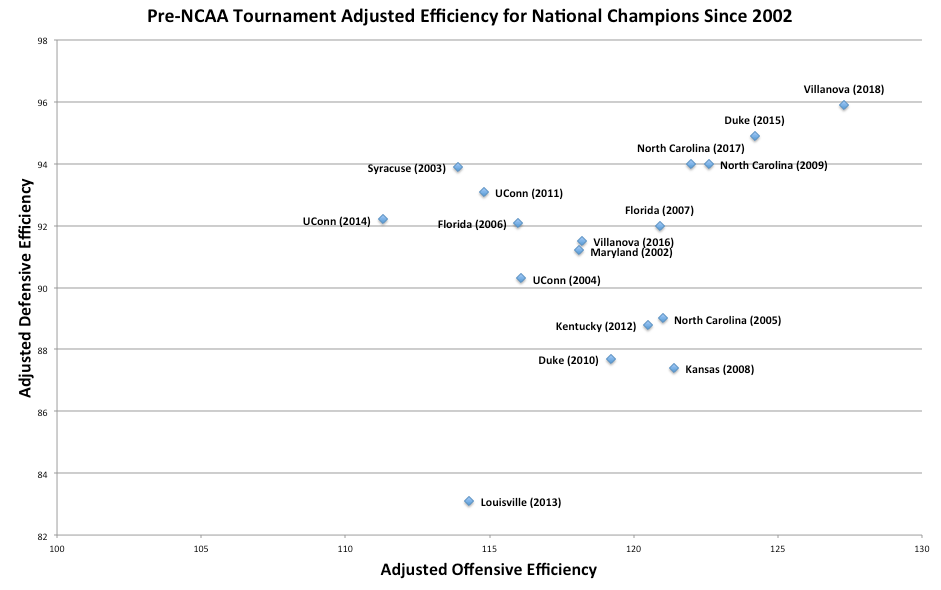 Now here’s a look at how current teams compare to past national champions. Schools that currently have an adjusted offensive efficiency of at least 113.0 and an adjusted defensive efficiency that’s better than 96.0 are graphed with a green dot. That means they’ve met both of the baseline requirements established above.

Schools that meet one of the two efficiency criteria outlined above  – but not both – are graphed with a red dot, indicating they likely need to improve on one end of the floor to fit the general mold of past national champions. 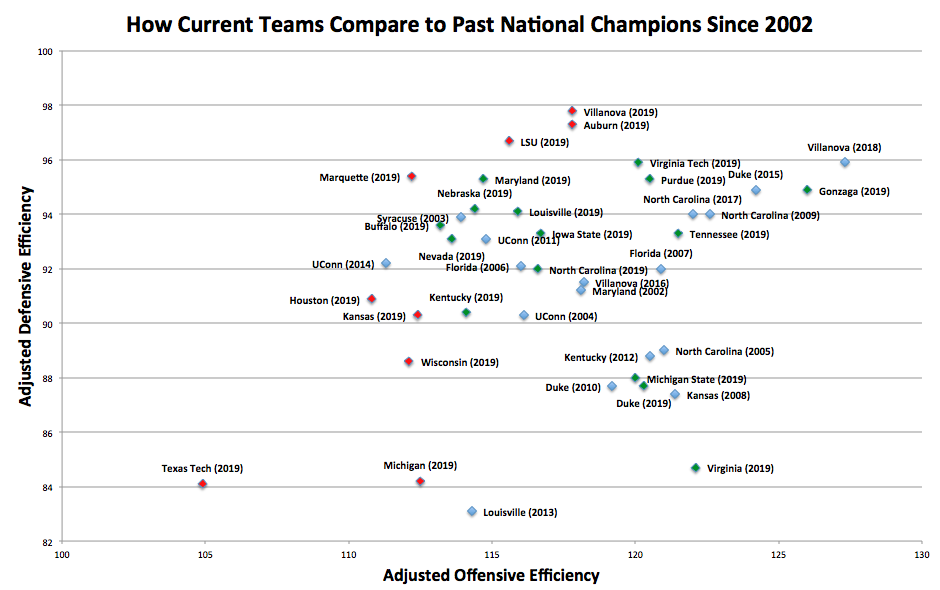 Or a team has just met the baseline efficiency on one end of the floor, while being absolutely elite on the other.

If we use 2018 Villanova and 2013 Louisville as the goal posts, graphically, for a true national championship contender, then there are only five teams currently that fit the mold of a typical national champion.

Virginia, Duke, Michigan State, Tennessee and Gonzaga are the only teams this season that also fall inside the Championship Arc, based on their adjusted efficiency through January 27. 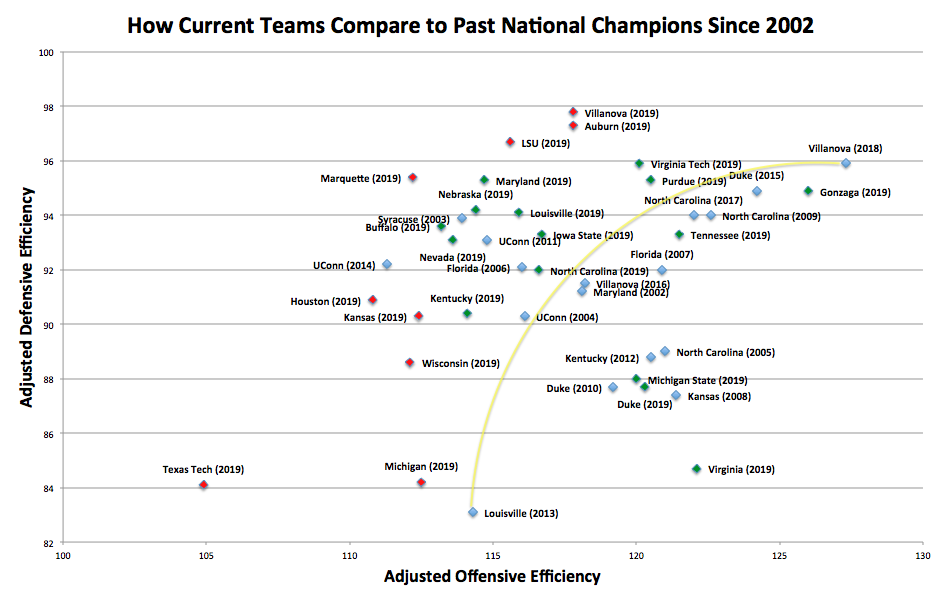 Once again, we’re roughly two-thirds of the way through the regular season, so there’s time for teams to improve. Michigan, North Carolina and Purdue are among the teams that lie just outside of the Championship Arc and they could potentially resemble – statistically speaking – 2013 Louisville, 2016 Villanova and 2017 North Carolina, respectively, with a strong close to the regular season.

But as February approaches, Virginia, Duke, Michigan State, Tennessee and Gonzaga have separated themselves from the rest of the sport as the top tier of national championship contenders.