WAC Basketball Coaches Rank the Best Jobs in the Conference

This is how polling in the WAC shook out among coaches who voted, with one being the best and nine being the worst: 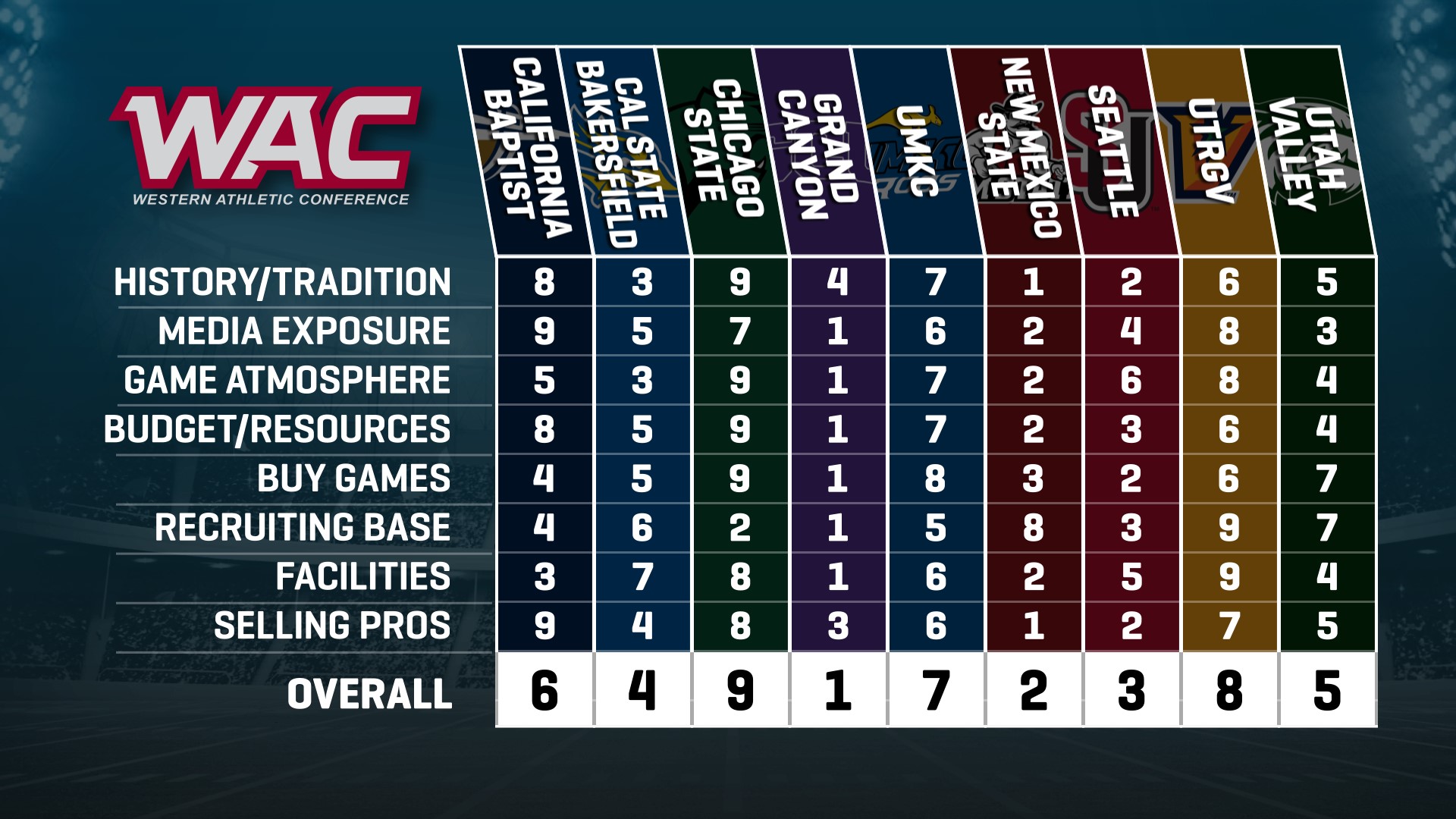 1. Grand Canyon (67) – Dan Majerle led the Antelopes into the D-1 ranks in 2013. The program had success in both NAIA and Division II, but it’s the best job in the league because it ranks first in game atmosphere, resources, recruiting base, TV exposure and also facilities.

Where they win: “The crowd is insane. Incredible home-court advantage. Location is great, right in Phoenix, and the budget is the best in the league. GCU prints money compared to everyone else.” – WAC assistant

Where they lose: “No tradition. Just went to Division 1. No downside other than being in the WAC.” – WAC assistant

2. New Mexico State (59) – The Aggies have history, reaching the Final Four with Lou Henson way back in 1970. They have a handful of Sweet 16 appearances on their resume, and rank second in the league in game atmosphere, TV exposure, resources and facilities. The lack of a recruiting base is its biggest drawback.

Where they win: “Tradition, fan support, name recognition and can get anyone into school. Can also take non-qualifiers — which is huge.” – WAC head coach

Where they lose: “Location. Las Cruces as a city, and also for the fact there aren’t many guys in the area, although they do have access to the JUCOs. Big arena, but it’s outdated.” – WAC assistant

Where they win: “Great location, best academic school in the league, and budget is right there with everyone except for Grand Canyon.” – WAC assistant

Where they lose: “They don’t belong in the WAC, and don’t have much recent tradition. They belong in the WCC, and need to upgrade facilities.” – WAC head coach

4. Cal State, Bakersfield (42) – The Roadrunners, who are leaving for the Big West next year, went to the NCAA tourney in 2016 and have one of the best game atmospheres, but are hurt by facilities.

Where they win: “Weather, it’s easy to get kids into school and easy to keep them in. It’s also the biggest show in town, and their support has gotten much better the last few years.” – WAC head coach

Where they lose: “Bakersfield. Go and you won’t even think you’re in California.” – WAC assistant

5. Utah Valley (41) – The Wolverines were in the Great West before joining the WAC in 2013. The location in Orem, Utah makes it difficult to recruit, but it’s in the top half of the league in just about everything else.

Where they win: “Great facilities. The venue is really nice. Largest student body in Utah, and they support the program.” – WAC head coach

Where they lose: “They don’t have a ton of money to recruit or to pay their staff, and there’s not much to do in Orem.” – WAC assistant

6. California Baptist (30) – The Lancers entered into D-1 in 2018 after being in the NAIA and D-2 ranks. Rick Croy’s program isn’t eligible for the NCAA Tournament until 2022-23. The lack of history hurts, but it’s in the top half of the league in game atmosphere, recruiting base and facilities.

Where they win: “The facilities are super nice. They didn’t half-ass it when they decided to go D-1. It’s a great location in Southern California.” – WAC head coach

Where they lose: “The fact that they can’t go to the NCAA tourney and don’t have any D-1 history. That’s probably it.” – WAC assistant

7. UMKC (28) – The Roos have never played in the NCAA Tournament, but made their first D-1 postseason appearance in 2017 in the CBI. They rank in the bottom half of the league in every single category — and have to play a ton of buy games.

Where they win: “Kansas City. The fans in the city love college basketball.” – WAC assistant

Where they lose: “The fans may love hoops in the city, but the fans in the city don’t care about UMKC. They don’t have support or facilities.” – WAC head coach

8. UTRGV (21) – Located in Edinburg, Texas, the Vaqueros changed their name from UT-Pan American a few years ago.

Where they win: “Man, I can’t think of many positives.” – WAC assistant

Where they lose: “Facilities — it’s a high school gym. The location is awful.” – WAC head coach

9. Chicago State (19) – The Cougars have been in the WAC since 2013. They rank high in recruiting base, but are either last or towards the bottom in everything else.

Where they win: “Chicago — both the recruiting base and where they play is actually a nice arena.” – WAC head coach

Where they lose: “It’s in a bad, bad part of Chicago, so you need to blindfold the recruits, and if you do that and walk them into the gym, then maybe you can get them. There’s just no fan support, no financial support and they have to play too many buy games.” – WAC assistant