WCC Basketball Coaches Rank the Best Jobs in the Conference

This is how polling in the WCC shook out among coaches who voted, with one being the best and 10 being the worst: 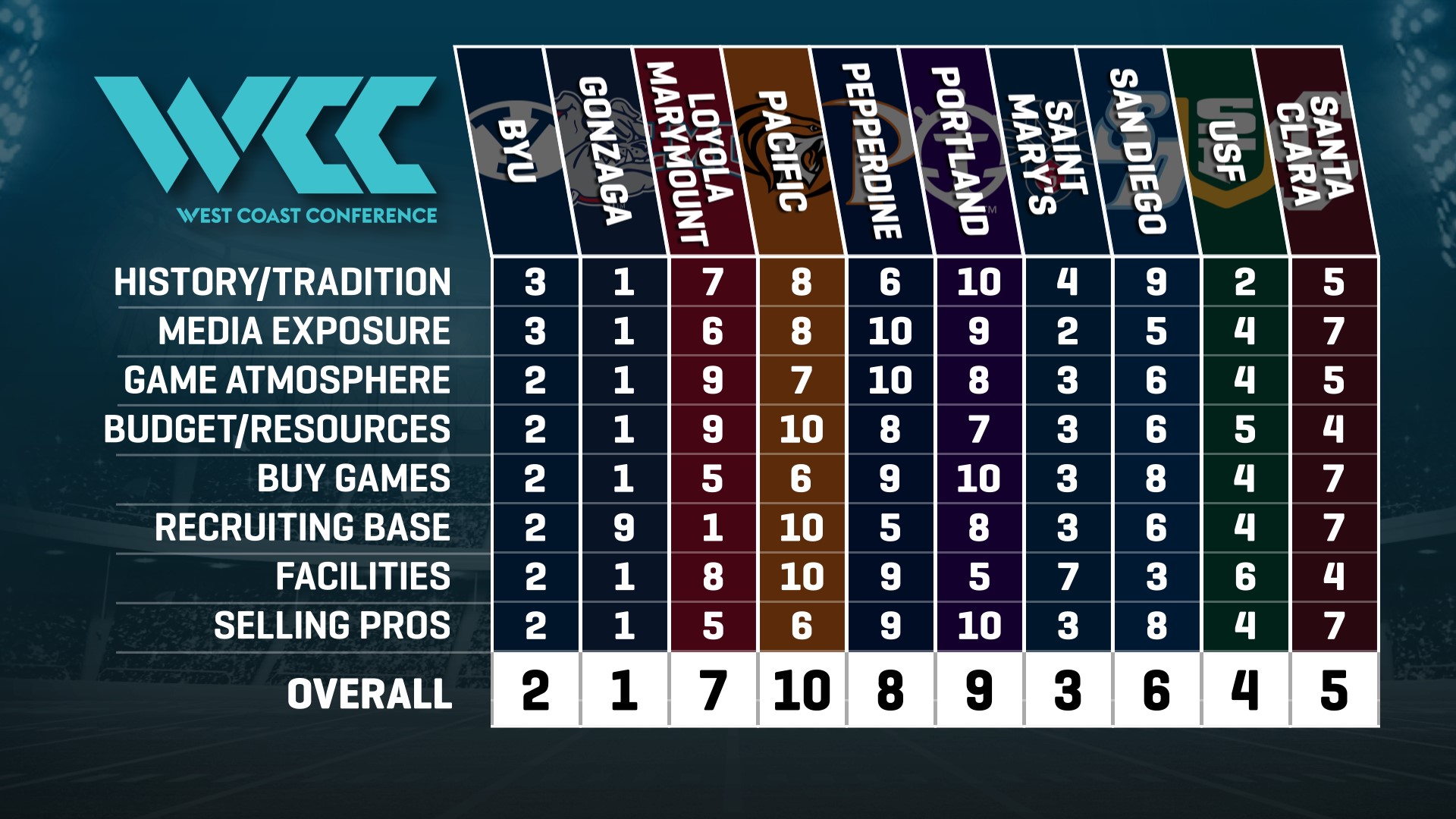 1. Gonzaga (72) – Mark Few has turned the ‘Zags into a big-time national program, reaching the tournament all 20 seasons that he’s been at the helm. They went to the National Championship game in 2017 and have been to four Elite Eights. They also have produced plenty of pros — including a pair of first-rounders this past year. Gonzaga checks in first in the league in every category except for recruiting base.

Where they win: “Where don’t they win? They have everything. Resources, history, the Kennel. Mark Few has made it into one of the best jobs in the country.” – WCC assistant

Where they lose: “Just the fact that there aren’t really any players in Spokane, but they don’t rely on that. They can recruit anywhere now, and they make a living out of going overseas.” – WCC head coach

2. BYU (69) – The Cougars have gone to three Elite Eights, seven Sweet 16’s and 29 NCAA Tournaments. There’s no shortage of history thanks to NBA players like Danny Ainge, Mel Hutchins, Fred Roberts and Shawn Bradley. BYU ranks within the top three in all our categories.

Where they win: “The following and the interest. It doesn’t matter where you go — to Starkville or LMU — they will have 1,500 fans there. The facilities are one of the best, and you’ve got a built-in recruiting base with the church.” – WCC assistant

Where they lose: “The inability to recruit certain kids, the honor code and the fact that so many kids go on missions, and that they are on a six-year clock instead of a four-year one.” – WCC assistant

3. Saint Mary’s (61) – The Gaels have played in 10 NCAA Tournaments, with seven of them coming since 2005. Randy Bennett has done a tremendous job in Moraga, especially since the facilities rank fourth from the bottom. Saint Mary’s has also produced its share of NBA players, including Patty Mills and Matthew Dellavedova.

Where they win: “They really support basketball. It’s a basketball school, and they have bought into that.” – WCC head coach

Where they lose: “Location is tough, and the gym is not very good. The first time I walked in I was like, ‘Holy smoke, we’re playing here?’” – WCC assistant

4. USF (53) – The Dons have history, but most of it came in the 1950s when they won national titles in both 1955 and 1956 with Bill Russell on the team. The program was shut down for a few years in the 1980s and hasn’t been to the NCAA tourney since 1998. The program ranks in the top six of the league in every category — and second in history.

Where they win: “Location. It’s a great city and there are players in the area. They have also tapped into the international market since it’s an international city.” – WCC assistant

Where they lose: “Facilities and just no recent history.” – WCC head coach

5. Santa Clara (44) – The Broncos have gone dancing 11 times, with their last NCAA Tournament appearance coming back in 1996. The program also produced Steve Nash and Kurt Rambis. Santa Clara ranks between fourth and seventh in every category, even checking in at fourth in resources and facilities.

Where they win: “Commitment to basketball. They have a nice little arena, a beautiful campus and they buy into basketball.” – WCC head coach

Where they lose: “Just no success in a long time. The Santa Clara name doesn’t carry any weight anymore.” – WCC assistant

6. San Diego (37) – The Toreros are probably best known for producing NBA coaches. Mike Brown, David Fizdale, Bernie Bickerstaff, James Borrego and Eric Musselman all attended USD. The program has played in the NCAA Tournament four times, including in 2008 when Bill Grier led San Diego to a first-round upset over UConn. The Toreros rank third in the league in facilities, but are towards the bottom in history, pros and buy games.

Where they lose: “The academic situation. It’s difficult to get kids into school.” – WCC assistant

7. Loyola Marymount (36) – The Lions have made the NCAA tourney five times with the last trip coming back in 1990 — just days after star Hank Gathers died during the WCC Tournament due to a heart condition. LMU tops the league in recruiting base, but is second from the bottom in game atmosphere and resources.

Where they win: “It’s a couple miles from LAX. It’s in an area with a ton of recruits.” – WCC assistant

Where they lose: “It’s about the 12th biggest thing in town, and that’s probably being way too kind. No one cares. They are lost in that city.” – WCC head coach

8. Pepperdine (27) – The Waves have gone to the Big Dance 13 times, but the last one was back in 2002. Pepperdine has also produced its share of NBA players from Doug Christie to Mychel Thompson to Dennis Johnson. Pepperdine ranks last in game atmosphere and TV exposure.

Where they win: “Malibu. It’s a beautiful place, but I’m not sure kids really appreciate it.” – WCC head coach

Where they lose: “The facilities. There are people coming in the visiting locker room at halftime, and you basically share a wall with the snack shack. You can smell the burnt popcorn coming through the wall.” – WCC assistant

9. Portland (21) – There’s not much history with the Pilots, having gone to a pair of NCAA Tournaments in 1959 and 1996. They are probably best known for producing NBA coach Erik Spoelstra. Portland ranks last in history, pros and buy games.

Where they win: “It’s one of the nicer facilities, and you’ve got the city of Portland that you can sell.” – WCC head coach

Where they lose: “The lack of any sort of tradition, and any following. They are a non-factor in Portland.” – WCC head coach

Where they win: “It’s a really tough job… Maybe the fact that they had history way back when, and I’ve heard they can get anyone into school.” – WCC assistant

Where they lose: “The place is a dump. It looks like nothing has been done to the arena since it was built. There aren’t any showers in the visiting locker rooms.” – WCC assistant