Have you ever wondered how the Denver Broncos would look with a certain Michigan man roaming the sidelines in his pleated khakis?

We did too, which inspired us to compile a list of all of the NFL’s current head coaching vacancies and fill each opening with a current college coach.

While the highly-coveted Oklahoma head coach just signed an extension to remain with the Sooners, who wouldn’t want to see Lincoln Riley reunited with Baker Mayfield in The Land?

As Freddie Kitchens showcased, Mayfield’s skillset is perfect for today’s high-flying, pass-first offense, which is why the man who unleashed Mayfield in college is the perfect candidate for Cleveland.

Riley’s hiring would immediately make a young-but-talented Browns squad a serious contender in the AFC for 2019.

Twitter would rightfully explode if Joey Freshwater started dialing up plays for future Hall of Fame QB Aaron Rodgers. This match made in hell will definitely never occur, but I’d love to see Green Bay pull off a different kind of untraditional hire this offseason…

Maybe they could “promote” Rodgers to player-coach?

While that’s not happening either, don’t fret; we’ll always have this ridiculous hypothetical marriage of the Pack and Lane Kiffin to reflect upon when Rodgers angrily throws his Microsoft Surface Book at Josh McDaniels during a bumpy three-and-out against the Detroit Lions in Week 3 next season.

There doesn’t seem to be a program that the 43-year-old Matt Rhule can’t turn around. At Temple, he inherited a 4-7 roster and quickly propelled it to the top 25. At Baylor, he led the Bears to a Texas Bowl victory last week, just two years after the program was engulfed in a disturbing sexual assault scandal. Rhule has shown that he can coach with the best of them.

But if he really wants to prove his mettle, he’d take the Bucs job.

Other than a six-year stretch from 1997-2002 in which Tampa Bay made the playoffs five times and won Super Bowl XXXVII, the Buccaneers have consistently been an NFL basement dweller. Cycling through four head coaches in eight years doesn’t help your franchise find stability.

Tampa could end that unfortunate trend by hiring Rhule, a true “leader of men” (yes, that’s an idiotic cliché that grown men who obsess over teenaged football recruits on message boards use, but it’s still a trait that GMs look for in an NFL coach) that they’ve desperately been searching for since firing the $100 Million Dollar Man, Jon Gruden.

Save your job and give Rhule a call, Jason Licht.

In order to get the most out of QB Sam Darnold’s rookie contract, the Jets must bring in an offensive-minded head coach who can design an offense around the 21-year-old signal-caller’s strengths.

By hiring the innovative Kliff Kingsbury — who also groomed potential NFL MVP Patrick Mahomes during their time together in Lubbock — New York would achieve just that.

As a fan of media circuses, it’s also exciting to think of the frenzy that would coincide with the suave coach’s arrival in the Big Apple.

John Albert Elway Jr. has brought championships to Denver as both a Hall of Fame QB and front office executive, but the Broncos GM has struggled in recent years.

From drafting former Memphis QB Paxton Lynch in the first round to hiring, then firing Vance Joseph in a matter of two seasons, the Duke of Denver has bungled the Broncos’ standing as one of the NFL’s most consistent franchises.

How does Elway get it back on track? Lure Jim Harbaugh away from Michigan.

Harbaugh has notched three 10-win seasons during his four years in charge of his alma mater, but it doesn’t feel like he’ll ever be able to get over the Ohio State-sized hump — even with Urban Meyer on his way out.

A chance to return to the NFL, where Harbaugh was potentially a play away from winning Super Bowl XLVII with the San Francisco 49ers, offers Harbaugh an opportunity to finally win a title and silence his critics.

And considering the reclamation project that Harbaugh spearheaded with Alex Smith back in 2011, maybe he could get the most out of Case Keenum so that Elway doesn’t have to waste another pick on an inferior American Athletic Conference QB.

Behind his stoic demeanor and 82-26 record with the Cardinal, David Shaw has quietly built a steady juggernaut in the Pac-12 over the last eight seasons.

That constant success is why his name always pops up as an intriguing option for NFL teams on the lookout for a new head coach after the annual Black Monday purge decimates a chunk of the league’s coaching staffs.

If you’re Shaw and a floundering franchise like the Dolphins — who last won a playoff game on December 30, 2000 — calls, would you pick up or immediately send them to voicemail?

As lovely as South Beach is, you’re probably doing the latter once you realize that you’re smack in the middle of one of the best coaching situations that college football can offer.

But if you’re Miami, you should still do your due diligence on one of the game’s best coaches, who played for both Dennis Green and Bill Walsh, coached NFL MVP Rich Gannon and helped mold Andrew Luck.

Someone with Shaw’s offensive prowess could assist in answering a very important question for Miami: Is Ryan Tannehill actually any good?

It doesn’t matter if he’s been in the WAC, Mountain West or Pac-12, Chris Petersen has dominated during his impressive collegiate coaching career.

That’s why the former Bobby Dodd Coach of the Year Award winner would be an ideal fit for the Bengals, who just fired Marvin Lewis after 16 seasons with no playoff victories.

Although Lewis brought respectability to a Cincinnati franchise that was mostly the laughing stock of the NFL throughout the two decades prior to his hiring, his teams always failed to show up in the postseason.

Petersen, on the other hand, is responsible for one of the biggest postseason upsets in sports history.

The unique offense that Petersen runs would work wonders for a Cincy roster that boasts A.J. Green and Joe Mixon. If Tyler Eifert re-signs and stays healthy, the Bengals would have one of the league’s most explosive offenses with Petersen running the show.

He’s not going anywhere until he at least reaches a College Football Playoff with the Longhorns, and who can blame him? He’s making more than $5 million a year and gets to awkwardly hug a tipsy Matthew McConaughey on the sideline after huge wins.

What more could you ask for in life?

But selfishly, I’d love to see Herman get his hands on Josh Rosen, a quarterback who could emerge as the next Jared Goff with the right coach OR be remembered as an opinionated and introspective version of Kyle Boller.

With an accomplished offensive coach like Herman, I think that we’d witness the former hypothetical happen, but even that’s a pipe dream if Steve Keim makes another disastrous hire like he did with one-and-done Steve Wilks. 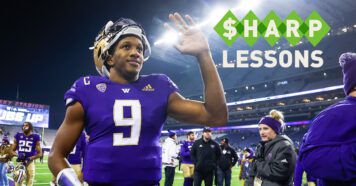 Crunch time in the NFL.