Here’s The Deal: It’s the Jayhawk opener while SE Missouri State is coming off a 77-0 pasting of Missouri Baptist that took a while to get going because of weather, but then the fun kicked in. The Redhawks are starting out a tough stretch, dealing with KU this week and them having to be ready to roll for a key game against Southern Illinois, while the Jayhawks are simply looking to start the season off with something positive before going to Duke. With the way SEMO threw the ball last week, this should be a good tune-up to get ready for the Blue Devils.
Why SE Missouri State Might Win: Will the Kansas offense actually work? A disaster throughout last year, the Jayhawks have to break in a new attack. Kansas is moving more towards a spread attack under offensive coordinator John Reagan, and this becomes the test game to see if it all worked – there’s a chance it won’t, at least early on. If SEMO can use its hot passing game keep the pressure on and make the KU offense start to press, there could be problems.
Why Kansas Might Win: The Bears aren’t that big and aren’t going to generate much of a pass rush, if any. There’s only one player on the O line over 290 pounds, and while the group relies on its quickness, it’s not going to barrel away against the KU defensive front. The Jayhawk secondary has the potential to be the team’s biggest strength, and while bombing away against Missouri Baptist is one thing, the big plays won’t come this week.
Who To Watch Out For: Montell Cozart, you’re it. Jake Heaps was supposed to be the main man when he came in from BYU, but that didn’t work out and now he transferred to Miami after Weis anointed Cozart the starter – it’s sink-or-swim time. Can Cozart start to throw a bit better? More of a runner so far, he failed to throw a touchdown pass in his limited time, but he finished third on the team in rushing. If he fails, there will be a new coaching staff in 2015.
What’s Going To Happen: 1-18 all-time against FBS teams, SEMO isn’t going to pull off the upset, but it’s going to have a few moments in the first half when it’ll look like it could. The Kansas offense isn’t going to be humming, but it’ll run well in the second half.
Prediction: Kansas 31 … SE Missouri State 14
Line: No Line o/u: No Line
Must Watch Factor: (5: Hacked and Leaked Photos of Kate Upton – 1: Hacked and Leaked Photos of Kate Upton and Justin Verlander) … 1

Here’s The Deal: Coming off a terrific 13-3 season, Towson started out a bit of a rebuilding year with a clunker, losing 31-27 to Central Connecticut State to start out its season. This is still a good, sound program that has the potential to be stronger as the year goes on, but it’s going to take a little bit before it starts to come together to be at the 2013 level. West Virginia came up with a strong performance in the 33-23 loss to Alabama, throwing well and hanging around until the Crimson Tide ground game took over. With a road trip at Maryland and the Big 12 opener against Oklahoma up next, this is workout time. The Mountaineers have to show up, but this is where they get the ground game working.
Why Towson Might Win: While the defense didn’t generate too much pressure against CCSU in the opener, the Tigers have the blitzing, attacking scheme that might be able to get to Clint Trickett just enough to throw off the passing attack. The defense had big problems last week, but the ground game worked well with Darius Victor and Connor Frazier combining for 185 yards and three scores, helping the team averaged 5.6 yards per carry. The goal will be to run first, run often with an offense that returned just three starters going into the opener, however …
Why West Virginia Might Win: After dealing with the Alabama running game, Towson’s will be a piece of cake. The Tigers have a little bit of size up front, but there’s not much in the way of depth and there’s no size at linebacker – their outside linebackers are built like slot receivers. West Virginia doesn’t do much with the power game, but this week, the pressure should be off Trickett and the air show and right on …
Who To Watch Out For: The Mountaineer running backs. Pitt transfer Rushel Shell had one nice run last week, but there wasn’t any room to move for a ground game that finished with just 28 yards on 24 carries – but that’s Alabama. Dreamius Smith, Wendell Smallwood and Dustin Garrison will all be a part of a ground game that should easily blow past the 200-yard mark.
What’s Going To Happen: West Virginia’s offense is going to enjoy not having to go against a slew of NFL-caliber defenders. It’ll be over at the half.
Prediction: West Virginia 49 … Towson 14
Line: No Line o/u: No Line
Must Watch Factor: (5: Hacked and Leaked Photos of Kate Upton – 1: Hacked and Leaked Photos of Kate Upton and Justin Verlander) … 1

Here’s The Deal: There’s no question that Baylor is going to win the game, but how’s it going to happen and who’s going to be under center? Star QB Bryce Petty says he’s okay after suffering an injured back, but is he needed to beat a Demon team coming off a loss to Missouri State? Baylor has to go on the road for the next three weeks against Buffalo, Iowa State and Texas, and everything appeared to be finely-tuned against SMU, but every coaching staff likes to tune things up and every player wants to be out there. This week, Baylor can call its shot, but it might be a chance for the backups to show what they can do.
Why Northwestern State Might Win: The Demons had Missouri State in trouble, but the defense couldn’t hold on. The passing game was terrific with Zach Adkins throwing for 318 yards and showing enough explosion to potentially keep up for a little while if Baylor’s defense isn’t focused.
Why Baylor Might Win: The Bear defense allowed just 67 yards of SMU offense last week – it’s locked int. The Demons blew it last week by being sloppy with turnovers and poorly timed play from the defense. It took a while for Missouri State to wake up, but if Baylor can play like it did last week when it kicked things off with 24 first quarter points and a big scoring drive to start out the season, this might be over in five minutes.
Who To Watch Out For: Petty is saying all the right things about wanting to start, even with the two cracked bones in his back, but even if he was 100% healthy, the Bears would come up with a backup plan. Seth Russell appears ready to be the next man up in terms of Baylor high-powered quarterbacks, completing 13-of-23 passes for 124 yards and a score against SMU. Russell, a 6-3, 215-pound sophomore, is a terrific athlete with tremendous speed and a nice arm – all that’s missing is time. Considering Petty is already hurting, there’s a chance Russell could be the key to the 2014 Big 12 season. He needs to be prepared, and this is the game for it.
What’s Going To Happen: Baylor isn’t going to let up now. It’s a focused team on a mission, and Northwestern State will be just a speed bump.
Prediction: Baylor 52 … Northwestern State 7
Line: No Line o/u: No Line
Must Watch Factor: (5: Hacked and Leaked Photos of Kate Upton – 1: Hacked and Leaked Photos of Kate Upton and Justin Verlander) … 1

Here’s The Deal: If defense moves your needle, go out late Saturday night. Texas Tech and UTEP figure to post gaudy offensive numbers this weekend, with both teams traveling up and down the field. The Red Raiders dodged a Week 1 bullet, courtesy of a sloppy effort and a good effort from Central Arkansas. Tech will try to fix its problems against a Miner team that also started with a seven-point win. UTEP held off rival New Mexico for the fast start coach Sean Kugler desperately needed.
Why Texas Tech Might Win: UTEP is ill-equipped to slow down Kliff Kingsbury’s attack. The Miners house one of the nation’s worst defenses, bad news with the Air Raid swooping into town. QB Davis Webb is comfortable in the system, and his receivers are coming along. Tech might also consider a bigger role for RB DeAndre Washington since UTEP is so ineffective against the run.
Why UTEP Might Win: The Red Raiders are going to score. The Miners are liable to keep pace, especially since Tech is struggling on defense. QB Jameill Showers can make the ball whistle, but it’s the UTEP backs that’ll keep Tech on its heels. Aaron Jones and Nathan Jeffery form a productive tandem on the ground. Jones is especially lethal, shredding the Lobo defense for 237 yards and three scores on just 22 carries a week ago.
Who To Watch Out For: Jones is going to be handful for Conference USA defenses in 2014. Texas Tech, too, is worried about the sophomore. Someone will need to monitor Jones at all times, including on swing passes. Red Raider LB V.J. Fehoko, a Utah transfer, could be called upon to keep No. 29 from getting to the edge.
What’s Going To Happen: A Sun Bowl shootout is inevitable since both teams possess weapons and a dearth of defensive stoppers. Jones is a game-changer, but his efforts will fall short, as the Miner D wilts in the face of the Red Raider passing game.
Prediction: Texas Tech 47 … UTEP 27
Line: Texas Tech -20.5 o/u: 63.5
Must Watch Factor: (5: Hacked and Leaked Photos of Kate Upton … 1: Hacked and Leaked Photos of Kate Upton and Justin Verlander) … 2 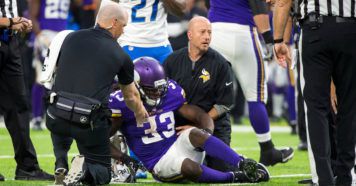